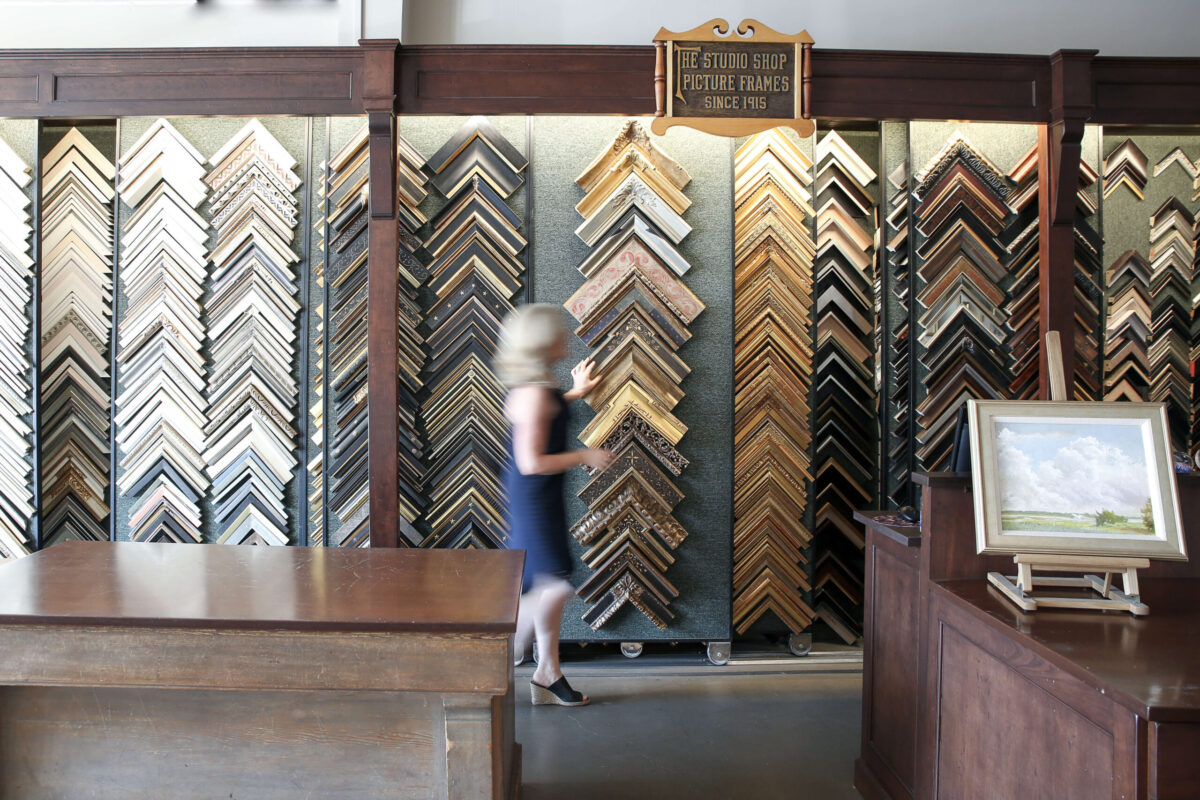 Janet Martin possesses an intuition, inherited from her father and refined over decades of practice, that allows her to promptly match a piece of art with its most suitable frame.

Within minutes of assessing a canvas, she’ll swiftly rummage through the thousands of options catalogued in her memory to produce its ideal framework.

“I get really excited when I match frames with art,” Janet says. “A lot of artists can’t afford the right frame so they just pick something in stock, but there’s a harmonious relationship between the frame and the art; if it’s not right, the eye will not land on the artwork. It’s an extension of the art.”

Such unification is a daily practice at the Studio Shop Gallery, a cornerstone downtown Burlingame business that’s both a custom frame shop and a fine art gallery. 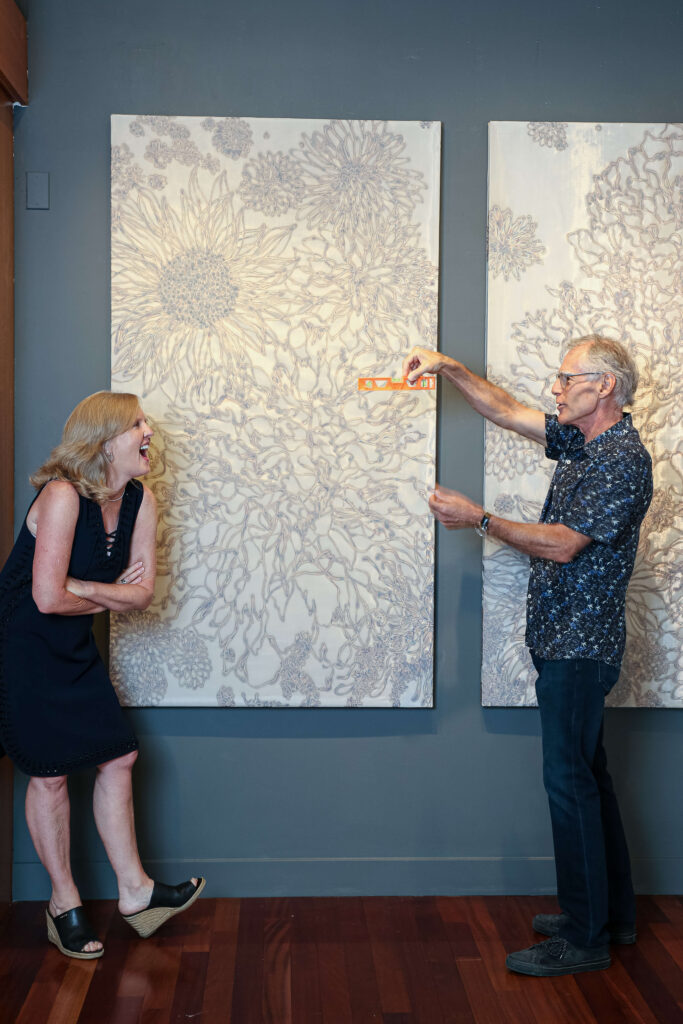 Janet and her husband Carl, two Burlingame natives who met in the orchestra at Lincoln Elementary School, have been at the helm since 1994. The duo continue a unique tradition of managing a couple-run business; they took over from Janet’s parents, John and Martha Benson, who had purchased the shop in 1955 from the founding Crawford family.

As the oldest business in Burlingame (and oldest art gallery in the state), the Studio Shop Gallery commemorates 105 years of matching the perfect frame with its art counterpart in the exhibit Every Day is a Miracle, showcasing local talent on Studio Shop walls until November 18.

The exhibition spotlights ten new artists over the course of ten weeks. In lieu of a traditional large anniversary celebration and group art shows, the Martins will host one artist a week to intimately display their work in mini private receptions for up to four people at a time.

It’s a first for the shop that has withstood the hardships of multiple World Wars, recessions and pandemics. The Martins prevailed by tapping into their creative side. During their months of sheltering in place, they adopted a new online sales system that allows them to market their art inventory across the country. And the ingenuity behind the new exhibit—facilitating personal one-on-ones with the artist as opposed to bustling art parties—perpetuates this spirit of revival. 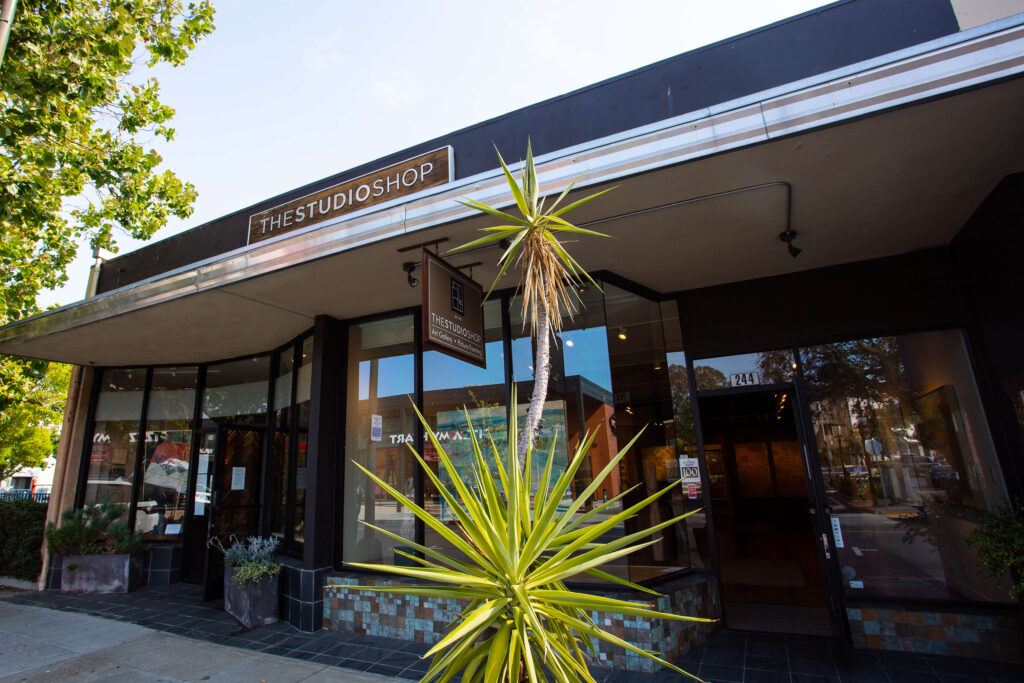 “The business feels like it’s in a rebirth,” Janet explains. “With the exhibit we’re having, ten artists in ten weeks, my creative side feels like it’s coming out. We wanted to create something so that the artists could go out and show their work. We asked, ‘What can we do to support them and their work?’”

“I like how the artist captures a particular moment in her paintings. Being able to stop the crashing waves for a swift moment and to emerge in the beauty of the ocean is a special gift. Brookman’s unique method of using multiple layers of wax and pigment creates the perfect movement in her work and makes it so interesting to look at.” 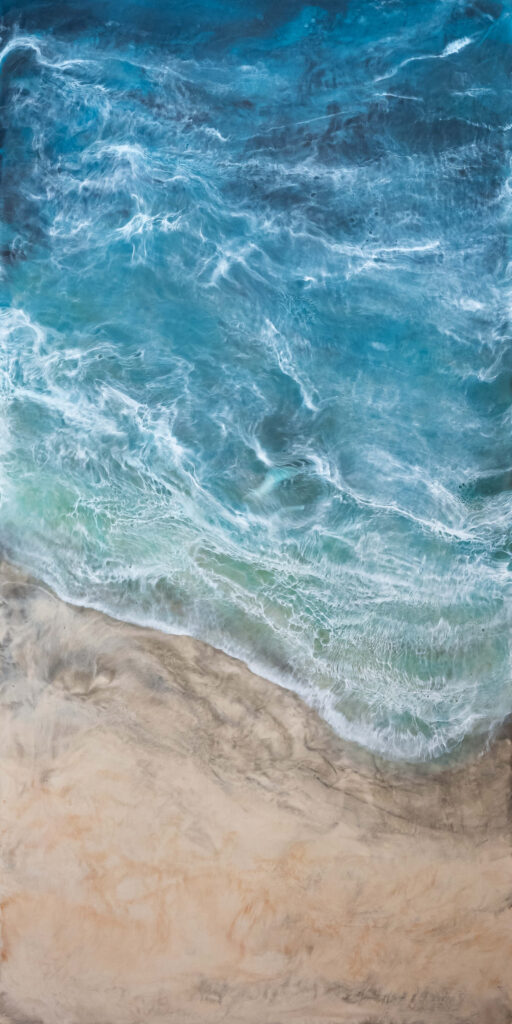 Stepping into the shop on a recent afternoon reveals a harmonious duality between the frame shop and the art gallery—perhaps best represented by the Martins themselves. Janet is at the front desk, the face of the business, while Carl works on a frame in the back workshop. When asked who’s the art piece and who’s the frame in the relationship, Carl remembers a Halloween costume the pair crafted many years ago.

“We made a box around Janet where she was the artwork and I was the artist. She was Mona Lisa and I was da Vinci. Maybe you are the picture,” he says, complimenting his partner. “You’re the pretty one.”

“You’re handsome,” she smiles back. “We had a designer years ago who explained how the frame was like the person doing your hair and makeup.” 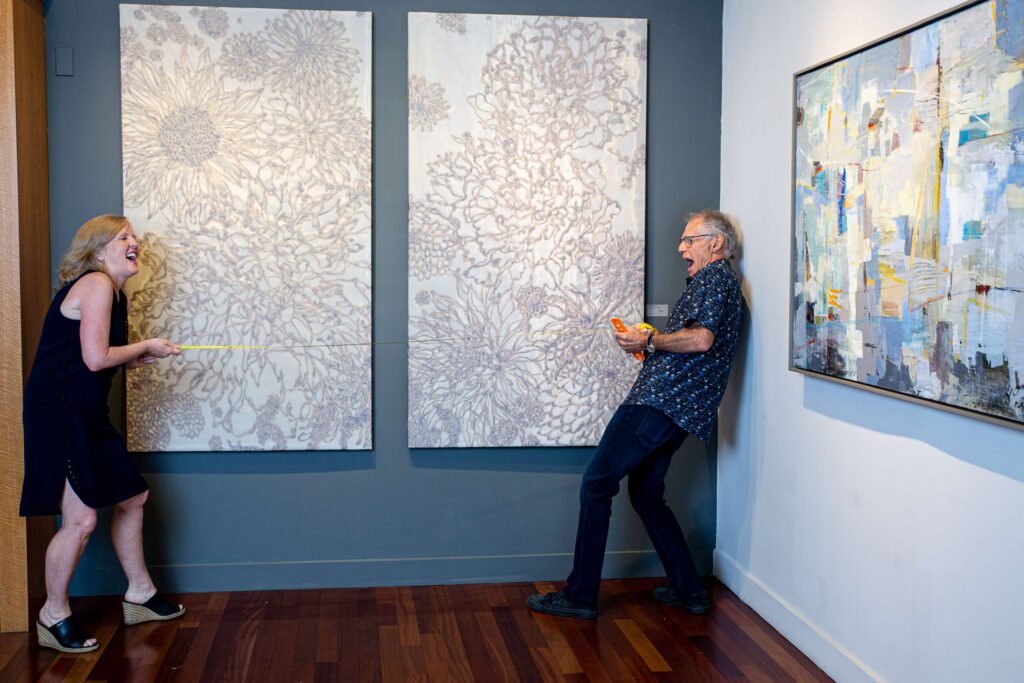 Carl fondly recalls the day in the fifth grade when Janet played cello and he was in the back of the orchestra on the trombone. They attended Mills High School together and started dating on New Year’s Eve between 1977 and 1978 when they shared their first kiss in Lake Tahoe. The couple married in 1985 and raised two sons in a home close to Burlingame High School.

The walls in their house showcase paintings by the likes of Jasper Johns, George Condo and Roland Petersen. When strolling through a museum, they tend to admire the frame before the art itself.

Carl continued with the trombone and has played in classical, jazz and Latin bands. During quarantine, he improved his ability on a unicycle to be able to play trombone while cycling.

“When I see Petersen’s most recent painting, The Swingers, I see pure joy and happiness. Despite sheltering at home for months, and personally struggling with health issues, the 94-year-old artist still finds great joy in what he is doing. I can feel the positive energy the painting radiates and it makes me want to get on a swing.” — Janet 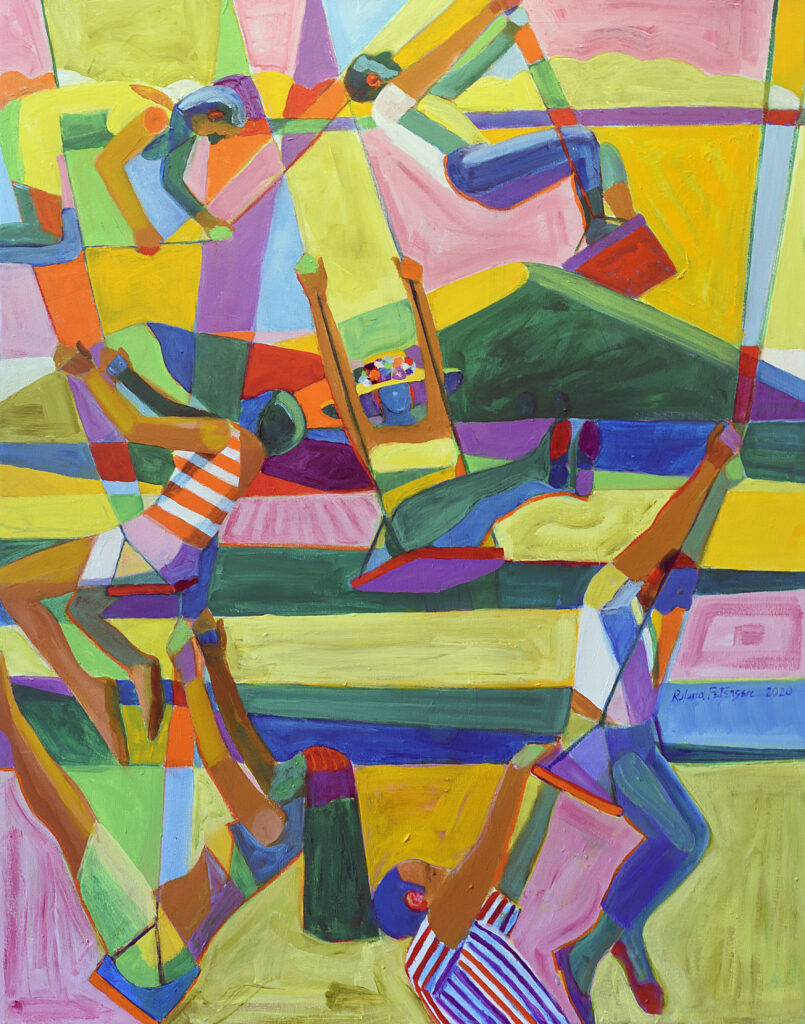 As a child, Janet swept and dusted the Studio Shop while observing how her mother and father dealt in art and matched works with their frames. She supported herself as a wood sculptor prior to taking over the shop and recently earned her master’s in intuitive medicine from the Academy of Intuition Medicine during the downtime earlier this year.

Initially, the couple planned to title their 105th anniversary show Reflections but pivoted after Carl awoke one morning with a change of thesis.

“We reflected for a while how the studio shop survived the 1918 Pandemic, the Great Depression and two World Wars,” Janet says. “You get to the point where you’re here today and really feel how ‘every day is a miracle.’ It had us feeling more optimistic. And after that, the next step is to be grateful.”

“Mirang’s work resonates with me in particular, because of her one-of-a-kind way of making art. Inspired by nature, she uses multiple layers of stainless steel mesh and gold leaf to create stunning pieces of art. Her work feels very authentic and powerful.” — Janet 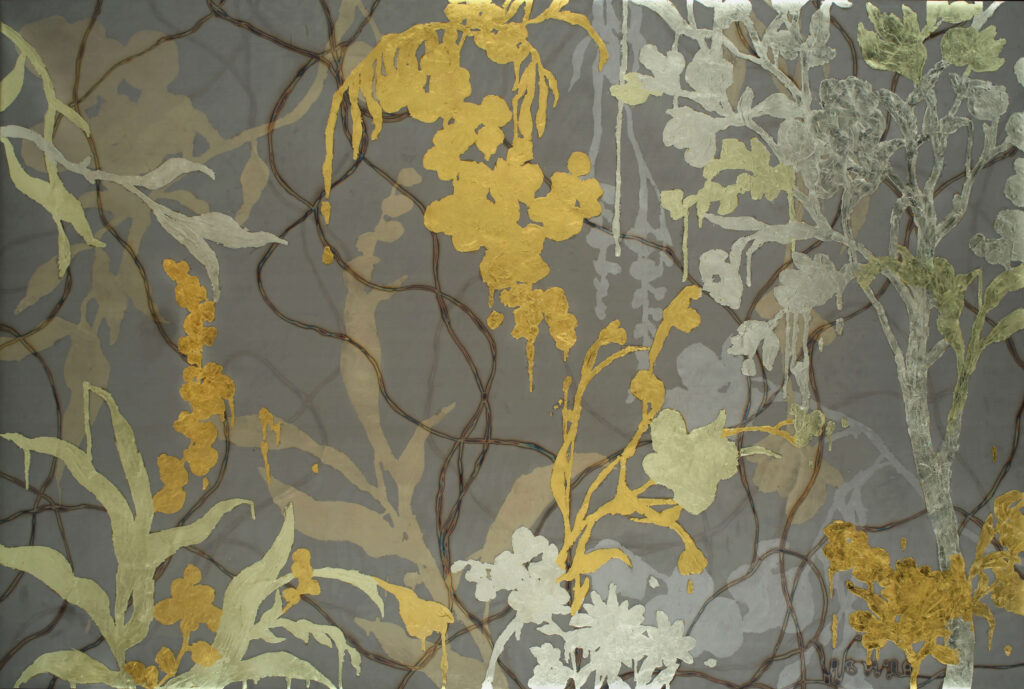