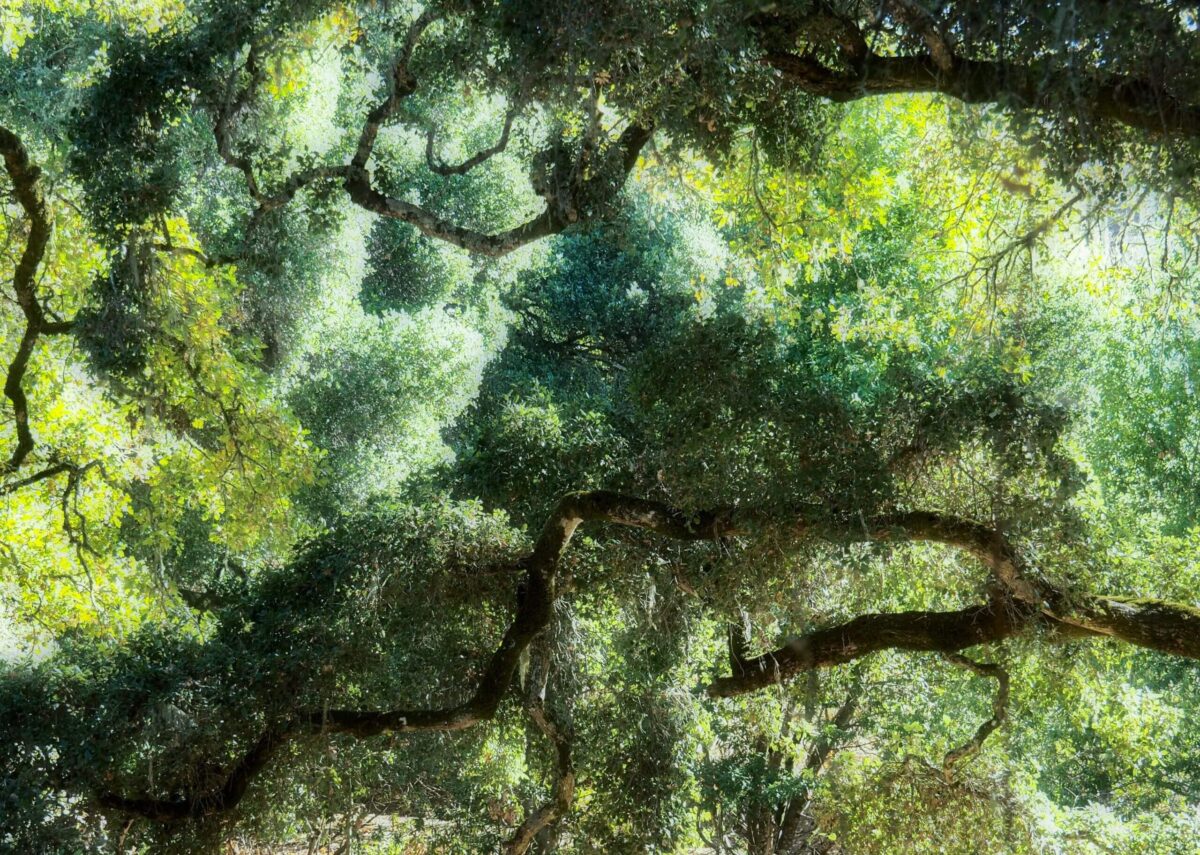 Anthony Barnosky’s phone rang out of the blue one day in 2012 when he was out running with his dog—it turned out to be
an unanticipated call from
Jerry Brown.

The former California state governor wanted to speak to the scientist about the recent paper he and his wife Elizabeth Hadly had published in Nature, alongside 20 other scientists. The paper warned that humans were pushing the global climate to a perilous environmental tipping point. Governor Brown wanted to know why scientists had not been shouting this news from the rooftops.

“And I said, ‘Well, I thought we were,’” Tony chuckles, recollecting his first interaction with the then-governor. “And he said, ‘What? No. I’m a politician, I know how to get things done and a lot of this is news to me.’”

Governor Brown went on to help Tony and Liz distribute a statement (signed by 1,400 scientists from 60 countries) summarizing the tipping point premise and potential solutions to national and world leaders. For the scientist pair, their collaboration with the Brown administration showcased the power that public outreach has to amplify scientific research.

“It made me want to do more than go out and study fossils,” reflects Tony.

Today, Tony and Liz are using their scientific and advocacy skills to lead Stanford’s Jasper Ridge Biological Preserve (JRBP), teaming up as the Preserve’s executive director and faculty director. Situated in the eastern foothills of the Santa Cruz Mountains, just five miles from Stanford’s campus, the 1,200-acre space is a hub for scientific research and teaching, a remarkable university/local community collaboration and a case study for environmental conservation.

“Jasper Ridge has a long tradition of research and teaching,” explains Liz. “Our first student project or study came out in the 1800s, but we also have a very rich legacy of community outreach.”

The pristine meadows of Jasper Ridge are steeped in ecological significance. Even before the land was designated as a biological preserve in 1973, Paul Ehrlich and Peter Raven found their famous evidence for coevolution here through their studies of butterfly-plant interactions. Hal Mooney experimented on the Preserve’s rich abundance of native plants and solidified the principles of vegetative resource allocation.

“It’s really daunting to think about the giants who have come before us,” Liz says.

While Liz and Tony do not obsess over the personal legacy they will leave at Jasper Ridge, they do constantly think about how to maximize Jasper Ridge’s potential as a living laboratory. To them, Jasper Ridge represents an ideal location to study the Anthropocene, the current geologic epoch. Unlike any period of geologic history, human impact is driving the climate and environmental changes appearing in the geologic record.

“Everywhere in the world is now being impacted by people,” Tony says. “The planet is changing so fast in so many ways driven by humans, that no longer can we just assume that we can keep managing nature the same old way that we always have. To keep nature healthy in the future, we do have to manage it, but we really have to understand how this overprint of rapid change is making the whole world different.”

Liz points to the Searsville Reservoir coring project as an example of how to use Jasper Ridge to characterize human impact on the environment. Because the Searsville Dam has blocked the flow of San Francisquito Creek since 1892, the 10 meters of sediment accumulated at the bottom of the reservoir contains evidence from nearly the entire history of human industrialization in the region. Liz explains that the cores obtained from the sediment can spark all manner of studies: analyzing environmental DNA, tracking chemical runoffs, monitoring invasive species and so much more.

“That sediment—that is amazing,” she says. Liz thinks they may eventually use the site to define the precise moment when the Anthropocene epoch began. “The detail on this core is just the most amazing core you’ve ever seen,” she adds, with near-breathless excitement. “It’s probably one of the best in the world that we know about.”

Jasper Ridge is also a part of the Santa Cruz Mountain Stewardship Network, which is a group of 22 major land stewards—from Big Creek Lumber to the Sempervirens Fund—working together to develop a regional plan to sustain the native ecosystems throughout the Peninsula.

“These are groups that have very diverse missions and are now working together,” Tony says. “It turns out there are a lot of things in common that people will get together on.”

The combination of research and outreach is what drew Liz and Tony to Jasper Ridge in the first place. Prior to Jasper Ridge, the two built their careers analyzing changing ecosystems based on the geologic records of North America’s Rocky Mountains. They noticed first-hand how the growing human population was influencing the environment, which led to public policy projects like the one prompting Jerry Brown’s phone call. Through Jasper Ridge, they saw a chance to experiment with the policy ideas they championed in a relatively small, semi-controlled space.

“The opportunity to study the environment intensely is much more tractable in our backyard than it is in Yellowstone,” Liz says. “I find a lot of parallels and a lot of power in Jasper Ridge.”

To protect vital research projects and conserve the historic land, Jasper Ridge welcomes the public through docent-led educational tours only—with an estimated 8,000 visits a year. Liz and Tony are proud of the learning opportunities Jasper Ridge provides to local schools, including free tours and teacher training workshops. Additionally, of the 60 yearly research projects in progress at Jasper Ridge, Liz estimates that half are run by faculty from other institutions.

“There are many different kinds of attractive qualities for teaching at Jasper Ridge that include more than just the fundamentals about ecology and evolution,” adds Liz. “We appeal to artists, we have writing classes, photography classes and even plays out there; we have had people from Stanford’s School of Earth and civil engineering projects.”

Beyond her work at Jasper Ridge, Liz returns to Wyoming every year to advance other research. Her studies of pack rats in a Yellowstone cave was the basis for both her master’s and PhD projects and her lab is filled with specimens from that field site.

This cave also happens to be the site where Liz first met Tony.

“I was working at the time in a cave in Colorado and she was working in this cave in Yellowstone,” recalls Tony. “We were probably two of four people in the world who were excavating ancient pack rat middens to see how the mammal communities had changed through time.”

After bonding over a shared fascination for rodent waste piles, Liz invited Tony to visit her Yellowstone cave. The two married in 1990, first taking positions at UC Berkeley, followed by work at Montana State University. The couple moved back to the Bay Area in 1998 with Liz becoming an assistant professor in the Stanford Biology department and Tony returning to a Berkeley professorship. In 2016, they joined Jasper Ridge’s leadership team together, hoping to guide JRBP’s contributions on a local, regional and global scale.

Balancing the research, community outreach and conservation elements of the Preserve is challenging—but Liz and Tony cherish the value of this protected, unspoiled space in heavily-developed Silicon Valley.

“There’s been this incredible foundation of science and teaching and outreach built here already—how do we take that to the next level?” ponders Tony. “I think all the things that we’re trying to do right now are to understand the Jasper Ridge system and use that as a way to model how we can manage nature into the future.”

After ABOUT, it’s the second button on the Jasper Ridge website: VISIT THE PRESERVE. Through the efforts of over 100 active docents, Jasper Ridge invites the community to experience the Preserve’s geologic, topographic and biotic diversity—along with some truly fabulous views. Docent-led educational tours run from October through May.

Trained to “teach on the trail” through a rigorous class taught during the academic year, JRBP docents represent a mix of Stanford students and community members. Each docent class (up to 24) is carefully curated to reflect a range of backgrounds and interests. “We don’t want the class to be all ecologists or environmental scientists,” advises Jorge Ramos, JRBP’s associate director for environmental education. “We choose students and community members who are bringing something unique—we want you to bring your creativity and express it in your own way.”

In addition to leading tours (assigned by areas of interest), docents also contribute to research projects, volunteering to help with bird surveys, wildlife camera monitoring and collecting botanical specimens. “Some of the long-term bird studies are done by volunteers who are in their 70s,” notes Liz. “So this is a really deep, long connection we have to the surrounding area.”

John Working of Palo Alto dates his involvement to the docent class of 1981. “My early interest in Jasper Ridge came as a member of Boy Scout Troop 51, which was a troop for children of professors living on campus,” John recalls. “I had some camping experience out there including…” he says, with a bemused smile, “some wonderful cases of poison oak.”

For John, becoming a Jasper Ridge docent felt like a natural fit. “I had always been a wanderer of the countryside as had my parents,” he says. “My whole family was just steeped in identifying the natural environment—trees, flowers, birds and mammals.”

As a longtime JRBP supporter and patron, John led docent tours for nearly four decades and continues to participate in Zoom meetings and updates. “Being able to talk about the special biology that is there is just a delight,” he says. “I don’t know of a place that I’ve held in higher regard than Jasper Ridge; it reaches out to the community in a way that nothing else does.”