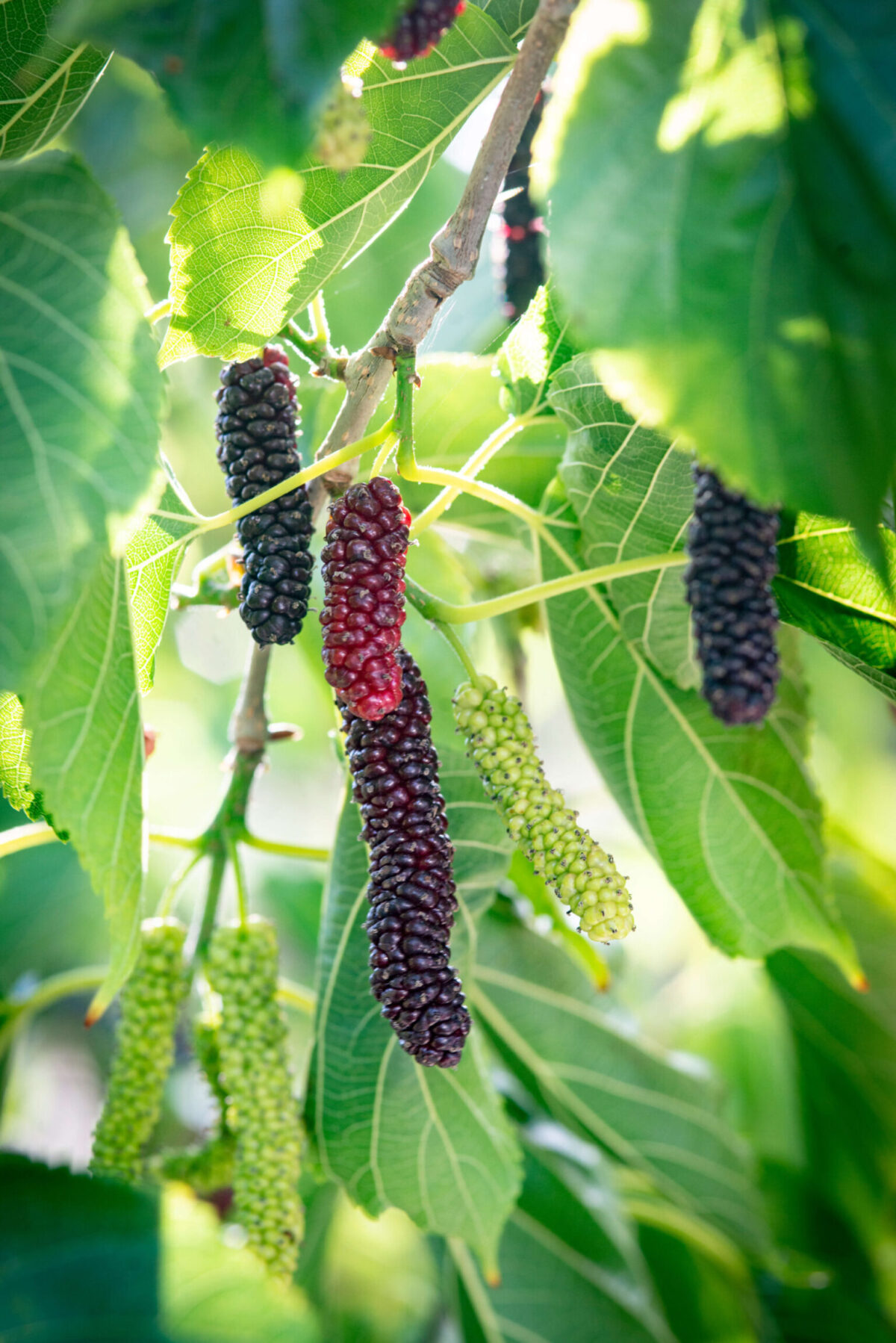 When Kevin and Monica Lynch moved into a Palo Alto midtown fixer-upper in 2003, the adventurous pair looked at the pie-shaped 8,600-square-foot parcel and saw a blank canvas. “We scraped the yard,” Kevin recalls, “and we got out a rare fruit catalog and just planted one of everything.”

And, as with all grand experiments, there was plenty of failure. “We got a loquat that never made a piece of fruit,” laments Kevin, with a clear note of exasperation. “And kiwi, we planted eight kiwi vines and built a whole trellis—and never saw one.”

Also in the mix: serviceberry, huckleberry and marionberry. And, a single mulberry tree, which they planted in their front yard. According to Kevin, the tree produced “two or three tiny little berries” that first year.

Which is all it took.

“We’d never tasted mulberries before,” clarifies Kevin, accompanied by a brain-exploding-like gesture. “Monica and I were standing next to each other and we ate half a berry each. It was like, oh my god, it’s so [expletive] good. We’ve got to get another one of these.” 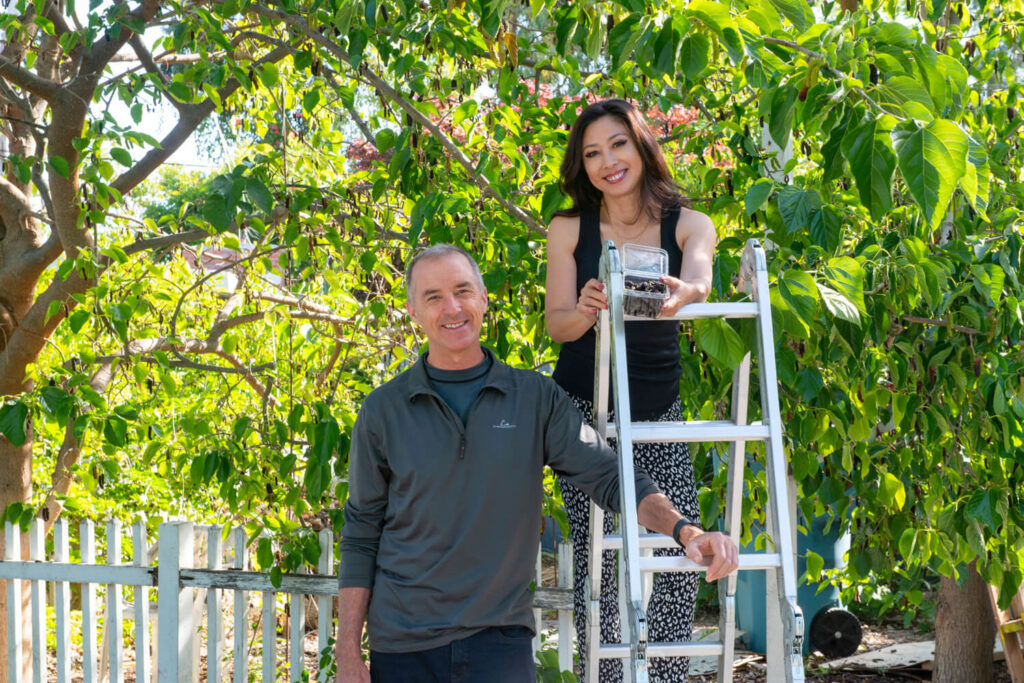 Actually, they bought three more. And while Monica had hoped to hang onto a bit of open play space for their two young sons, Osy and Halo, she indulged Kevin as he whittled away at their plot of land. “Piece by piece, I started ripping out the lawn and planting a tree in its place,” he says. Kevin gestures to a particularly dense section of the yard: “There are 15 that were planted all at once right back there.”

And while a handful of other fruit trees retained some turf, the mulberry became the officially anointed king of the Lynch garden. The current tally? Now 35 mulberry trees, 20 of which are prolific producers. “When I go in, I go all the way in,” admits Kevin, as he gently plucks a plump ripe berry off a branch.

According to Kevin, fruit-bearing mulberry trees are uncommon locally, and one look at the heavily stained ground and pavement helps illuminate the hesitancy to plant them. “They used to be a very popular tree,” he says, “but landscapers didn’t like them because they’re a godawful mess.” As a crop, mulberries are also very perishable, which makes them all but impossible to traditionally package and sell. And, then there’s the challenging matter of how mulberries ripen for harvest. 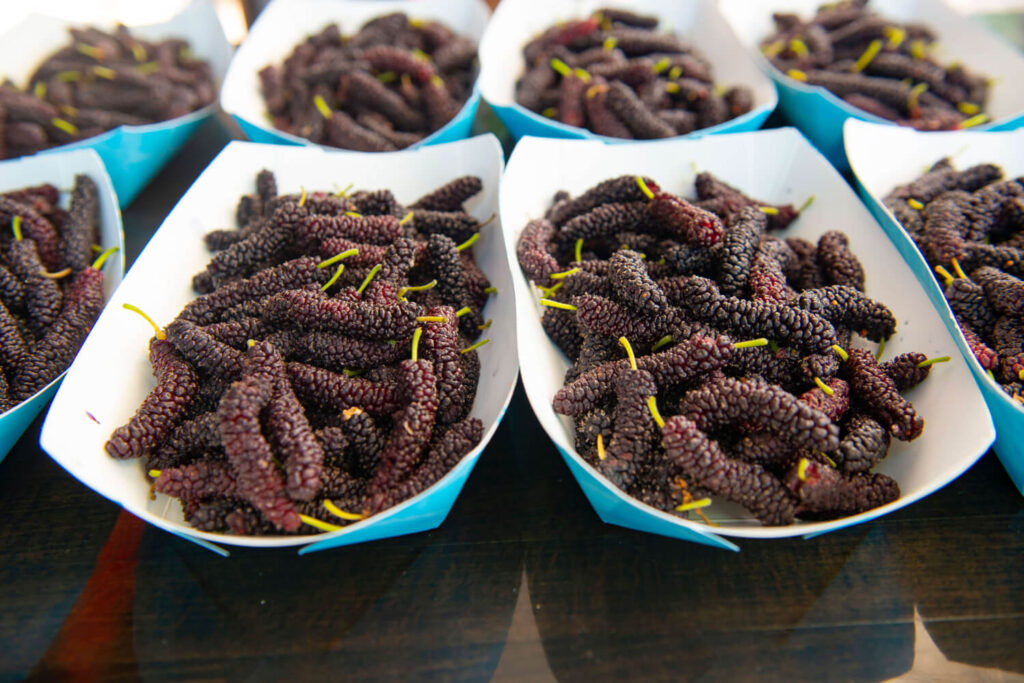 “The season is stretched out,” Kevin notes, gesturing to a multi-colored cluster on a branch. “See, there’s a ton of green fruit right there, and only one of them is black. It’s like one gets ripe and then two weeks later the next one in the cluster gets ripe and it just goes on like that from about late May to early August.”

So why would Kevin and Monica go “all in” growing this rather tricky and problematic fruit? First off, there’s that delectable taste. “Pure sweetness,” gushes Kevin. “Every one of these tastes like dessert, tastes absolutely sinful.” The other deciding factor? The mulberry’s weird ripening pattern is actually fortuitous timing for the Lynch family.

Kevin and Monica are Palo Alto teachers—Kevin teaches seventh grade biology at JLS Middle School and Monica is a second grade teacher at Ohlone School—so they both have nine weeks off every summer, which directly corresponds to peak mulberry season. “We had an accidental run-in with this tree we knew nothing about,” Kevin summarizes, “and it just turned out to be a really serendipitous experience for us.”

In the early years, Kevin and Monica gave away fruit to friends and neighbors, always prompting the same reaction: “Oh, my god, those are amazing!” Before long, they were harvesting more fruit than they could share. That inspired an inquiry to the Downtown Palo Alto Farmers Market, which jumped at the chance to bring in a local exotic fruit vendor. And it was the Farmers Market that also prompted the name of the business.

“Everyone is referred to as ‘the something’ at the market—there’s the honey guy, the apricot guy, the cheese girl,’” explains Kevin. “So I keep hearing myself being called ‘the mulberry guy,’ and I thought, ‘Why am I fighting this? I should just embrace it.’” 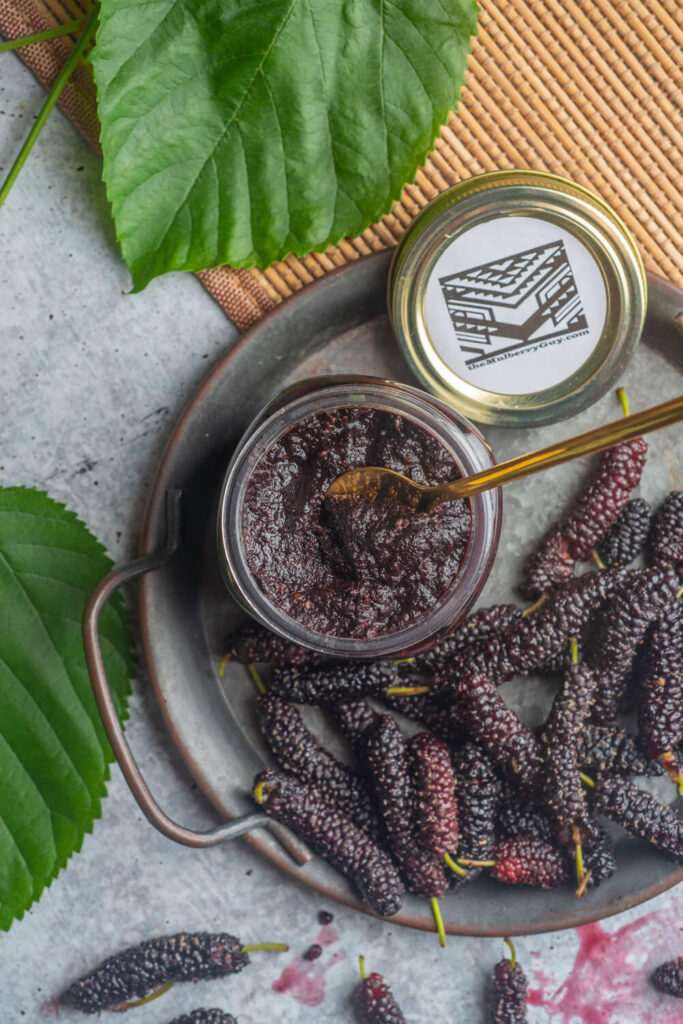 Kevin and Monica created a logo and branding and launched themulberryguy.com website. Initially focused on selling fresh mulberries, the perishable nature of the berry led them to branch out into other products. “You can’t put them on the shelf, so once you pick them, the clock is running,” observes Kevin. That urgency led to the creation and packaging of mulberry jam, mulberry honey, mulberry lip balm and mulberry tea.

A regular vendor at the Downtown Palo Alto Farmers Market, The Mulberry Guy pivoted to a more flexible direct-to-customer model to navigate the complexities of 2020—and stayed the same course through 2021. Factor in restaurant clients, which have included the likes of Madera in Menlo Park, Chez TJ  in Mountain View, Quattro at the Four Seasons Silicon Valley and even a brewery in Morgan Hill, and it’s no wonder that Kevin and Monica scramble through the summer to pick an average of 50 pounds of berries each week. “We can be out here a good three to four hours a day,” relays Kevin. “It’s a classic giraffe situation—I’m the ladder guy and then she’ll clean off everything that’s lower.”

By the end of the summer, the couple concedes that they’re happy to see the last berries ripen. They always wrap up the picking in time for a late summer family vacation, a tradition that’s even more precious with their youngest son about to start college. And while they’ve paid a price in discolored sidewalks, stained fingers and ruined carpets, the Mulberry Guy and the Mulberry Mom (as Monica is known) don’t regret going round and round countless mulberry trees. “It has defined our time,” reflects Kevin. “It contributed a little bit of money, but more importantly, it gave us a purpose every summer and a place in the fabric of Palo Alto.”