Hanging with the flamingos (and more) in Palo Alto 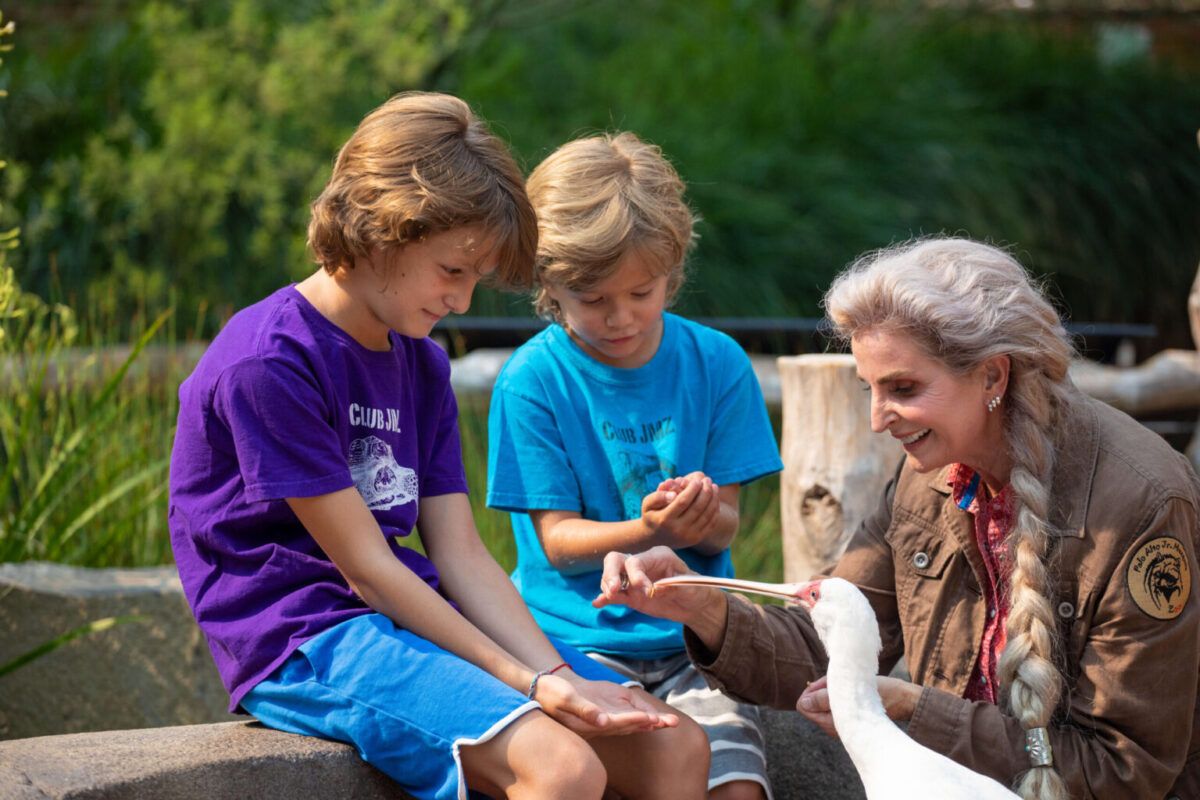 When you ask her about Edward, Lee Harper’s eyes get misty as she reflects on the tight connection they share. “Edward and I are just madly in love. We are so simpatico,” she confides.

“Could he be any more handsome?” Lee asks rhetorically, as she affectionately regards Edward’s scaly yellowish-brown skin, hard protective shell and stubby legs, while hand-feeding his darting tongue a red bell pepper chunk. “When the sun is setting and the sky turns pink,” she continues, “I take Edward out and we go on these long, romantic walks.”

That Edward happens to be a 22-year-old, 180-pound African spurred tortoise seems apropos in this magical setting that goes by the name of Palo Alto Junior Museum & Zoo (JMZ). With her braided thick golden tresses, Lee, a senior zookeeper, looks like she herself has stepped out of the pages of a fairy tale, and indeed, much like Snow White, she’s on a first-name basis with every living creature around her.

“That’s Thor,” she says, introducing us to a hamerkop perched on a railing. “He’s an architect extraordinaire.”

“And that’s Manusela,” she adds, pointing to a clearly extroverted (and screeching) white Moluccan cockatoo. “He’s our stand-up comic until our lemurs arrive.”

Tucked into a corner of Rinconada Park in Palo Alto, the fully reimagined and recently reopened attraction is home to more than 50 species—many allowed to roam freely with visitors. “We call the concept ‘Loose in the Zoo,’” explains John Aikin, JMZ’s executive director who worked his own brand of wizardry to transform the outdated facility. “What I’ve heard from people as they’re looking all around with ibises flying overhead is, ‘I feel so immersed, I feel immersed in their world,’ and I think that makes a big difference. Instead of feeling separate, they are in it.”

The Origin of the Animals

Backing up, the first question that begs to be answered is how did a zoo find its way into a residential Peninsula neighborhood? It all started with the museum, originally founded in 1934 as the first dedicated children’s museum west of the Mississippi—if not in the country. “There was a wave going on that was trying to solve the ills of urbanus by providing activities for children,” supplies John Aikin. “And so this community jumped on that bandwagon and were able to get Works Progress Administration funds to operate the museum for a while.” The museum’s previous structure opened in 1941, and the desire for animals for teaching then led to the creation of a companion zoo in the late 1960s. Per the prevailing style, the facility was built as a “typical 1960s bathtub zoo,” as John describes it. “They wanted everything to go down a drain, so the animals were put in cages and sterile environments.”

Although a beloved community fixture, the museum and zoo clearly lagged behind as needs and cultural norms shifted to embrace accessibility, natural habitats and living landscapes. A former director of conservation at San Francisco Zoo, John joined JMZ in 2008 with a mandate to take the Palo Alto facility to the next level. “It had a connection to the community like nothing I’ve ever experienced before, and I fell in love with the place,” John recalls. “When I was hired, the head of community services and the city manager both looked at me and said, ‘This place needs to be rebuilt, it needs to be accredited and it’s got to be funded by the private sector and you’re the guy to do it.’”

When the Palo Alto Junior Museum & Zoo reopened on November 12, 2021, it marked the culmination of an exhaustive community initiative that took more than a decade. Ultimately designed by CAW Architects in Palo Alto and s

pread across three acres, the $33 million project nearly doubled the facility’s footprint—made possible by $25 million in funding raised by Friends of the Palo Alto Junior Museum & Zoo and another $8 million contributed by the City of Palo Alto. At 15,200 square feet, the main museum building features interactive exhibits that invite exploration of natural phenomena like gravity, motion, force, electricity and balance. “What the exhibit designers try to do is to get kids to use all of their senses,” John explains. “Kids learn more when their curiosity is engaged.”

From the indoor exhibit space, a vibrant passage, designed as an homage to the great zoo gates of Europe, beckons visitors to step outside. Under a lofty outdoor netted enclosure lies the 18,800-square-foot aviary-style zoo, with eight distinctive exhibit areas: Big Treehouse, Meerkat Canyon, Raccoon Creek, Underwater Tunnel, What Lives in that Hole, Rabbit Meadow, Tortoise Hill, Macaw Tree, Water Bird Pond and Wildlife Circle. That first element, the Big Treehouse, effectively ties the space together through a sprawling, whimsical network of ladders, rope bridges, crawling tubes and viewing platforms. “It’s about kids relating to the animals, having empathy for the animals, trying to understand them from their point of view,” John relays. “What we’re trying to do is help them frame questions up here. What does it take to be a canopy animal? You have to be brave, you have to be able to grasp, you’ve got to be able to climb, you’ve got to balance. And so they’re doing all of that up here.”

As for the facility’s central theme, what exactly does it mean to be “Loose in the Zoo?” With the exception of a few species, the birds and animals—whether they’re pet and wildlife rescues or brought in from accredited zoos—move about freely. Walking down a pathway, you’ll see fulvous whistling ducks tucked in for an afternoon nap near the water’s edge, nod to a brilliantly-plumaged peacock in passing and look skyward at the sound of scarlet ibises soaring immediately overhead.

Which, um, triggers another question: Isn’t there a risk factor walking under all these birds? John is quick to provide reassurance. “As a person who has taken care of birds and worked with birds all his life, I know about bird poop—when they poop, how they poop and where they poop,” he says. “Most birds won’t poop when they’re flying, so there are actually only a few birds that do poop on people.”

With that in mind, John strategically positioned the zoo’s tree branches away from pathways to ensure safe passage for visitors and staff below. “This place is so perfectly orchestrated,” confirms longtime zookeeper Lee Harper. “I have never ever been pooped on, nor have I ever seen any guests get pooped on.”

Come and Get It!

One of nature’s other basic instincts—the need to eat—helps foster an even closer connection between the wild and human species here. In the exhibit area known as Wildlife Circle, through a progressive series of sounds, zookeepers formally announce meal time and make it an interactive experience. “Wildlife Circle is the place that we have trained all the birds to come for food,” John explains. “They’re each trained to a different percussion instrument so we can call them in by species.”

The meerkats wait for the bell. For Thor, the hamerkop, it’s a click, click, click. Violet, the African spoonbill, responds to a honk, and Apu, the peacock, starts salivating at the reverberation of cymbals. Beyond the visual spectacle, it’s an intimate educational opportunity, as visitors who volunteer to help at feeding time quickly discover. “Flamingos are filter feeders, so they use pumping action,” observes John. “When you’re feeding them, you can feel them using their tongues to pump water through their bill systems.”

When an African spoonbill is gently nibbling a piece of tasty fish out of your palm, it’s easy to romanticize the role of a zookeeper, but Lee thinks it’s important to provide a realistic perspective. Originally starting as a volunteer (she estimates 4,000 hours), Lee chased her passion when transitioning into a part-time zookeeping role 11 years ago. “Zookeeping is not for the faint of heart,” she discloses. “To the public, it looks like you get to be Dr. Doolittle, but there’s a lot involved behind the scenes.” Preparing meals. Cleaning enclosures. Landscaping. Repairing exhibits. Monitoring animal health. Demonstrations. “You’re always hustling,” she says. “It is heavy-duty, hard, hard, work.”

That being said, Lee never tires of the staff’s camaraderie and the countless inspirational moments that punctuate each day—heightened by the facility’s commitment to being the most accessible zoo possible. She continues to volunteer in her off-hours and relishes the magic that happens after the doors close each night. “Even though you’d think I would take it for granted, every time I enter, I feel transported. The guests have left, the sun is setting, the moon is rising and all the animals are out,” she describes. “There are flamingos walking around, and I become so emotional because it feels like I’m in a dream. I’ll take Edward out, and we’ll go watch the fish together. It’s exactly like Night at the Museum—it does have that magic.”

All in the Neighborhood

When JMZ reopened in late 2021 after two years of construction, John admits to holding his breath—wondering if the vision they worked tirelessly toward would fully be realized. He recalls the relief he felt after leading Dick Peery, one of the zoo’s major donors, on a walk through the “Loose in the Zoo” exhibit experience: “At the end of the tour, he said, ‘John, I’ve seen flamingos before but I have never seen flamingos before.’ When they look you in the eye, it really changes the way you think about flamingos.”

For Lee, witnessing and helping foster the multi-generational engagement with this landmark facility is especially rewarding. “Not only have people grown up in the zoo, their kids have grown up here and now, they’re bringing their grandkids and great-grandkids,” she says. Lee also emphasizes that when it comes to visiting the zoo, inclusivity extends to everyone—regardless of age. “With older adults, it could be very simple to say, ‘Oh, feeding the flamingos is only for children,’ but that’s not what’s happening,” she smiles. “We’re a children’s museum and a neighborhood zoo.”