Although spring doesn’t officially begin until March 20, already there are signs: new buds in bloom, longer days and the increasing appearance of a certain neighborhood bagpiper. That’s right, bagpiper. His name is Ken Sutherland and he doesn’t have a set schedule, but if the weather’s good and inspiration strikes, you might be lucky enough to catch him.

A lifelong piper—Ken likes to say he’s been “playing the bagpipes since before the first moon landing”—he’s been practicing in and around his Menlo Park home for years. The pandemic only served to ramp up his productivity, as locals who knew of his talent urged him to join the global movement of musicians sharing their passion out-of-doors. Friends and neighbors of all ages now regularly gather for his impromptu performances.

“When a musician comes out and plays for other people, it’s really appreciated and loved,” notes Ken. “It’s a reminder to the neighborhood that we’re all connected. I’m just offering up something that I hope people are going to enjoy.” In turn, Ken is grateful for the kindness of his neighbors’ emails and words of appreciation. “It’s this great combination of the neighbors enjoying it and something to look forward to,” he says. “When you do something routinely that is enjoyable, you want to keep doing it, and so I found that I was playing nearly every day.”

Ken acknowledges that it takes a certain personality and confidence to play bagpipes in public. “You probably have to be a slight bit crazy,” he admits. “I don’t know of many shy bagpipers. When you’re going to play an instrument that you can hear a mile away, you have to be comfortable with being somewhat the center of attention.”

And Ken has rightfully earned his place in the spotlight: his prowess on the pipes is no accident.

With a desire to pass on the musical tradition of his Scottish heritage, Ken’s father, Jack Sutherland, was one of three members of the City of San Francisco Caledonian Pipe Band who recognized that without an organized local effort to train young pipers and drummers, this unique cultural art could eventually die out. So, in 1967, they assembled a small group of young pipers and drummers and started recruiting students—and Ken was a natural to tap. A year later, the Band was officially incorporated as a nonprofit educational organization, the Prince Charles Junior Pipe Band, with young Ken firmly in the fold.

Currently Ken serves as Pipe Major of the Prince Charles Pipe Band (PCPB), a San Francisco-based group but with members throughout the region. Its mission is to teach youth and promote excellence in the art of Scottish bagpiping and drumming. The band competes in the U.S., Canada and Scotland and earned World Championship titles in 2000 and 2003. The current Senior Band has been the Western United States Pipe Band Association Champion for eight of the past ten years.

Ken is also lead piping instructor for the PCPB Junior Band with 12 students ages 10 to 17 now under his tutelage on the bagpipes. A different teacher instructs the drums. Ken’s goal with teaching is to “promote excellence,” he says, “in the way you play, your musicianship and the music that you put out. It’s a very demanding instrument, it’s very hard to play. We try to promote that higher level and encourage people.” And while Ken encourages achievement to the highest level possible, he notes that, “Even if you’re not the best technical player, the band will fit you in. We’re promoting a sense of family, we’re all looking out for each other.”

Born in San Francisco and raised in Marin, Ken met his wife, Sue, in the Prince Charles Pipe Band when they were both teenagers. They’ve lived in Menlo Park for 32 years, where they raised two now-adult children, John and Kathryn. The couple was gratified to see John carry on the Scottish woodwind family tradition, and John’s six-year-old daughter Avery recently declared that she wants to learn the pipes too.

Even with his long history on the instrument, Ken put his playing on hold for 15 years due to work and family commitments. He picked it up again in 1998 and started competing, crediting his wife for lighting the fire. She challenged Ken and John to get practicing and enter a competition, with the first to win named family champion. They both took up the gauntlet, and Ken won on a technicality by one day. Today, the thrill of competing keeps Ken going, which requires practice and discipline.

“I’ve always told people that in order to get into bagpipe shape, you just have to play the bagpipes,” he says. “When you get to be my age as a musician, you’ve got to keep it up or else you’ll lose it because physically the pipes are so demanding.” Ken explains that the handheld instrument weighs about ten pounds and the reeds require a considerable amount of pressure. “I know people who are incredibly fit, aerobic workouts and all that sort of stuff, who would not be able to play,” he asserts. “They’d get winded.”

Ken says the popularity of playing bagpipes for ceremonial purposes arose from the influx of Scottish and Irish immigrants to the U.S., many of whom became police officers and firefighters and brought the piping tradition with them to their jobs. The bagpipes we typically see in ceremonies and events are of Scottish origin, even the ones played in St. Patrick’s Day parades. The national pipe of Ireland, the uilleann pipe, requires the player to be seated, so it’s believed that the portability of the Scottish pipes literally carried the day as the more commonly-used instrument.

You don’t have to be Celtic (or even Ken’s neighbor) to appreciate Scottish culture. In the Bay Area, the city of Pleasanton annually plays host to the Caledonian Club of San Francisco Gathering and Games, one of the biggest competitions in North America. In a typical year, tens of thousands of people gather on Labor Day Weekend for the big event.

According to Ken, competitions keep both the culture alive and the bagpipers in line. “If three pipers get together,” he quips, “two will compete, one will judge and then there will likely be a fight over the outcome.” As for Ken, you’ll know when he’s playing—even from a mile away—whether he’s performing with the Prince Charles Pipe Band or in the Felton Gables neighborhood of Menlo Park. 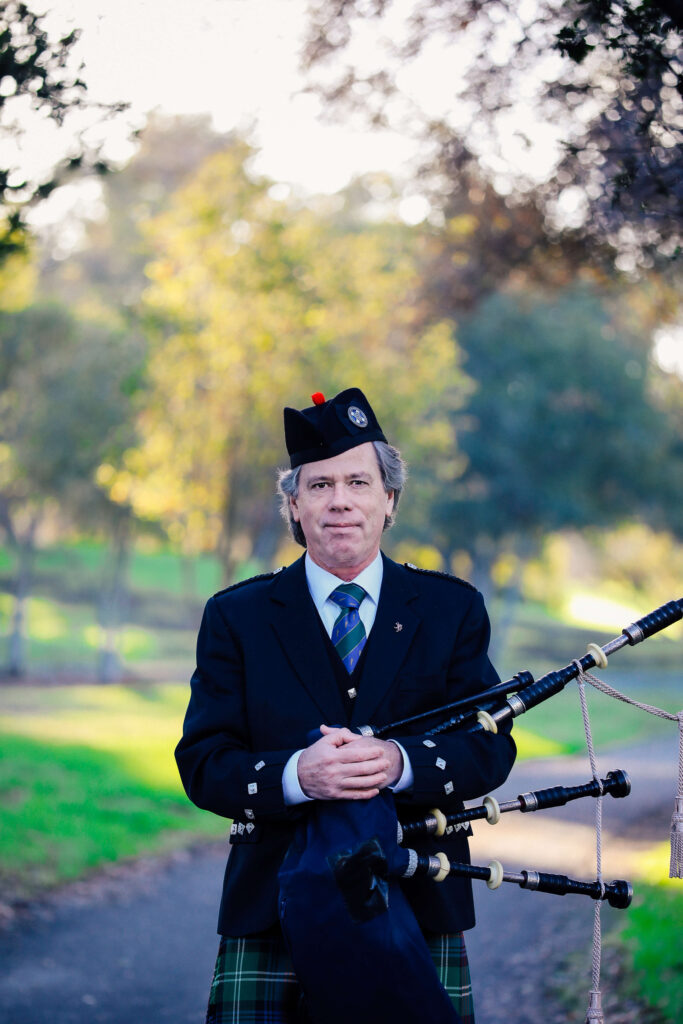