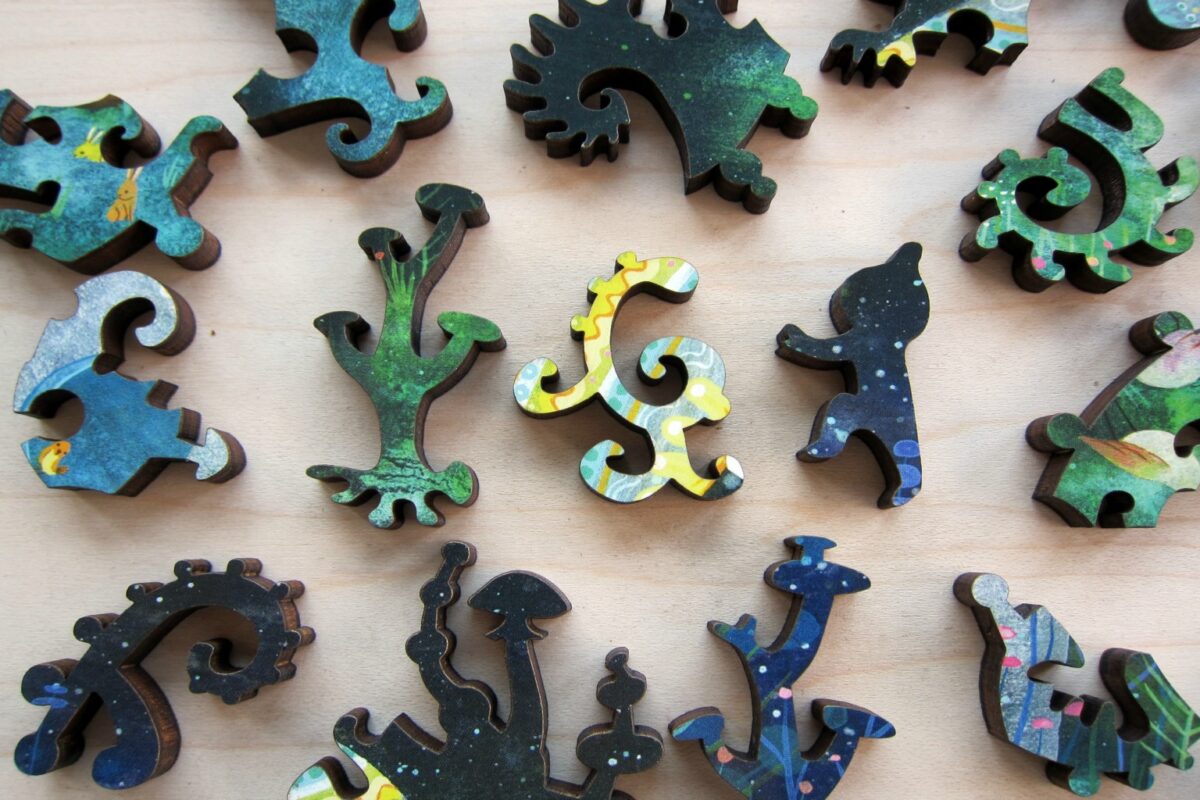 Erin Hanson’s 2016 painting “Crystal Grove” is reimagined as a 367-piece wooden jigsaw puzzle. Admiring the image from afar, it’s a work of beauty. Swirls of purple and blue coalesce to reflect a small forest grove washed by the light of dawn. In a way, it’s the daytime counterpoint to Vincent van Gogh’s “The Starry Night.”

But the beast is revealed the closer you peer into the puzzle, and it’s easy to see why this is the most difficult jigsaw puzzle in the entire Artifact Puzzles catalogue.

The puzzle’s edge is comprised of pointed, ninja star-shaped pieces that rebuff the traditional design of your perpendicular, childhood jigsaw puzzle. The middle consists of several pieces called “whimsies” that are shaped like recognizable objects to correlate with the image; mini owls, dragonflies and butterflies cut with precision from a laser complement the scenery of a blissful copse. It’s 367 pieces of colorful swirls connected by brushstrokes. To complete this puzzle is no small feat.

“I can tell you it’s the hardest puzzle I have not completed,” Maya Gupta says. And she’s the founder and CEO of Artifact Puzzles. “I probably spent eight hours doing it and only got 30 pieces!”

“Crystal Grove” is one of about 300 designs developed thus far by Artifact Puzzles, an independent and artisanal puzzle company. Founded in Seattle in 2009, the puzzle manufacturer relocated to Menlo Park in 2014 and set up shop near Facebook’s headquarters. Now marking its ten-year anniversary, the company is preparing to relocate to a larger commercial building in the spring, signaling positive growth for a boutique business that promotes a timeless pensive pastime. While working as an associate professor of electrical engineering at the University of Washington, Maya conceived Artifact Puzzles to expand the borders of traditional jigsaw puzzle making. Envisioning puzzles with better images connected by a satisfying challenge, she began creating puzzles with the help of a friend. As demand grew, so did the company. Artifact Puzzles is now a ten-person operation with a reputation for innovation. Although its puzzles are found in a few local toy stores and museum gift shops, Maya explains that it doesn’t pay to use a brick-and-mortar method of distribution, so they’re almost exclusively sold through Amazon.

The puzzles are made from laser-cut, 1/4”-thick, formaldehyde-free maple plywood sourced from a distributor in Oregon. “It took me five years to get that wood,” Maya says. “I have to get custom-made wood that cuts efficiently and doesn’t have knots that need ironing out.” And the process of laser cutting remains a mystery: “Manufacturing secrets!” she jokes.

A puzzle begins with the selection of an image. Maya started by sourcing fair use art created before 1923 and currently in the public domain. She seeks bright colors, sharp lines, an interesting story or “something that will look good when you spread it on a table,” she says. “Because not everything looks good when you cut it into pieces.”

Classical artwork such as “The Fall of the Rebel Angels” by Pieter Bruegel the Elder and “The Hunt of the Unicorn” have been made into puzzles but the company loves to showcase contemporary artists including Erin Hanson and Bruce Riley, whose “Stem Cell” puzzle is the company’s current top seller. Bay Area artists include Sausalito-based Daniel Merriam and San Francisco’s “robot painter extraordinaire” Eric Joyner.

Fans of Artifact Puzzles often submit requests for new puzzle designs, and Maya says they rely heavily on customer input; sometimes they’ll issue a survey with several images for fans to choose from to create the next design. Puzzles will range from about 60 to close to 600 pieces and typically cost between $25 to $120. Thinking back to her childhood, Maya recalls deriving a sense of satisfaction from completing puzzles. This love of problem-solving is a continuous echo in her career. She earned both an MS and PhD in electrical engineering from Stanford University before teaching at the University of Washington. She returned to the Peninsula in 2014 on a sabbatical to research with Google. She now leads the Glassbox Machine Learning R&D team at Google, a program that is teaching machines how to be better at learning.

Ten years into her pet puzzle project, which has garnered national appreciation and fanfare, Maya admits it’s been a labor of unanticipated longevity. “We thought we’d run out of ideas after 30 puzzles, but we just keep coming up with new ideas for how to make puzzles cool,” she says.