Hours before any self-respecting rooster would think to crow on a Saturday morning, the alarm goes off at Full Belly Farm in Guinda, California. Farm co-owner Dru Rivers has the routine nailed down: up at 2:45AM and on the road by 3AM in a 16-foot box truck loaded with six- to eight-thousand pounds of produce. Factoring in a CSA farm box delivery along the way, it’s a 2.5-hour drive from Yolo County’s Capay Valley to downtown Palo Alto.

Arriving on Gilman Street between Hamilton Avenue and Forest Avenue by 6AM, the Full Belly crew launches into action, popping up canopies and wooden tables, along with tackling the really big job of unloading. “It’s quite a workout,” Dru remarks, as she stacks up a colorful mix of winter squash in red-draped display boxes. “With five other people, it takes us two hours to set up and make it look really pretty.”

Over those same two hours, about 50 other vendors follow their own familiar drills to set up shop—from prepared (Indian to Oaxacan to Jewish deli) foods in an adjacent Gilman Street parking lot stretching across Gilman through fresh baked goods, meat cuts and locally-caught fish to a second lot packed with diverse stalls touting lavender oils, organic jams and teas and every type of produce imaginable.

Volunteers in green aprons walk past “No Thru Traffic” and “Road Closed” signs to set up  eye-catching street banners. Edging towards 8AM, customers toting recyclable bags begin to converge, patiently waiting, mentally ticking off shopping lists in their heads. “Ding, Ding, Ding!” At 8AM, with the sounding of the opening bell, the Downtown Palo Alto Farmers Market springs to life—in a tradition dating back nearly 40 years.

Back in the early ’80s, Palo Alto faced a shocking new reality. Liddicoat’s, the last local grocery selling fresh produce, had moved out, effectively rendering downtown Palo Alto a food desert. A group of local citizens, many of them affiliated with the Avenidas Senior Center, convened to find a solution. “‘Well, we can’t have this,’ they said,” is how Eva Heninwolf recounts the story. “‘We have to do something about this!’”

What they did was create the Downtown Palo Alto Farmers Market. Supported by an all-volunteer board, using outdoor space donated by the local branch of Wells Fargo Bank, 11 farmers showed up on June 27, 1981. Overwhelmed by the huge turnout of customers clamoring for leafy greens and fresh fruit, the farmers sold out quickly. “Back then, there were only maybe three farmers markets on the entire Peninsula,” Eva says. “We drew from Los Gatos all the way up to San Francisco.”

The need was clear—and over the years, the Downtown Palo Alto Farmers Market grew and evolved. In 1982, the market made its first annual charitable donation to Avenidas, followed by a move to its current location on Gilman Street in 1983 and incorporation as a social welfare organization in 1986. Still run by an all-volunteer board today, the market remains true to its mission, with cumulative donations to Avenidas now totaling over $600,000.

“The fact that we’re volunteer, the fact that we donate all of our proceeds right back to the community, that makes us very different from a lot of the other farmers markets around,” Eva says, speaking from the perspective of a market volunteer since 2000. This year, the former software engineering manager and three-time past president is wearing the VP hat. Bob McDiarmid, a marketing web engineer, is taking a turn in the top spot. “I was a longtime customer and I saw on their website that they were looking for marketing help, so I signed up, and here I am,” Bob says. “It’s a very passionate group of people. We’re here because we care about food and we care about the community.” 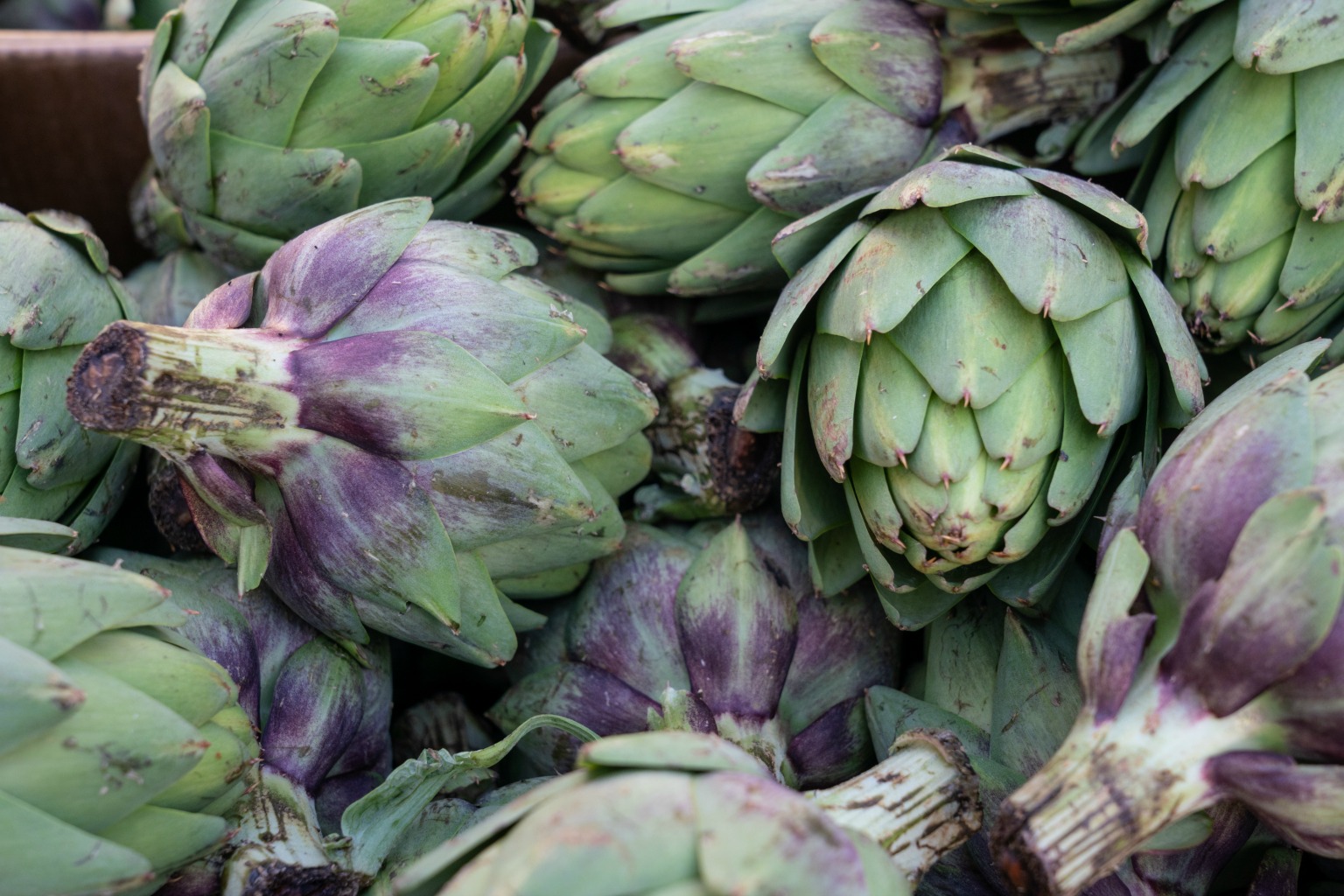 The board usually ranges from 12 to 16 volunteers, all committing to a minimum of eight hours a month (“It can be a lot more than that,” Eva notes.) with tasks ranging from market shifts and publicity to financials, crafting market policy and community outreach. Retired insurance claims adjustor Lee Carlson traces his involvement back to 1992. “I grew up on a farm, so I relate to the farmers,” he says. “It’s kind of strange to be a farm guy in Palo Alto. There aren’t too many.”

Along with market manager Yvonne Portra, the board aspires to keep Downtown Palo Alto flourishing, especially as competition from other markets heats up. To that end, in 2020, the market will record another major milestone. Traditionally running May to December, Downtown Palo Alto will start serving the community year-round. “We’re hardly the only game in town,” Bob says. “We’re trying to widen our audience and going year-round is a big part of that because consistency is the key.”

When asked how vendors are selected, Bob explains, “Curation is the word we like to use. Big markets can afford to have four people selling all kinds of apples, right? We try to pick vendors who are going to bring a unique product, so if they have apples, we say, ‘What apples do you have that our other vendors don’t provide?’ We really try to curate a sense that this is the only place you’re going to get this quality product.”

“We have people who make special trips down from San Francisco for mulberries,” Eva chimes in. “They say, ‘Where are the mulberries? We’ve heard about the mulberries.’” Bob nods in agreement, adding, “We even have a rockstar vegan pastry vendor with vegan pastries that will knock your socks off. I don’t know how she does it.”

“Once we have a vendor come in, we want that vendor to be successful,” Lee summarizes. “We’ve had vendors who have been here since day one.”

With walnut and apricot orchards located an hour away in Hollister, Gibson Farms is one of those vendors. “Our parents first came when the market opened in 1981,” says Gilbert Gibson, who maintains the unbroken tradition with his sister, Ginger Lobeck. “When their health declined, Ginger and I were asked to step in, and since we both had other jobs, Saturdays were doable for us.”

Listening with half an ear, Ginger hands back change, completing the sale of a half-pound slab of dried apricots. “These have become my go-to gifts,” her customer pipes in, as she runs off  to drop her daughter at cross-country practice. Ginger waves a quick goodbye. “A lot of these customers knew my parents and have been coming to us for years,” she says. “Relationships get built over time and that’s part of the reason we still come here.”

With a blazing selection of freshly-cut dahlias, hydrangeas and sunflowers set up in Gilman Street, Contreras Nursery & Flowers is another original vendor dating back to 1981. “We’ve been at this market since we opened,” Jesus Contreras says, referring to his family-run business based in Moss Beach. “I know most of the customers. They give me a hug and ask how I’m doing.” Nearby, his daughter Mayra is bundling up bouquets with some advice. “For the dahlias, put a teaspoon of sugar in the water,” she counsels. “For the hydrageanas, now we have a new trick. Cut the stem at an angle and add hot water in the vase.”

Mayra glances over at her niece and daughter who have tagged along for the day, triggering memories of her own. “I have a full-time job during the week, so I help my dad out on the weekends. I’m so used to coming to this market,” she says. “I remember coming with my parents and knowing everyone. I’m 42 years old and people are always saying, ‘I remember when you were this little.’” 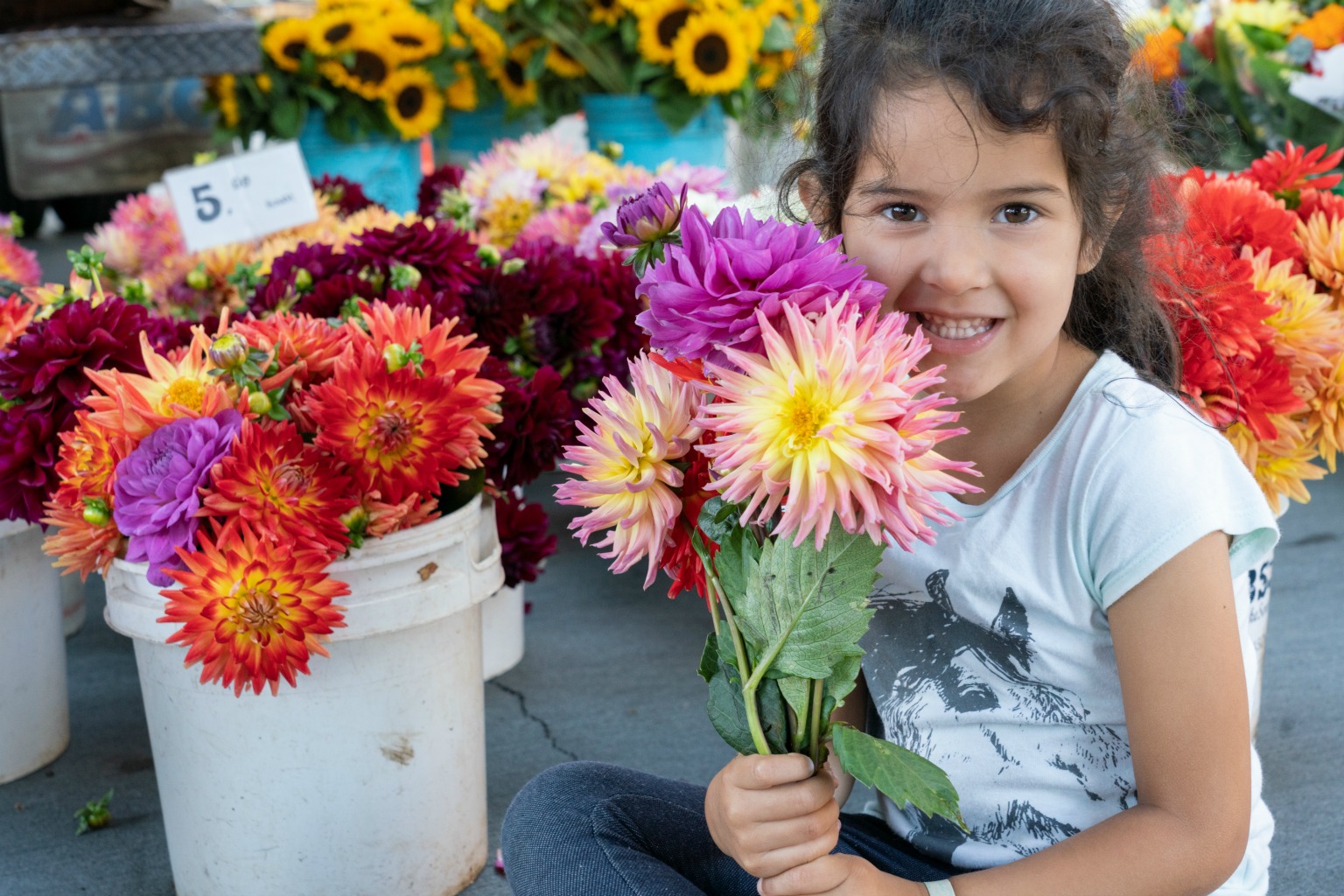 A few stalls away, Karin Johnson, the proprietor of Karin Johnson Specialty Cakes & Pastries, is packaging up a selection of freshly-baked cookies: two Pecan Macaroons, three Brown Sugar Shortbreads and three Cowboy Cookies—a yummy oatmeal chocolate chip concoction with dried cherries. Working out of her Castro Valley bakery, assisted by a small staff that includes her mother, Sherry Johnson, Karin juggles the demands of three farmers markets every weekend. “Friday is our big day to start baking—we’ll put in 10 to 12 hours. We have an overnight baker and then I’m in by 4AM to finish the baking,” she says. “We leave the bakery at 7AM, zip over to the market, unload, sell for four hours and then go back and get ready for Sunday.” Karin started coming to Downtown Palo Alto in 2009. “I really like the Saturday market because of the size. To be able to hang out with all these amazing people every week makes all the hard work worth it,” she reflects, as she gently bags up an apple galette and orange zest scone.

While polling foot traffic isn’t precise, Eva estimates that the 8AM to Noon Saturday market draws 800 to 1,200 customers on any given weekend. Carolyn Helmke counts herself as one of the regulars—she’s been shopping here since 2002. “You see so many friendly people, there’s music. It’s just a really nice scene,” she notes. What’s filling up Carolyn’s reusable market bag? “Apples, arugula, tomatoes, flowers, bread,” she reveals. “I love the new bread vendor. Oh, and I get fresh eggs from Full Belly.” When it comes to buying fresh, quality food, Carolyn acknowledges that she is not particularly price-sensitive. “If it didn’t taste good, I wouldn’t be shopping here. And I like to support the farmers. I like that there’s no middle person.”

That lack of a middle person was clearly evident on a recent weekend when board members hosted their annual luncheon for the vendors—laying out a smorgasbord of favorite home-cooked dishes and breaking bread shoulder to shoulder after the market day wrapped up. “It’s beyond the normal relationship that many farmers market boards have with their vendors,” Bob observes. “These people are our friends as well as our clients. The relationships we build are just irreplaceable.”

Nearly 40 years after the market’s opening, the food desert of Palo Alto is now an oasis—with Whole Foods just blocks away and more than two-dozen seasonal and year-round farmers markets regularly setting up stalls in San Mateo County alone. The all-volunteer board knows the shift to a year-round schedule is the right move, even as it effectively doubles the board’s commitment. “We’re all doing it because we love the market,” Eva emphasizes, as she contemplates the ramp-up ahead. “Our mission is to directly connect our farmers and our food artisans with the community.”

By noon, the market buzz turns to packing up and closing down, with vendors setting aside unsold produce for donation to St. Anthony’s Padua Dining Room. Over at Full Belly Farm’s stall, Dru is reversing the early-morning drill, knowing it’ll be 6PM before the farm’s 16-foot box truck pulls up in Guinda. “It’s a long day,” she admits, reflecting back on years and years of Saturdays. “We used to bring our five-month-old baby to the market, and now he’s 35. I still come every week, and I just feel like it’s become a second home. We see kids of our original customers buying from us, so it’s fun to see that progression to the next generation.”