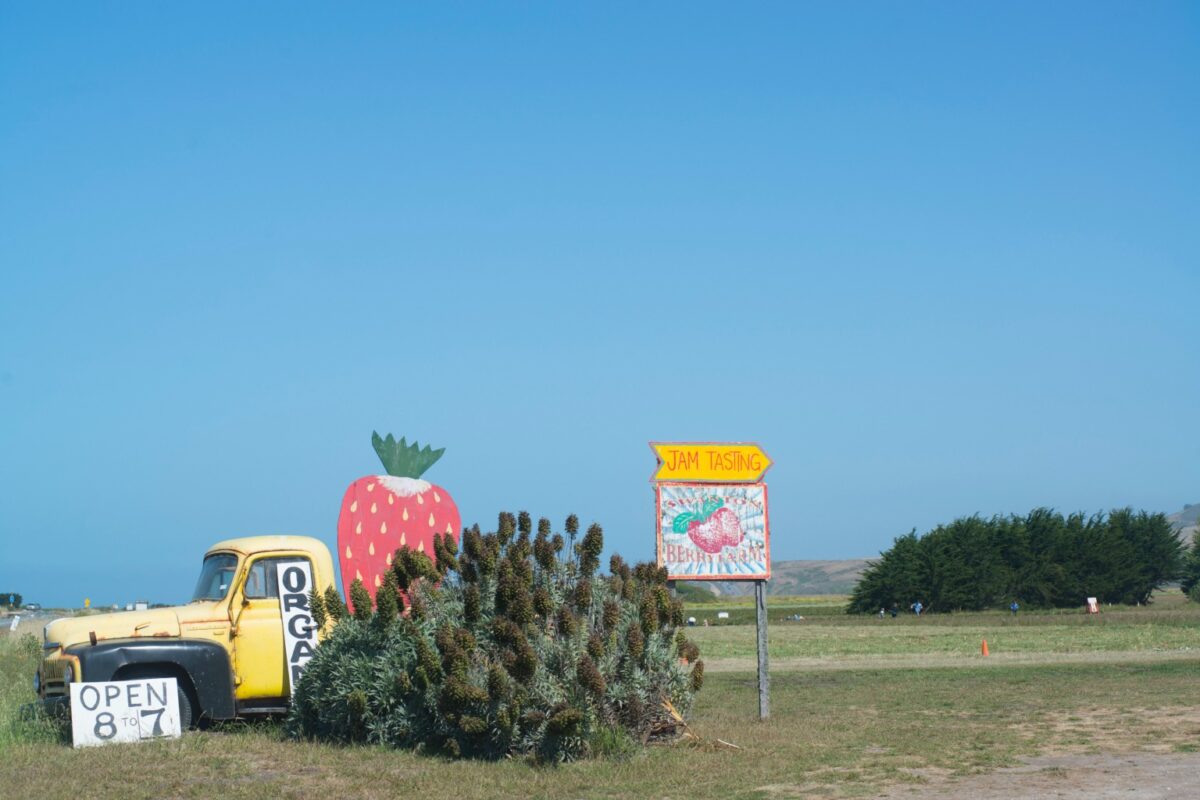 Usually when there is a public, picturesque oceanfront area, the masses have discovered it and it becomes a “destination,” crowded with people and trendy storefronts. But the Slow Coast is still largely a hidden gem. You may not even have heard the term. The Slow Coast, lesser known than its popular and more southern oceanside neighbor, Santa Cruz, is the special area on the stretch of land between Half Moon Bay and Santa Cruz. It combines the beauty of the California coast line with a rich history not found in all parts of the West Coast.

From hiking to biking, berry picking to tidepooling, the Slow Coast will have something for you. We’ve rounded up the best parts of this gorgeous region, so hurry up to slow down on this getaway.

Wilder Ranch State Park is a California State Park on the Pacific Ocean coast north of Santa Cruz. Because of the nature of the trails at Wilder, it’s a favorite for mountain bikers, but however you navigate it, you’ll be treated to sweeping ocean views peppered with some great pocket beaches. And attention history buffs: The park was formerly a dairy ranch, and many of the ranch buildings have been restored for use as a museum that contains early farm implements and tools. Docents at Wilder Ranch often dress in period clothing for interpretive tours and living history demonstrations; check the website for details. Just north of Santa Cruz, the park is open every day from 8 AM to sunset, and the visitor center is open from 10 AM to 4 PM, Wednesday through Sunday. 813.423.9703, parks.ca.gov

The popular Roadhouse Restaurant & Inn exists in the historic location of the original Davenport Cash Store, which was built in 1906. In 1953, the Cash Store was destroyed in a fire and remained a charred wreck until 1978, when it was briefly a pottery studio and then became the restaurant in 1982. In 2006, the Cash Store came under new ownership as the Davenport Roadhouse Restaurant & Inn. Like most restaurants right in Davenport or Bonny Doon, the Roadhouse is pretty casual. If you’re craving a fancier dining experience, you’ll want to head into downtown Santa Cruz. 1 Davenport Ave, 831.426.8801, davenportroadhouse.com

Whale City Bakery is known for their famous ham and cheese croissants, but if you miss breakfast time, go in late for tacos, a cold beer and live music (on Thursday nights). The bakery opens every day at 6:30 AM, and closes at 8 PM on every night but Thursday. 490 Highway One, 831.423.9009, whalecitybakery.com

Since the collapse of the commercial abalone fishing industry in the 1990s, you may not have heard much about this fascinating aquaculture species, but the American Abalone Farm in Davenport is bringing it back and in a very environmentally friendly way. They use pumps to continuously supply clean, fresh seawater to the abalone tanks and the shellfish are fed a natural diet consisting of a variety of fresh local seaweeds that the company harvests themselves. At the beachside location, you can shop, buy fresh seafood, learn about delicious recipes and more. The farm is open from 10 AM to 4 PM on weekends; learn more at americanabalone.com Bonny Doon Beach is a stunning beach set against the dramatic backdrop of both sand dunes and high cliff walls. It is located at the intersection of the Highway 1 and Bonny Doon Road north of Santa Cruz and near the town of Davenport. When the tide is low enough, you may see people “tide-pooling,” walking in the shallow tide pools that form near the shore when the tide goes out. These shallow pools of seawater contain countless little critters to inspect and enjoy. The beach is closed between sunset and 8 AM.

Año Nuevo State Park is restricted year-round. And for good reason: it’s home to elephant seals. Lots of them! The park offers docent-guided walks between December 15 and March 31, which feature these marine mammals in their natural habitat. To view the elephant seals during this season, you must be on a guided walk. Elephant seal viewing requires a three-to-four-mile moderate hike over varied terrain, including sand dunes. The walks last about two and a half hours and operate daily from early morning to mid-afternoon. The only time that the park is completely closed is in the beginning of December, when pregnant females and adult males begin to arrive on the beaches and form harems. The Park is open from 8:30 AM to sunset daily; find more information about how to reserve a spot on a tour at parks.ca.gov

Pigeon Point Lighthouse stands high (115 feet!) on a cliff. This landmark has been guiding mariners since 1872. The coastal areas surrounding Pigeon Point Lighthouse are rich with life—both flora and fauna. The intertidal zone along this part of the coast, particularly in the rocky reefs that flank the light station, contains a diverse and sizeable variety of plant and animal life. If you do go for a visit, leave your dog and your drones (if you have one) at home. Neither is allowed. 210 Pigeon Point Road, call 650.879.2120 to schedule a guided history walk. We could really make a whole list on Costanoa alone. It’s a resort full of accommodations from rugged cabins to more traditional hotel rooms, with activities ranging from biking to horseback riding, a day spa and sauna, plus lots of outdoor seating and eating, so you can challenge yourself to a strenuous hike or brisk swim, and then pamper yourself by getting a massage. But for all these activities, Costanoa has above all developed a reputation as the go-to for “glamping.” Their safari tent “bungalows” are outfitted with electricity and WiFi, as well as full-size plush beds and bedding. 650.879.1100, costanoa.com

Swanton Berry Farm is a must on your getaway to the Slow Coast. You’ll see the large strawberry from the road. What you can’t see is the sustainable goal of providing flavorful strawberries that were not grown at the expense of farmworkers’ health or dignity. Over the years, Swanton has become an industry leader in developing organic methods for growing strawberries. You’ll want to pick up a pie to bring back to a friend or loved one who couldn’t join on your getaway. And just a little farther up the road, Swanton U-Pick allows you to gather the berries yourself! Find hours for the farmstand and U-Pick operation at swantonberryfarm.com.

Big Basin Redwoods State Park contains almost all of the Waddell Creek Watershed, which was formed by the seismic uplift of its rim and the erosion of its center by the many streams in its bowl-shaped depression. Animal lovers will definitely want to make a stop at Big Basin. The park has a large number of waterfalls and animals ranging from bobcats to woodpeckers and everything in between. There are far too many hikes on the Slow Coast to list them all, but Skyline-to-Sea is one not to be missed. Locals are big fans of the “Skyline to Sea” overnight. It starts at the end of Big Basin (Skyline) and ends at the sea, where you’ll get to a spot very popular for wind and kite surfing. Visit parks.ca.gov for information about parking and hours. No list of Slow Coast locales would be complete without the Slow Coast Airstream Store. The 1954 Airstream-turned-lifestyle boutique has become something of an area staple. You can spot this roadside stop on your way back from the Bonny Doon Winery tasting room along Highway 1. With surf shack vibes, the vintage trailer is surrounded by gardens and stocked with goods produced by local artisans. Fun fact: this place’s co-owner is Wallace Nichols, who wrote the fascinating and informative book Blue Mind. The book details the beneficial effects of the ocean on our brains and well-being. 450 Highway 1, open daily (weather permitting!) from 11 AM to 5 PM.