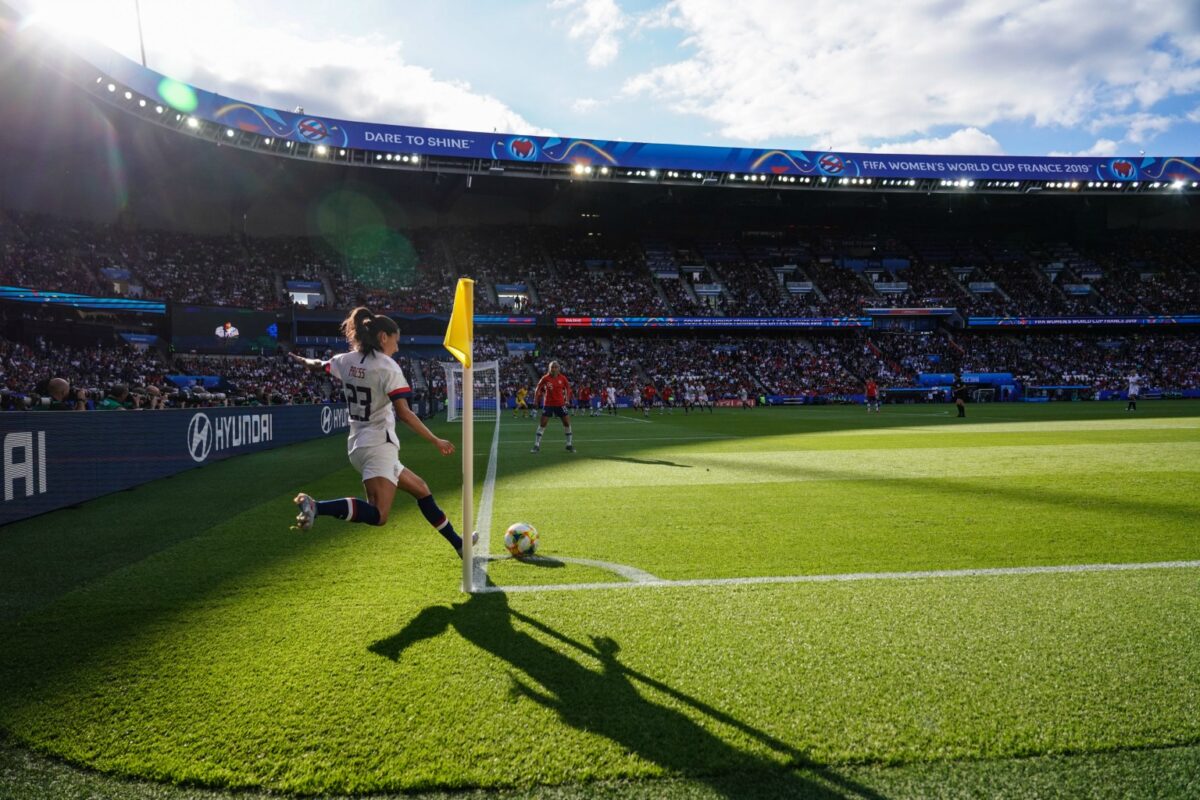 John Todd arrives four hours before the 2019 FIFA Women’s World Cup quarter-final between France and the United States. After putting his name on a list, he secures a match ticket, which lets him onto the pitch at Parc des Princes in Paris. Adrenaline already surging, he quickly scouts for position. “It’s really nerve-wracking deciding where do I sit on the field,” he says. “The spot you pick determines which images you’re going to get, and the good spots are really coveted. You have to pick one spot and then you can’t move for the rest of the game.”

In a crowd of 100 world-class photographers, wedged in shoulder to shoulder, John gears up to take his shot. And another. And another. And another. Constrained to a space the size of a collapsible stadium chair, wielding two cameras and a foot pedal to trigger a third remote camera set up behind the goal, John will put his stamina, quick reflexes and creative eye fully to the test.

“It’s hot and you’re sweating. It’s almost like it’s a sport in itself because you’re competing against all these other photographers trying to get the best picture,” John says. “You’re really trying to make the best image possible, so you’re also competing with yourself every time you go out and photograph.”

As a former Gunn High School football player, wrestler and diver, John knows what it’s like to compete. He applied that same mentality to the sport of photography and made a fortuitous discovery: He’s a natural athlete.

John will be the first to tell you that where he ended up is not where he ever expected to be. Growing up in Palo Alto, he took photography courses at Gunn High School—and found an outlet for personal expression and creativity. Since he was also a three-sport athlete, covering sports for the school newspaper might have seemed like an obvious fit. When John was approached, he didn’t hesitate with his answer: “I said, ‘No! I don’t want to do that stuff. I’m a fine art photographer.’” Looking back on that moment now, John reflects, “It’s ironic that I ended up specializing in sports photography because I thought it was…” John pauses to get it right, “…silly, that’s the word I used.”

After high school, John headed back east to St. Lawrence University. Although he majored in history and couldn’t access the school’s photography courses, he continued to self-train, learning everything he could on his own. A big turning point came when a St. Lawrence graduate returned to campus to show a slideshow of his work for the Patagonia catalog. As John took in the stunning action and adventure photography, he experienced a newfound appreciation. “Sitting there in the crowd, I thought, ‘That’s what I want to do!’” Inspired to shift his focus, John began to contribute sports photography to the St. Lawrence student newspaper. “It was just something that felt very natural and I kept gravitating towards it.”

After graduation, John secured his first job interview with the Cape Cod Times, laying out his portfolio for the photo editor. “All of our new hires are coming out of photojournalism school,” the editor informed him, after reviewing his images. “You’re still in the sunset and silhouette stage. I think you should consider another line of work.” 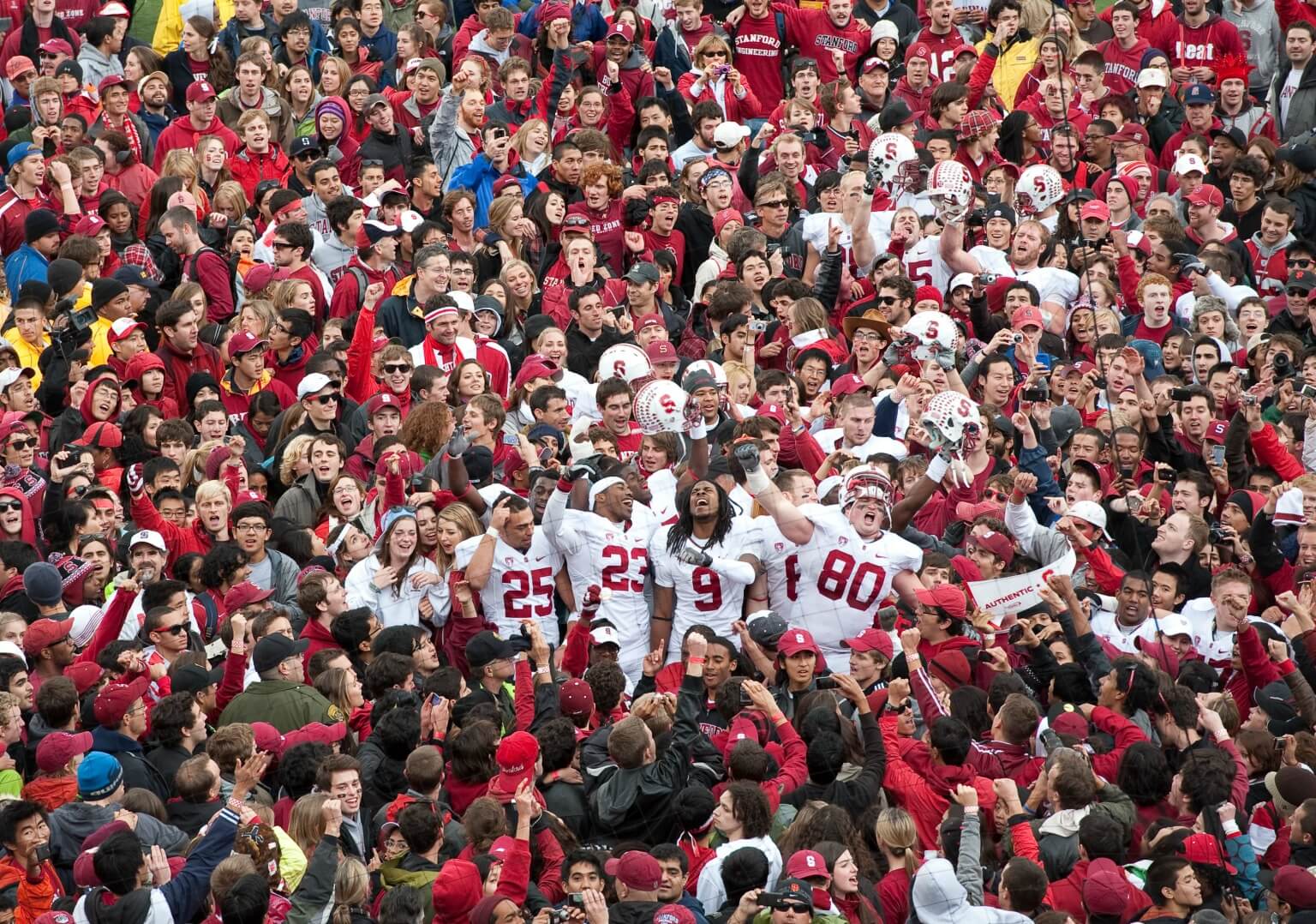 “Crushed! Crushed!” is how John describes his reaction. “I went out to the car and cried.”

However, John didn’t give up. He answered an ad for a sports photographer in Connecticut and got the job. And two years after hearing that potentially soul-crushing feedback, John found himself accepting a sports photography award for New England small newspapers. “The presenting sponsor was the Cape Cod Times,” he recalls, with a clearly-smug smile. “I didn’t see the sports editor there but it was just so gratifying to go up and get that award.”

John moved back to Palo Alto in the early ’90s and started freelancing for the Palo Alto Weekly and the Palo Alto Daily News. And then came his really big break. Local Associated Press photographer Paul Sakuma spotted his work and opened the door for John to become an AP stringer. “The editors in New York were really, really tough and you had to deliver,” John says. “It trained me to narrow down to what is important about an event, what is critical to get and the idea that there are no excuses at a photo shoot.”

Another life-altering event happened in that same timeframe. John met Annette Shelby, a Stanford grad (and tennis player) from Amarillo, Texas, who shared an equal passion for sports. Keep in mind, John was still in the throes of his “If I really knew how hard it was going to be, I might have taken a different route” struggling-to-make-it years. “He postponed our first date because he didn’t…” Annette starts to say, “…have enough money to take her out,” John finishes, adding, “I only told her that years later.”

The couple married in 1996, after simultaneously launching into another love affair—with soccer. Working for a sports PR firm, Annette caught soccer fever while supporting 1994 World Cup games played at Stanford. And when the San Jose Clash started up after the World Cup, John got a job with the new Major League Soccer team, while continuing to freelance for other clients.

Through all of his experiences, John began to process and better understand his affinity for sports photography. “It has all the elements of life in it,” he says. “It has determination, victory, defeat—and you have that all in one two-hour sporting event. It displays all of life’s emotions.”

How do you capture that with a camera? John credits San Jose Mercury News staff photographer Nhat Meyer with helping him frame his philosophy. “When you go to an event, you want to look at it as a globe. You’re trying to give somebody else who’s not there the best perspective of that game. You want to photograph on top, on the bottom, go inside, go outside and circle all the way around,” John explains. “You’re trying to tell a global story about that match.”

And how do you know if you got it right? One word, according to John. “Emotion. If you can evoke emotion in your photos and get a reader’s response, then you’re successful,” he says. 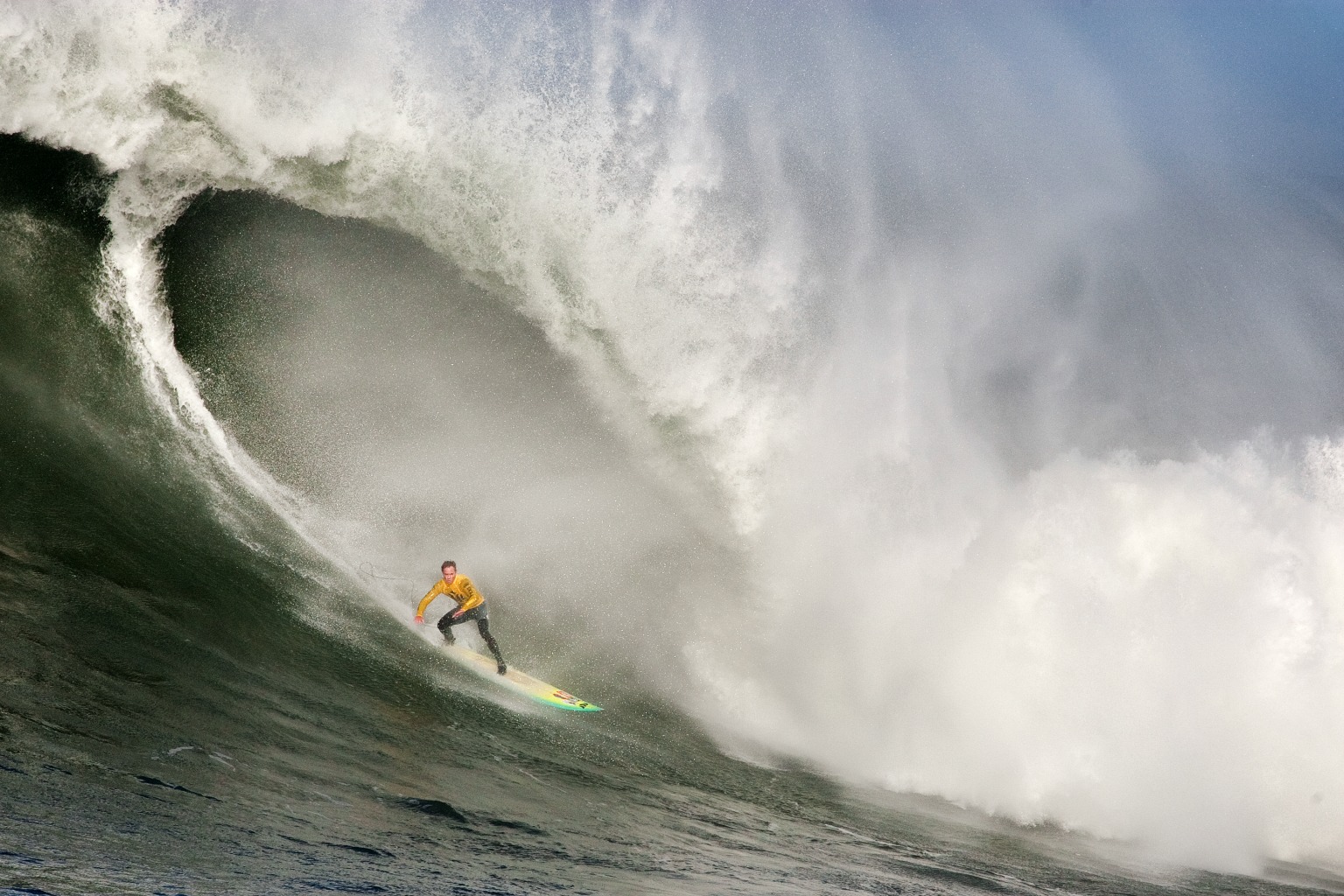 The early 2000s delivered more big developments for the couple— including the birth of their daughter, Emma, and the chance for John to shoot the 2002 FIFA World Cup in South Korea. “Two months before the World Cup, I got a call saying, ‘Hey John, I can’t go to the World Cup. Do you want to go for me?,’” John recounts. The offer came from J. Brett Whitesell, U.S. Soccer’s team photographer and the owner of International Sport Images (ISI). John had done a bit of coverage for Whitesell previously, but this was a next-level opportunity. “It was crazy at the time because Annette was pregnant. I went to South Korea on my own and spent 21 days bopping around the country. I got my first real taste of international travel and international soccer, and I was hooked.”

Whitesell approached John and Annette about buying ISI—essentially, a physical and negative archive of high-end soccer images and client relationships. “No, we’re having a child,” John and Annette initially responded, but in 2003, motivated by their shared love of soccer and sports, they reconsidered, saying, “Hey, let’s do this. Let’s go for it!” And while they describe the move as “going out on a limb,” the two recognized the unique opportunity to be both life and business partners—with John providing the “pretty images” and Annette (having added a Stanford MBA to her credentials) “making the business run.”

And run it did—perhaps, even setting records. The two started out by creating an online searchable database for ISIphotos.com, tackling the cumbersome task of converting ISI’s original 50,000 images into a digital format—a database that has now grown to one million searchable images. Aligned with the Clash-renamed San Jose Earthquakes since the franchise’s start, ISI also works with high-profile clients including the U.S. Men’s and Women’s Soccer teams, the National Women’s Soccer League, Stanford Athletics and the former Mavericks Big Wave surfing contest. With ISI images appearing in publications ranging from Sports Illustrated, Times Magazine and USA Today to The New York Times and The Washington Post, the company also licenses photos to clients like AT&T, Coca-Cola, Nike and Volkswagen. And when the National Soccer Hall of Fame reopened at Toyota Stadium in Frisco, Texas, the museum used 1,000 ISI images to create its displays and exhibits.

The job more than appeases John’s appetite for international sports and travel; he’s now a long-time veteran at staking out his spot—whether it’s a national championship, the World Cup or an Olympic gold medal at stake. “The World Cup is incredible,” John reflects. “But the Olympics definitely have that special, almost mystical feel. You’re part of an event that traces all the way back to ancient Greece.” For John, photographing the Olympics also taps a very personal chord—his mother Anne Cribbs was part of the gold medal swimming relay team at the 1960 Rome Olympics. “I think having that influence of always trying to strive for the best, trying to be your best in sport and in everything else, definitely rubbed off on me,” he says.

Relying on a team of part-time editors and coordinators and a pool of about 50 photographers, John and Annette are determined to stay ahead of the competition. Migrating physical images to an online database was the initial tech hurdle; now it’s getting images out in real time. “That’s been our edge for the last few years,” John notes. “We’re shooting all the action live. We transfer right to our iPad or phone and then straight to the cloud. Our editor grabs the images, cleans them up in Photoshop, writes captions and puts them online for our clients.”

Like an athlete, John continually trains to perfect his performance. “The demand for immediacy has definitely brought the intensity up a notch. You’re really taking it to the next level,” he says. “That’s where you get the adrenaline—trying to tell that story in real time. That’s our goal now: telling that global story every single second that it happens.”

After a lengthy turn on a wait list, ISI marked another big win this year—securing office space at Allied Arts Guild in Menlo Park. John and Annette especially appreciate the complex’s European-style architecture and direct tie to famed nature and landscape photographer Ansel Adams. “He had one of the original studios here and was the photographer of record for Allied Arts,” shares John. “He was really my inspiration for photography.”

John channels that inspiration into a side pursuit—continuing to find expression in fine art photography. “My cup wouldn’t be totally full with just sports photography,” he admits. “I still have that passion from high school that made me want to be an art photographer.” 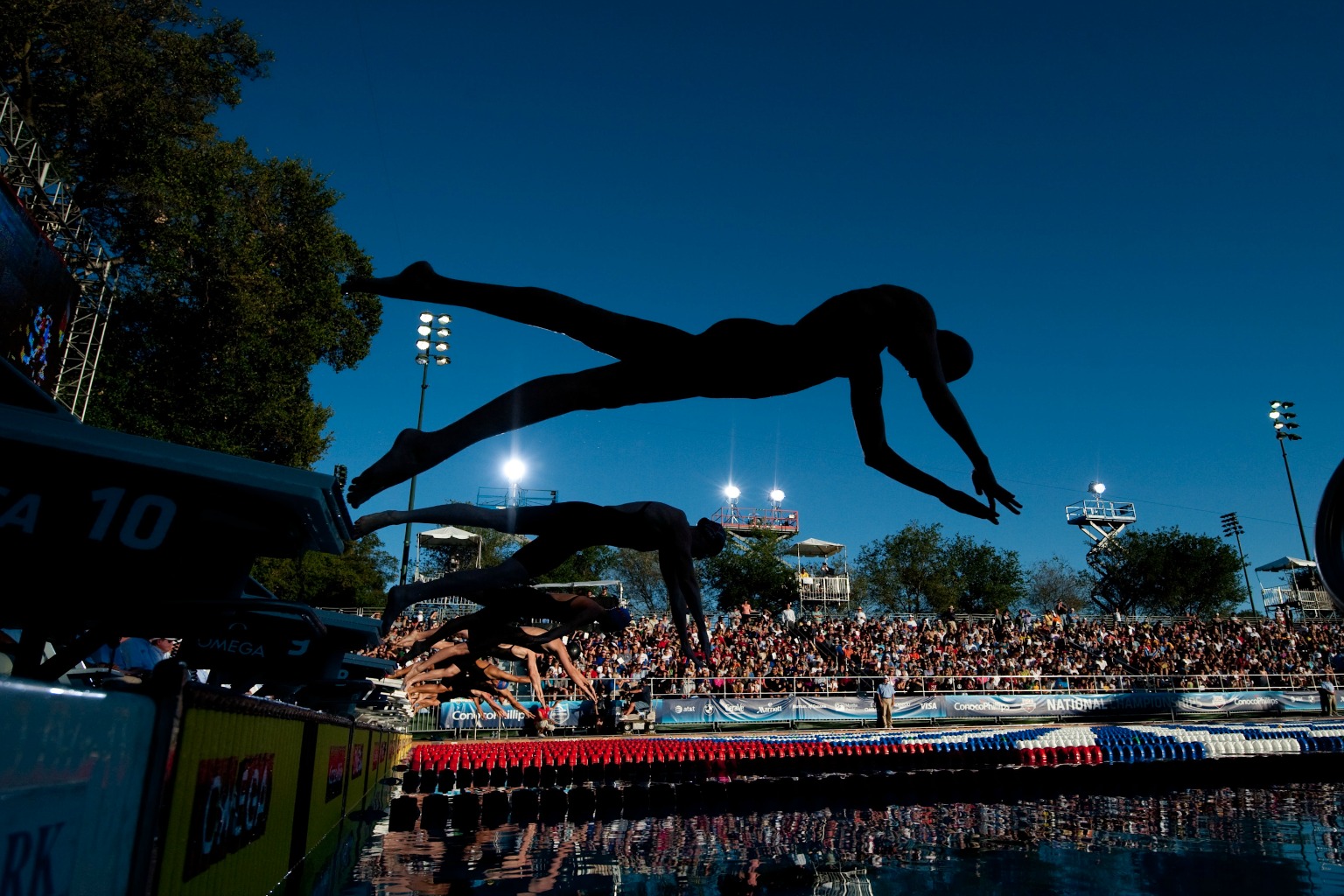 In addition to displaying his fine art work locally and at johntodd.com, John also shares his expertise (both fine art and sports photography) by regularly teaching courses through Stanford’s Continuing Studies program. It all adds up to a very full plate for John, Annette and now-Paly High School junior, Emma. “We have our turfs,” Annette notes. “Even though we work together and we are home together, we have separate strengths and skill sets, which makes it fun.”

+ Isolate your subject and look for clean backgrounds.

+ Shoot from a low position to make the athletes superheroes.

+ Action/reaction. Remember to look for the shots after or away from the action. “Jube” (jubilation) makes some of the greatest shots.

+ Shoot backlit. If the light is flat, change your position to
shoot backlit into the sun.