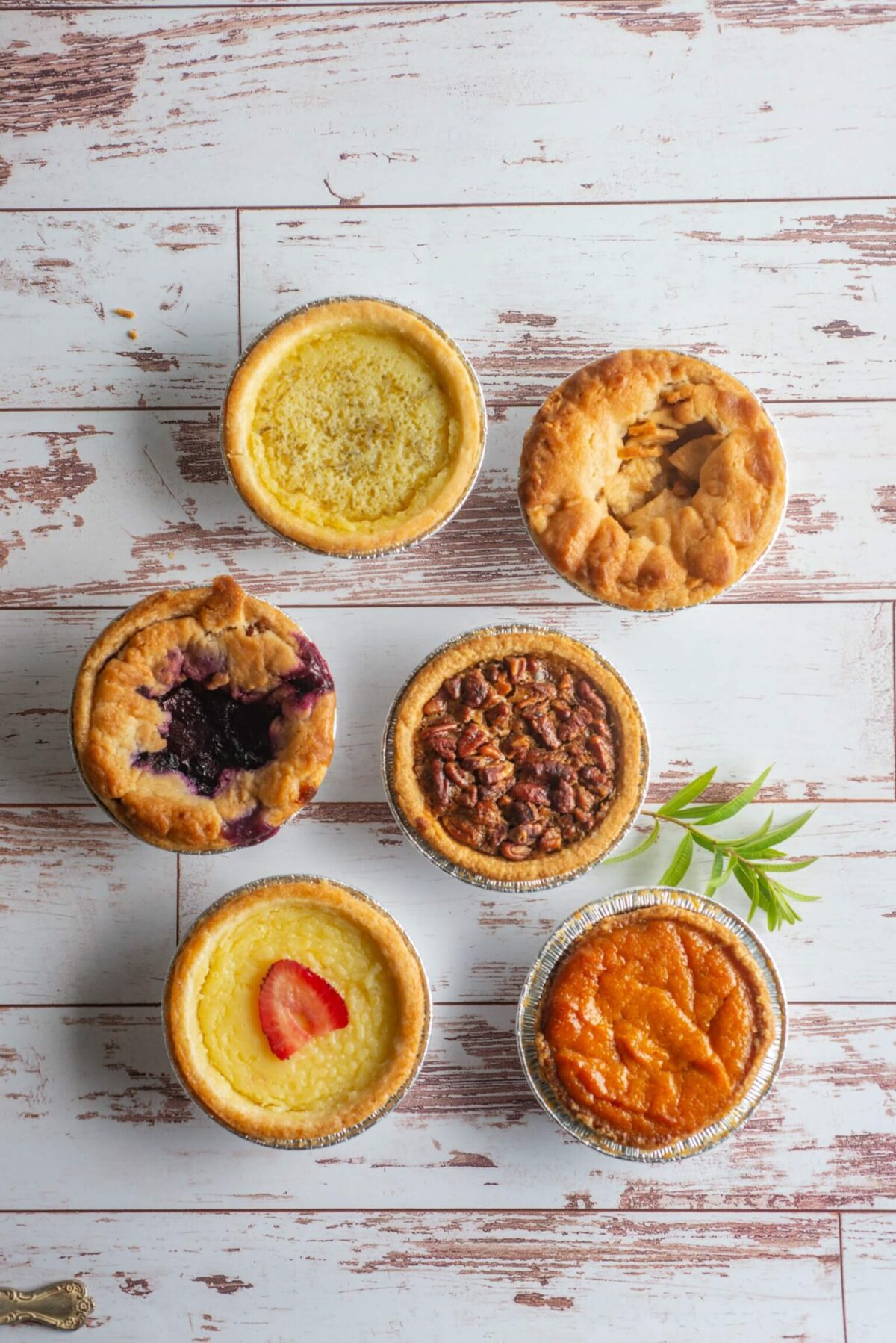 The KitchenAid Spiralizer makes quick work of prepping a crate of apples. The appliance spins a green apple, peeling away the fruit’s skin in corkscrew fashion, revealing juicy white insides while simultaneously slicing the apple into rounds. Apple pieces begin to fill up two food storage pails, already far along in the journey to becoming pie filling.

Pacifica-based Shampa’s Pies, located one block from the ever-churning ocean, opened in 2014. Balmy sea spray and the scent of seaweed hangs in the air. Waves pound against the boulder-constructed seawall at the end of the street, emitting a rushing roar on impact. The constant busy whirring of machines inside the pie shop mimics the motion of the nearby ocean.

Pastry chef Haruwn Wesley’s willingness to try new things led to his mastery of both making mouthwatering pies and boogie boarding over ocean waves. An unusually hot day at Stinson Beach coupled with progressive curiosity prodded Haruwn to move from the safety of shore to tackling big waves in Hawaii on a foam core bodyboard. “When I first saw these guys out in the water, I thought they were nuts, not knowing what priceless joy and beauty it is being out there,” Haruwn recalls.

Life’s current also carried Haruwn to his professional calling. The San Francisco native’s visit to see his girlfriend in New York City turned into an unofficial ten-year education in the food industry. “I stumbled into the culinary world,” Haruwn says. Starting out washing dishes, he worked his way up to sous-chef, where he ran the cooking line at restaurants. Disenchanted with preparing meat, Haruwn’s interest in baking began to take shape.

Assisting an Irish soda bread maker, rolling out dough for Danishes and attending a pastry workshop readied Haruwn to become a pastry chef at Manhattan’s 21 Club. The executive pastry chef of the upscale former speakeasy expected Haruwn to be a quick study, only showing him how to do something once. “I had to get it, and I did,” he says. Upon his return to San Francisco, Haruwn dabbled in other fields, becoming a longshoreman, electronics technician and Unix analyst. “I missed the Zen moments of baking,” he says.

Haruwn’s late mother-in-law Sheridan Coles encouraged him to start his own baking business. Her family nickname, “Shampa,” a combination of “Sheridan” and “gramps,” became the name of his pie shop. “I decided to specialize in pies because it’s a beautiful thing,” he says, while waking up some chilled pumpkin filling with a 12-inch wire whisk. “A lot of people think the deep-fried bar at McDonald’s is a pie. Or pies from the frozen section at your local grocery store. Those aren’t fresh pies. Fresh is better.” 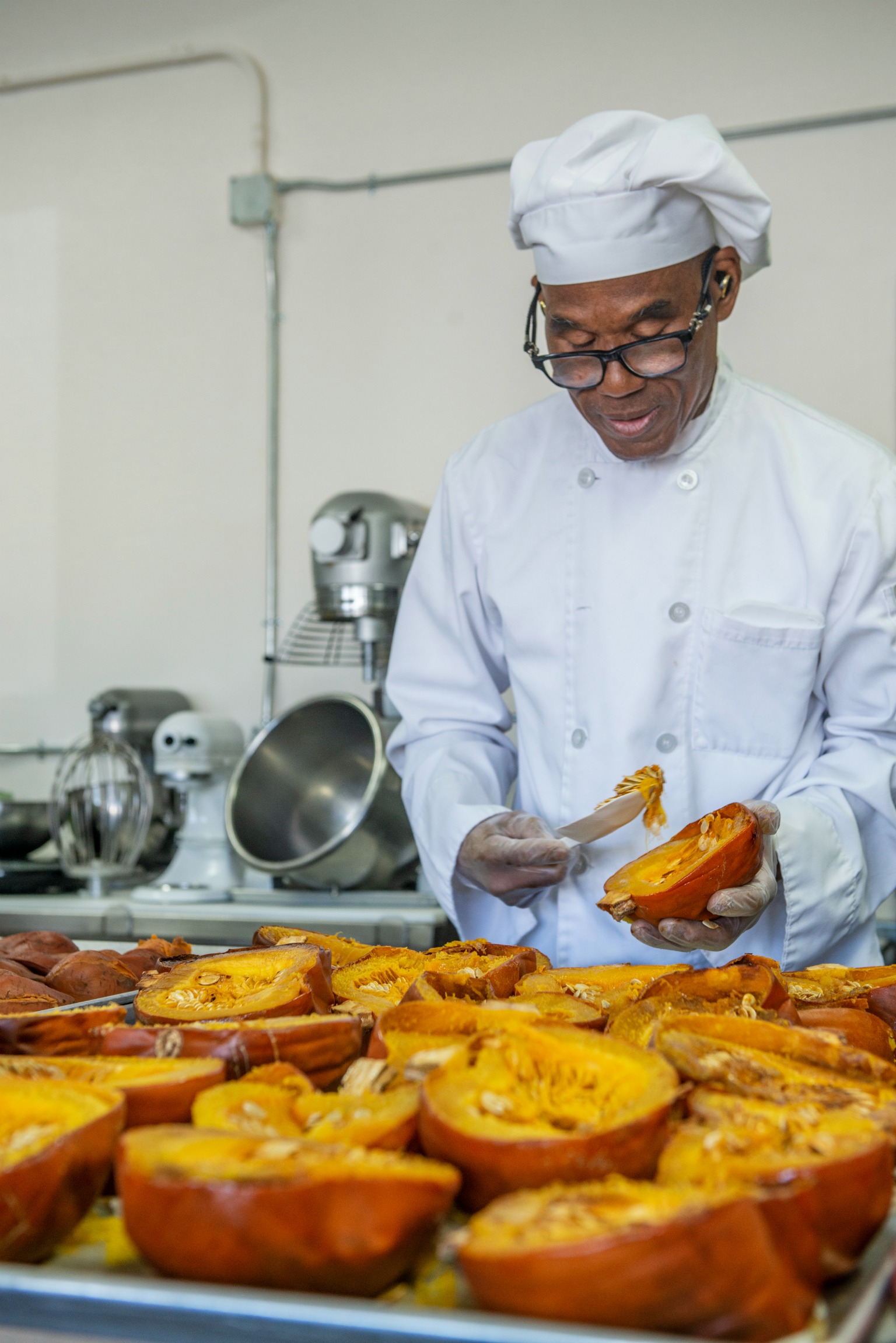 Fully embracing Pacifia’s small-town vibe, the pie shop is getting new flooring and counter seating installed to encourage customers to stay a while and enjoy a cup of coffee with a slice of pie. Haruwn also makes the farmers market and festival rounds—whether it’s Pacifica’s Fog Fest or Filoli’s Harvest Festival—baking up to a thousand-plus pies to sell out of Shampa’s Pies booths. “I meet new and old customers, friends from all walks of life and children,” he says.  “At the Mountain View Art and Wine Festival, people came just to support me. I was so honored.”

Pumpkins and California’s waves both get bigger in the fall, and Haruwn gets excited about both. He gauges swells, tides, currents and sandbars to determine the best water conditions for boogie boarding. Wearing a wetsuit and fins, he swims out to where the waves are breaking at one of his favorite surf spots like Ocean Beach or Fort Point in San Francisco, or Gray Whale Cove in Half Moon Bay as often as possible. “I do some of my best thinking sitting out there between waves with the sand, blue sky, the movement of the ocean and dolphins swimming by,” he says.

Haruwn returns from the oven at the back of the pie shop. “Doesn’t get any better than this,” he says, holding a tray of just-baked pumpkin pies, the first batch of the season. The sweet smell of sugar and spice accompanies the pie’s flaky, golden-brown crust, with creamy pumpkin filling. An eight-inch-tall sugar pie pumpkin sits on the wood countertop. The variety is naturally sweet and grown especially for baking. To transform raw pumpkins into pie, Haruwn slices them in half, roasts the halves, scoops out the seeds and turns the sweet insides into filling, which is then poured into pie crusts and baked. 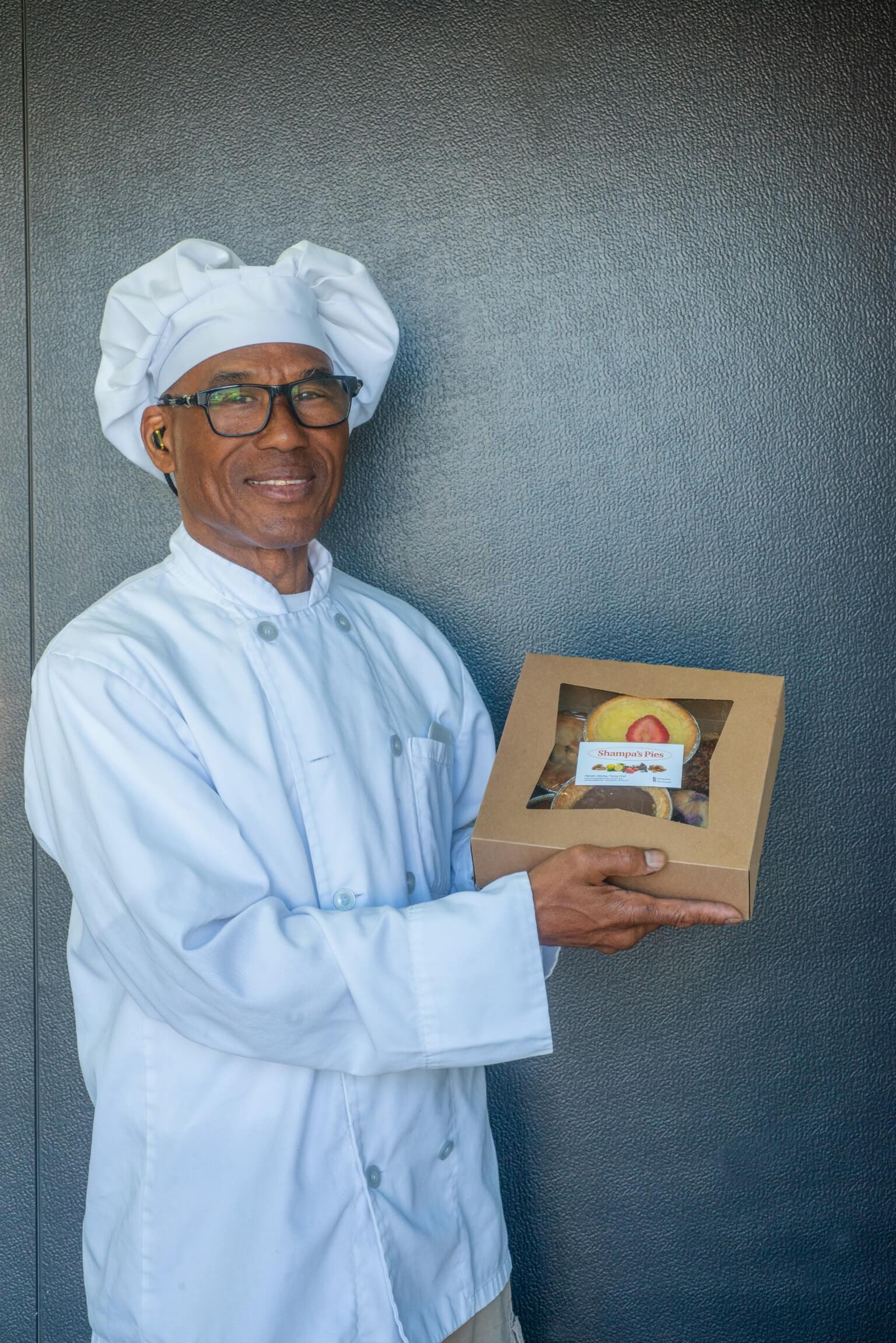 Shampa’s Pies keeps several pies on the menu all year, like chocolate cream and apple cobbler, rotating in seasonal fruit pies like cherry and peach. Fruit used in the pies is organic and locally-sourced. The pie crusts are made with non-hydrogenated palm fruit shortening, a healthier alternative to lard. The pie shop makes vegan, gluten-free and dairy-free versions of the pies upon request, making it possible for more people to enjoy them. “I learn everything from my customers. They tell me what they like and what they don’t like,” says Haruwn.

The solitude Haruwn experiences boogie boarding ocean waves and working by himself baking pies brings him the same sense of peace. “Boogie boarding helps clear my head and mind,” says Haruwn, as does the placement of apples on the Spiralizer, pouring of filling and plastic wrapping of pies. Returning customers say that the made-from-scratch pies they get from Shampa’s bring back memories of good times. Haruwn expresses his inner peace through his TLC-infused pies. “This is my humble way of helping the world be a better place,” he says with a smile.

Using a potato/vegetable peeler, peel the outside of the half orange shell, take care to avoid the white membrane interior. Dice the orange peel and place in a saucepan with the water. Boil for 10 minutes and then drain and set the cooked peel aside.

Place over medium-high heat and bring to a boil. Then reduce the heat to a simmer and partially cover the pan. Simmer for 10-15 minutes until the apple is soft and the cranberries have burst.

Transfer to a serving bowl and cool before serving as a side dish or topping.