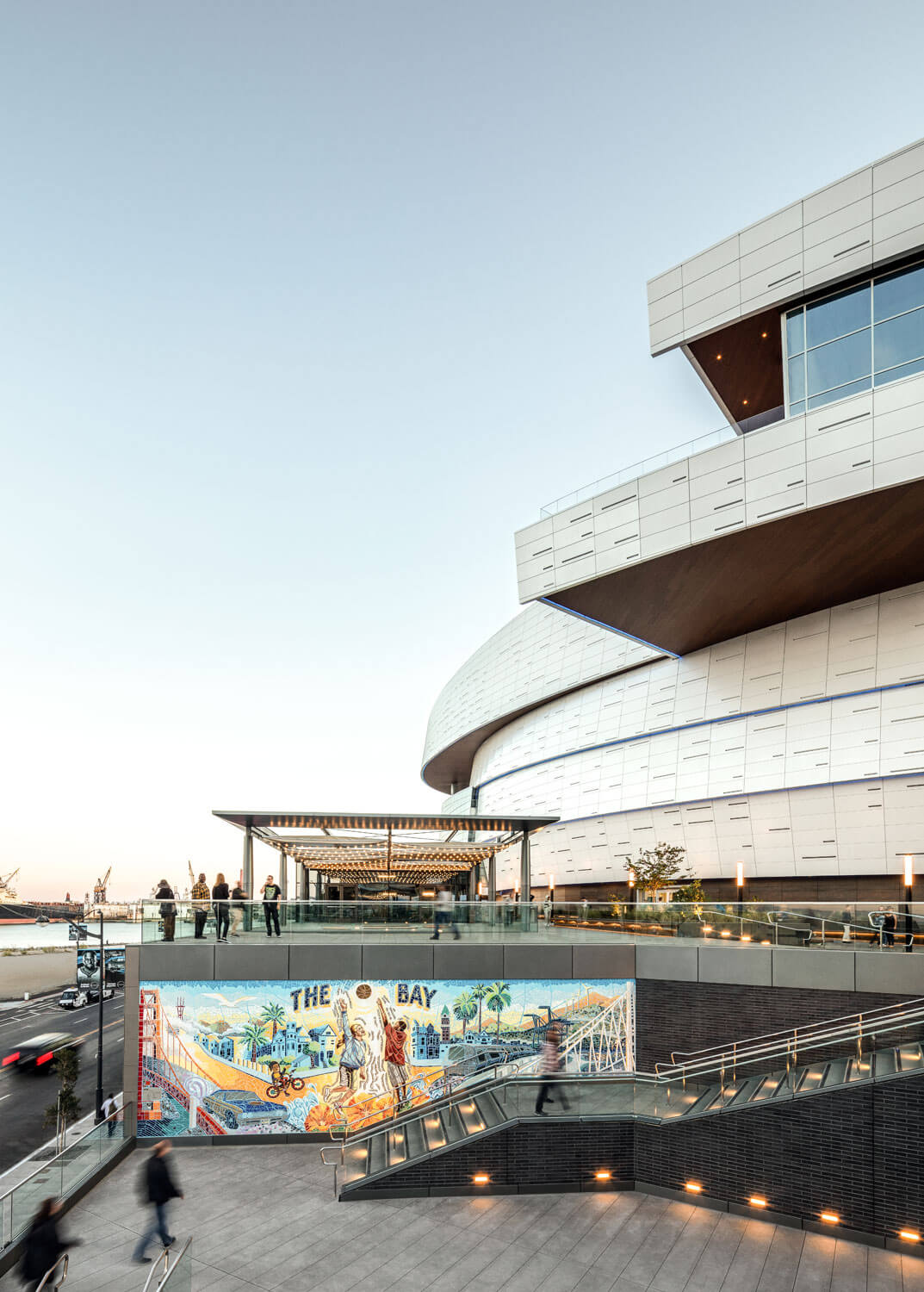 Home court tip-offs tend to be at 7:30PM, giving us Peninsula folk more than enough time to leave work or school behind, nab a seat on CalTrain and land in Thrive City to cheer on the professional sports team that unites the entire Bay Area.

The Golden State Warriors unveiled their new home this season: the Chase Center, a $1.6 billion state-of-the-art arena that moonlights as a concert venue and, from a bird’s-eye view, could be mistaken as a plump, rotating ninja star. With countless motion lines carved into its eggshell-white edifice reaching over 12 stories high and sharp edges that slice through the gusty bay shore winds, the Chase Center is the product of a legendary team backed by “We Believe” investors.

An arena of this stature couldn’t land along the southern flank of San Francisco without making a splash. What was previously the flat Mission Bay, a dried-up swath of marshland once used for dumping debris after the 1906 earthquake, became the hot new thing when multiple medical centers for the University of San Francisco and Kaiser Permanente sprouted up in the early 2000s. Soon, the apartment complexes arrived and the neighborhood facelift reached a new benchmark when the ribbon was cut on the Chase Center in September.

New neighbors Kaiser and the Warriors teamed up to transform the 11-acre square surrounding the arena into Thrive City, a neighborhood the size of a city block designed to attract sports fans, foodies, socialites and urban explorers alike. The Chase Center may be the main attraction but around its circumference are new and classic restaurants as well as charming boutique hotels waiting to accommodate your next staycation.

A neighborhood envisioned with the future as its fulcrum, Thrive City is just a weekender duffel bag away. 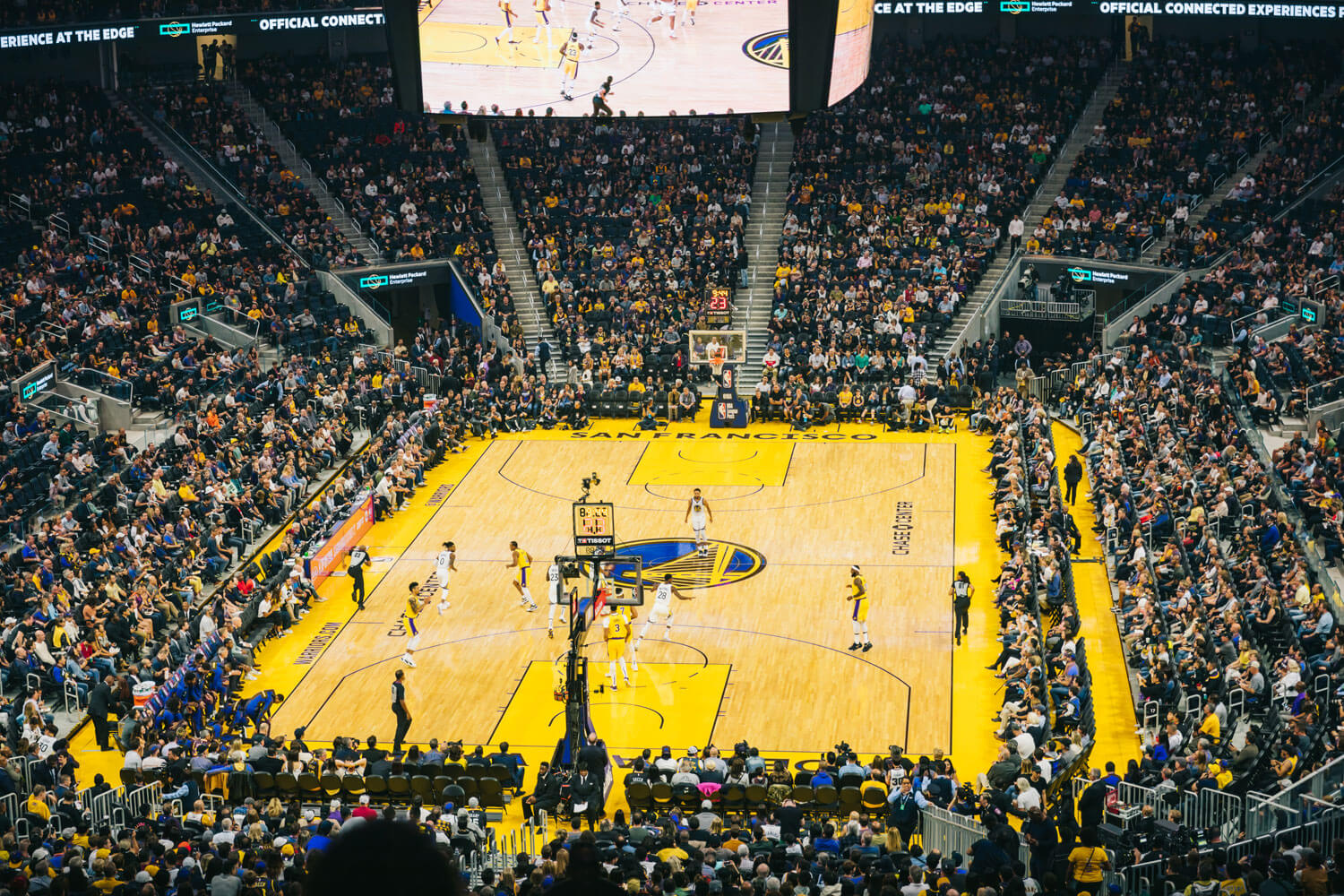 The Center of a Dynasty

In the week leading up to the NBA season opener against the Los Angeles Clippers in late October, local headlines described the upcoming Warriors season with more self-deprecation than the usual tenors of excitement for describing the three-time champions. “Strap in, Warriors fans. This season will test your faith,” opined Ann Killion, sports columnist for the San Francisco Chronicle. Sure, both superstar fan favorites are out with injuries for likely the whole season (praise be to the toaster signer: Klay Thompson and prayers be to Steph Curry’s left hand), but if fans are to make peace with a potential adjustment year, luckily it coincides with the debut of the most exuberant arena to ever join the league.

The Chase Center’s bells and whistles haven’t ceased ringing since Metallica and the San Francisco Symphony performed together on its opening night. Approaching the hoop-shaped behemoth from the west side, fans are met with a flashy video board fueling excitement with action clips of Curry fanfare. The west plaza features photo opportunities from atop a wide spiraling staircase, which calls to mind the Red Steps in Times Square, alongside soon-to-open restaurants such as Gott’s Roadside and a food hall by Michael Mina. Inside the arena are plenty of dining options including Peninsula favorites Sam’s Chowder House and Tin Pot Creamery.

To accommodate the boundless confusion fans will feel for experiencing a brand-new arena, the Chase Center went on a hiring spree of ushers and staff (their numbers will rival the amount of opposing team fans who attend a game on any given night). Bounce from staircase to escalator until you land in your cushioned seat. Immediately, the NBA’s largest scoreboard begins to lure eyeballs to its 9,699 square feet of electrical spectacle to guide the game.

A sports arena built for a modern San Francisco would be remiss if it lacked technological advancements fit for a spacecraft. Remember that classic racing game you watch on the scoreboard where fans cheer for a vehicle of a specific color? At the Chase Center, there’s an app for that. Fans are encouraged to download the Chase Center/Warriors phone application to partake in their own game-time games, like the one where they choose a car on their device and through repeated taps on the screen, a speedier digital race car emerges from the pack. (Blue smoked red by a mile at the Lakers pre-season bout on October 18.)

Another feature on the app is the section dedicated to detailing concerts and events hosted at the Chase Center. That massive scoreboard that hovers above the court retracts, disappearing into the heavens of the dome, leaving unobstructed views for up to 18,000 concertgoers.

The Chase Center was properly laid out so there’s not a bad seat in the house (even the nosebleed section offers fine views of the stage or court) matched by an acoustic design that delivers power without the hearing loss. When The Who took the stage in October, with Palo Alto’s Loren Gold behind the keyboard, the rock and roll behemoths performed heavily without exploding eardrums. Moreover, once the game buzzer rings or the lights go up after the encore, spilling out of the arena is swift and surprisingly smooth. Our trepidations of a traffic-congested nightmare was merely mongering. 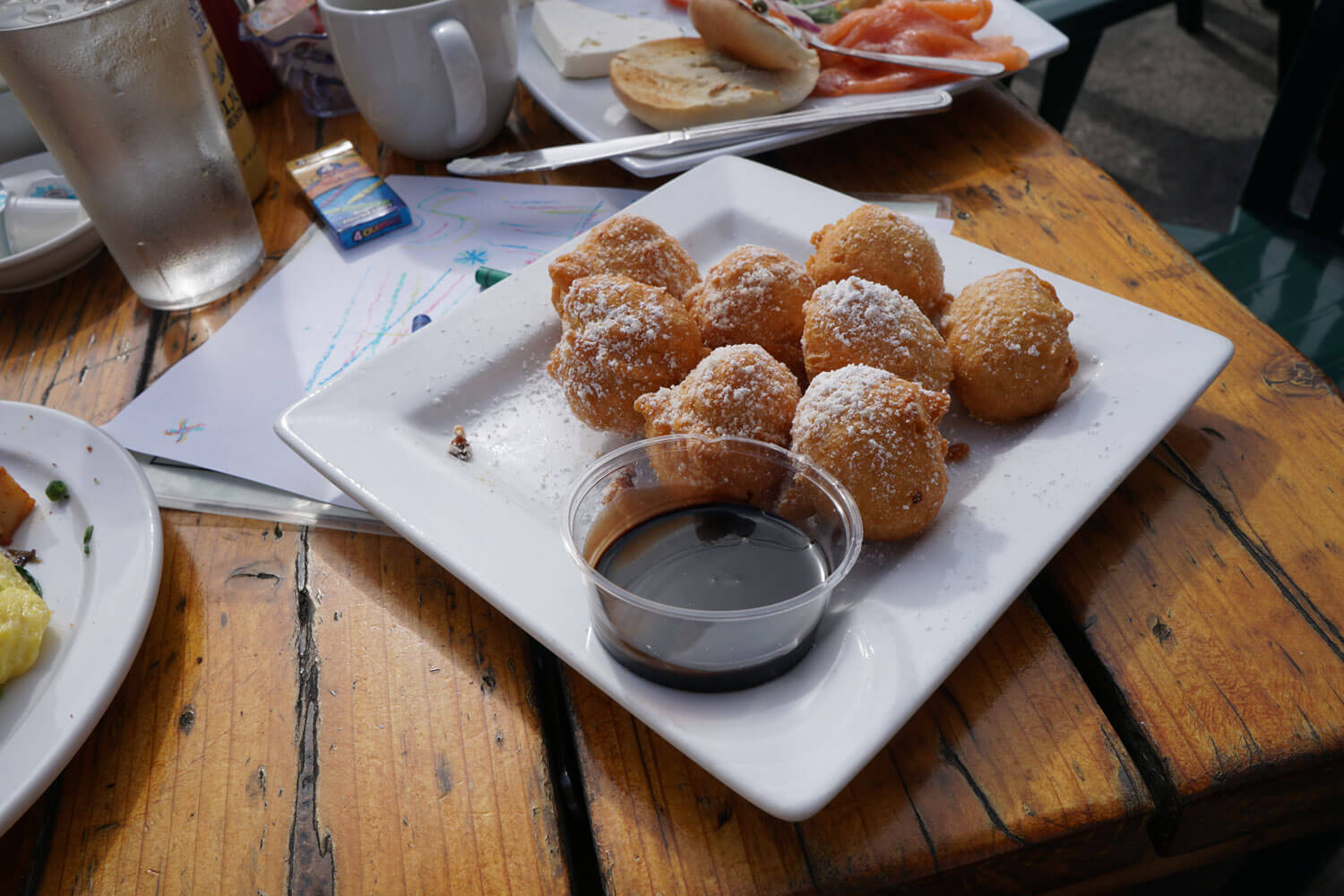 News of the arena broke in 2012 back when Mission Bay typically connoted a hospital visit. But the area already had its fair share of charming restaurants, most notably The Ramp, located a block from 1 Warriors Way. A former bait shop at the edge of the bay, The Ramp emerges from the water as the de facto pre-game or concert dining hub.

Views of U.S. Navy ships complement a menu of simple favorites: the fish tacos feature grilled tilapia and corn tortillas topped with mango jicama salsa while the spicy black bean burger is served with chipotle horseradish aioli. A full bar is replete with tropical cocktails—the BananaRama mixes banana Bacardi, Malibu rum, orange juice and pineapple juice with a splash of grenadine, a drink that inspires the use of public transportation instead of a car. The weekend brunch menu runs until 3:30PM and offers homemade doughnut holes—the French variety, arriving with a side of chocolate fondue.

If too stimulated by a game or concert to head home right away, The Ramp is also the city’s premier salsa dance club with frequent weekend parties. Mind their online calendar since winter events are on the lighter side.

Another kitchen that’s benefiting nicely from the Chase Center’s arrival is the Mission Rock Resort, home to an unmissable oyster happy hour and seafood staples such as Vongole and the Mission Bay Cioppino, which unites clam, salmon, mussels, shrimp, Dungeness crab and calamari in a tomato-based stew.

If it’s drinks you seek and you’re out on a weeknight, look no further than the mirthful School Night, located a few blocks from Thrive City at the edge of the Dogpatch. Open explicitly Monday through Friday, as the name suggests, School Night specializes in hand-crafted pisco, agave, and whiskey cocktails. Peruvian bar manager Enrique Sanchez hand-crafts the rotating menu, devloping his style since pouring his very first pisco sour at a family gathering when he was a lad of 14. He’s since had years to experiment and perfect his creations.

If pisco is your poison, give the Prom Date a taste (pisco albilla, amontillado, nonino, Peychaud’s bitters and absinthe) or embrace the agave within the Detention, which melds mezcal, orgeat, lemon, angostura with habanero. Whiskey lovers have four options to select from, including the curiosity-piquing School Nurse, a mix of bourbon, lemon and vanilla with a red wine splash. 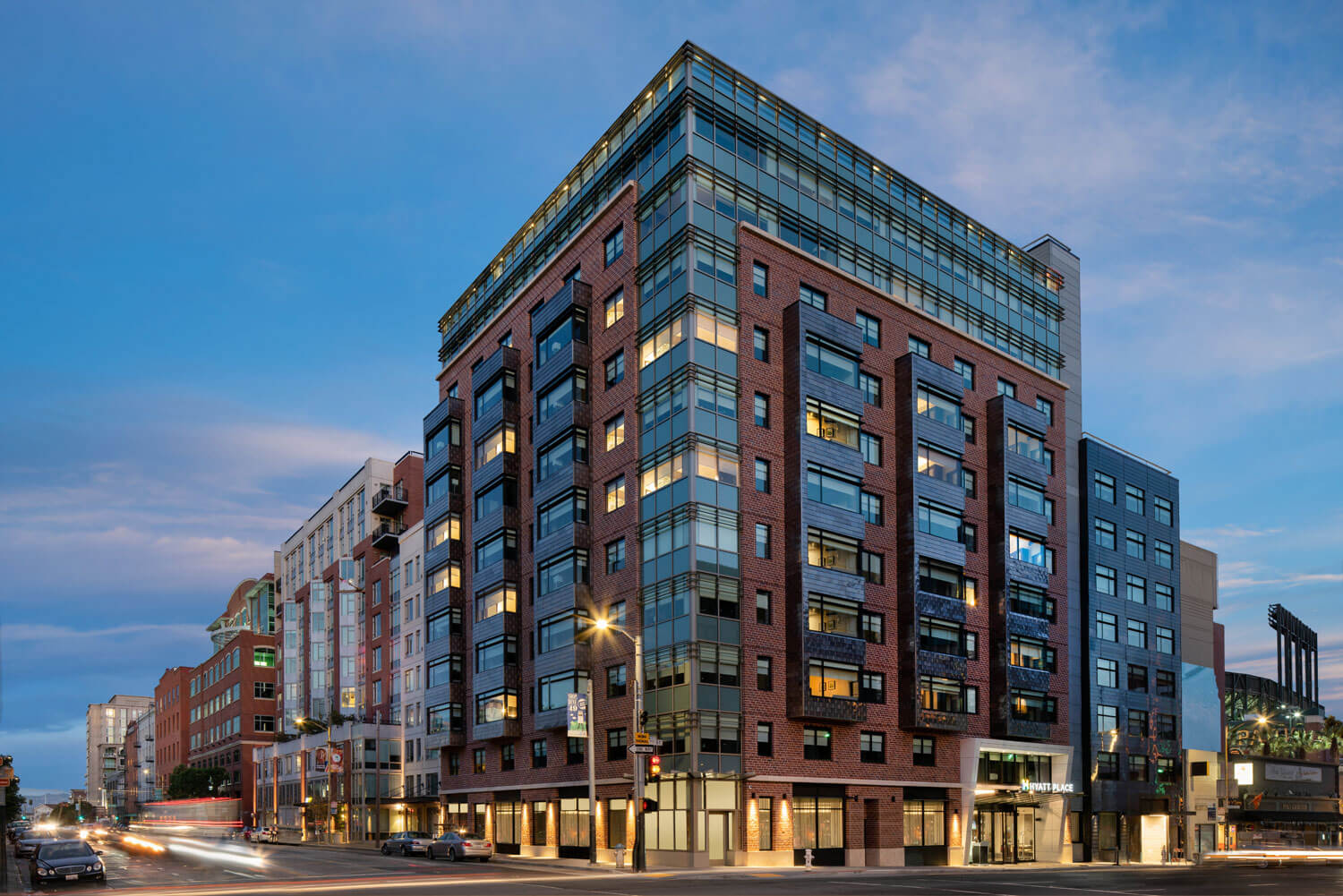 The rejuvenation of South of Market and China Basin, the neighborhoods just above Mission Bay separated by the slim Mission Creek Canal, began in 2000 with the construction of the Giants stadium, now called Oracle Park. However, it wasn’t until 2017 that the area’s first hotel went up.

The casual and clever Hotel VIA, a 159-room boutique, was the vision of two Los Altos brothers and a pair of consultants from The Cupertino Inn who sought to celebrate the area’s tech character without sacrificing warmth and hospitality.

“We looked around this neighborhood where all the high-tech companies reside,” explains Jerry Leap, Hotel VIA’s director of sales and marketing. “We knew that building a small indie hotel had to be at the forefront of technology but hospitality is all about the face-to-face interaction. We walk a fine line of being technically advanced but without taking out any of the humanity.”

A human touch is found throughout the hotel, from the pieces of chocolate awaiting you in the room to the sophisticated interior design where light fixtures near the elevator resemble diamond icicles and patio furniture looks dipped in gold. With tones reminiscent of fresh snowfall, the rooms and suites feature modern furniture with accents of blue in the sofas and lounge pillows.

And in a unique twist uncommon for an independent inn, Hotel VIA has an app all its own. Designed to expedite check-in, the app also provides a map of the neighborhood, fully stocked with restaurant and bar recommendations.

Around the corner is another option for a cozy night. The bright rooms at the Hyatt Place San Francisco/Downtown offer views of the twinkling city below. Currently in development is the hotel’s rooftop terrace (slated to open in summer 2020), which will not only offer a gorgeous view of downtown San Francisco and Twin Peaks but a peek into Oracle Park as well, located just across the street. The brick edifice matches the neighborhood’s character and the spacious suites come with separate lounge areas to maximize relaxation.

Both hotels are a brisk 15-minute walk to the Chase Center (or a fifteen-second walk to Oracle Park), establishing either venue as an ideal hub to charge your batteries for a Thrive City getaway.