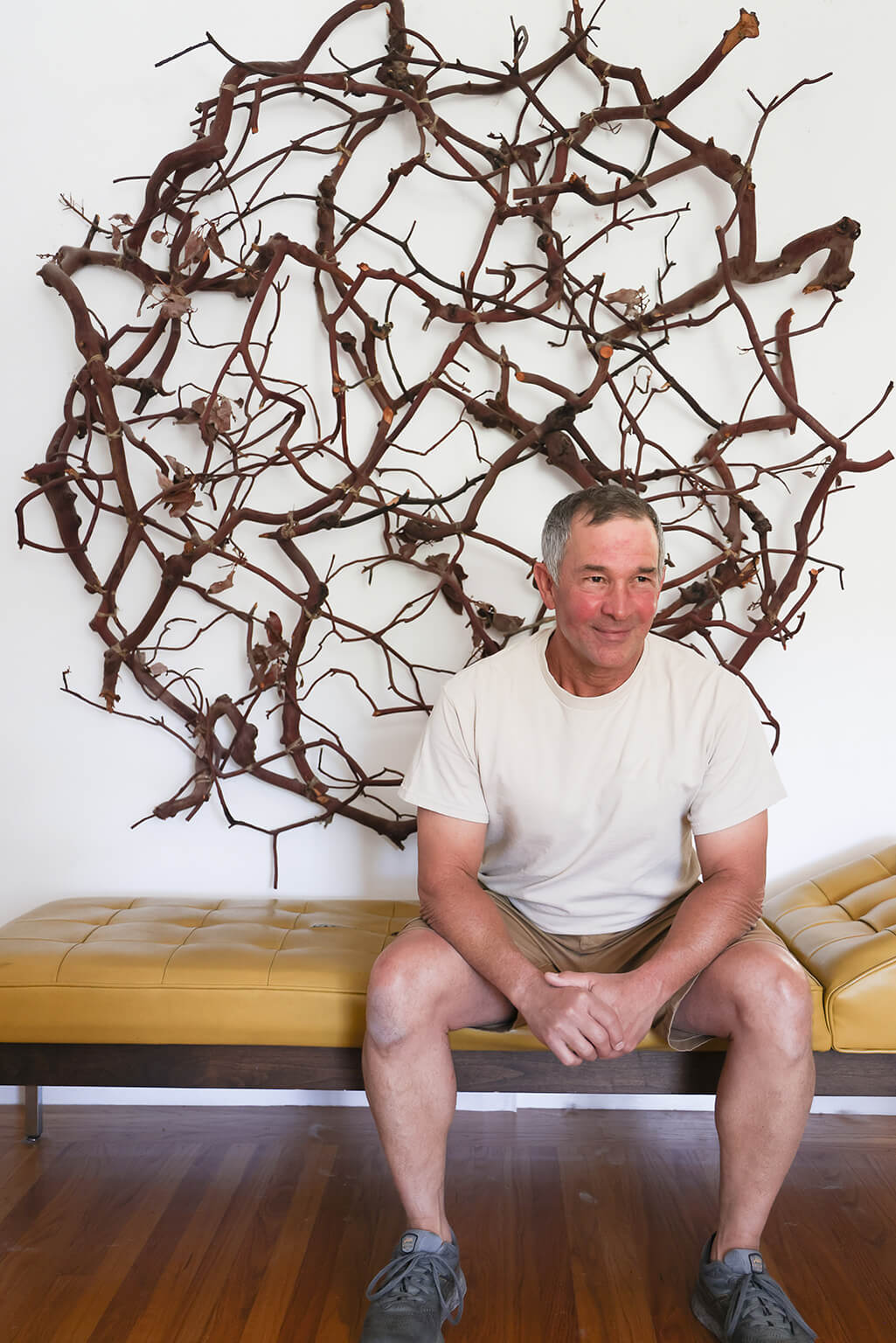 Dramatic twig sculptures dance throughout Paul Schick’s backyard workshop where he brings new life to foraged manzanita and redwood branches. To most, the large piles of sticks strewn about the garden might seem like a spring cleaning project, but to Paul they serve as his muse. “Look at this,” he exclaims, picking up a weathered branch. “It’s like a work of art in itself. It’s so sculptural with its various circles. I go nuts!” Paul’s passion for twig art has garnered demand from Hollywood and top designers for decades.

Paul greets me in a canary yellow shirt after work at his part-time job at Pine Cone Lumber. “A coincidence?” I question. He smiles, “Maybe not.” At 60, he enjoys working with his hands and often envisions artistic projects made of wood, while stacking lumber at the seven-acre lumberyard in Sunnyvale. After work, he performs more delicate tasks with his hands, sculpting massive wall compositions: redwood twigs forming waves, manzanita woven into webs. Not only is his raw material affordable, it also creates the ultimate sustainable art. While paints contain plastics and toxins, twig art completely decomposes. 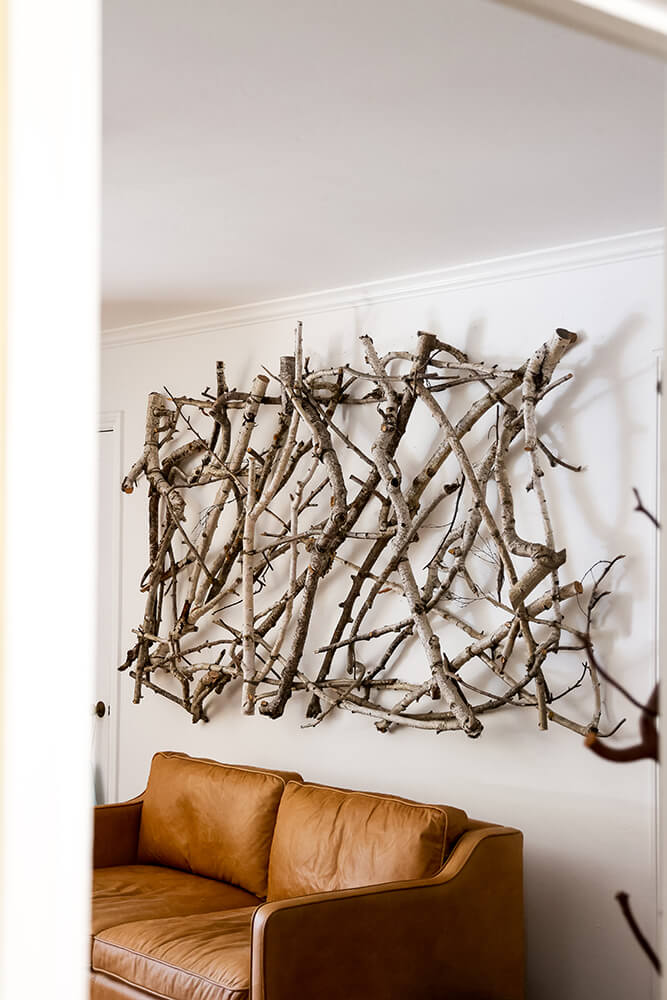 A Los Altos native, Paul grew up spending time in the open spaces of the Peninsula where manzanita and redwood trees thrive. He describes his childhood in Los Altos as laid-back, frequently exploring the outdoors after school at Los Altos High. As a Boy Scout, Paul also enjoyed camping in the coastal forest of the Presidio in San Francisco. “I have so many good memories of going out in nature growing up,” he observes, “and my work is just a continuation of that.”

Paul pursued his artistic interests in Los Angeles, drawing inspiration from talented teachers and students at Otis School of Art and Design, where he earned a degree in illustration and communication design. As for early influences, he cites sculptors Deborah Butterfield, Andy Goldworthy as well as abstract painter and sculptor Charles Arnoldi, whose work can be viewed at the Anderson Collection at Stanford. “Arnoldi was painting twigs and creating twig sculptures,” he shares. “I fell in love with it—it just resonated with me.”

Paul recognized a clear creative path forward. After graduation, he followed his passion for fine art full-time and began crafting twig compositions and sculptures. Soon, he was selling out of a showroom in Los Angeles, and then his work started appearing on television shows such as Will & Grace. One day, Farrah Fawcett saw his work at Rodney Dangerfield’s home and gave him a call. “Farrah wanted a sculpture for Ryan O’Neal,” Paul recounts, “so I made a special one for him.” Paul’s installation sites range from the walls of Wilkes Bashford and Neiman Marcus to a Four Seasons Resort in Arizona. Several of his large sculptures grace restaurants and hotels in Las Vegas, including a 16-foot free-standing column at Wynn Las Vegas and another on display at one of Wolfgang Puck’s restaurants. 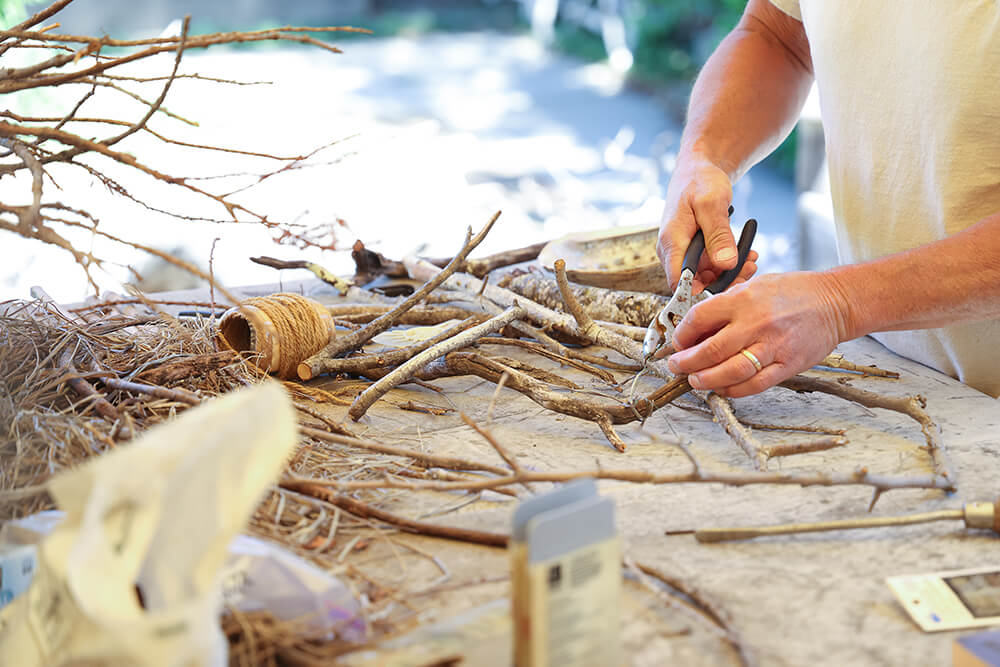 The creative process for Paul requires a good cup of coffee and a curated selection of twigs for the piece he envisions. After fumigating the wood with a non-toxic product to remove bugs, he begins sculpting and notching the twigs, tying them together with sturdy string. “I get a lot of manzanita from the Woodside hills,” Paul relays. “I am always looking for white birch, and if I see a dead branch or tree, I leave a note for the owners and sometimes people write back.” Paul also works with driftwood and took on the challenge of sculpting lanterns along with a perfectly-balanced and engineered five-foot driftwood seahorse for the Newport Beach Country Club. 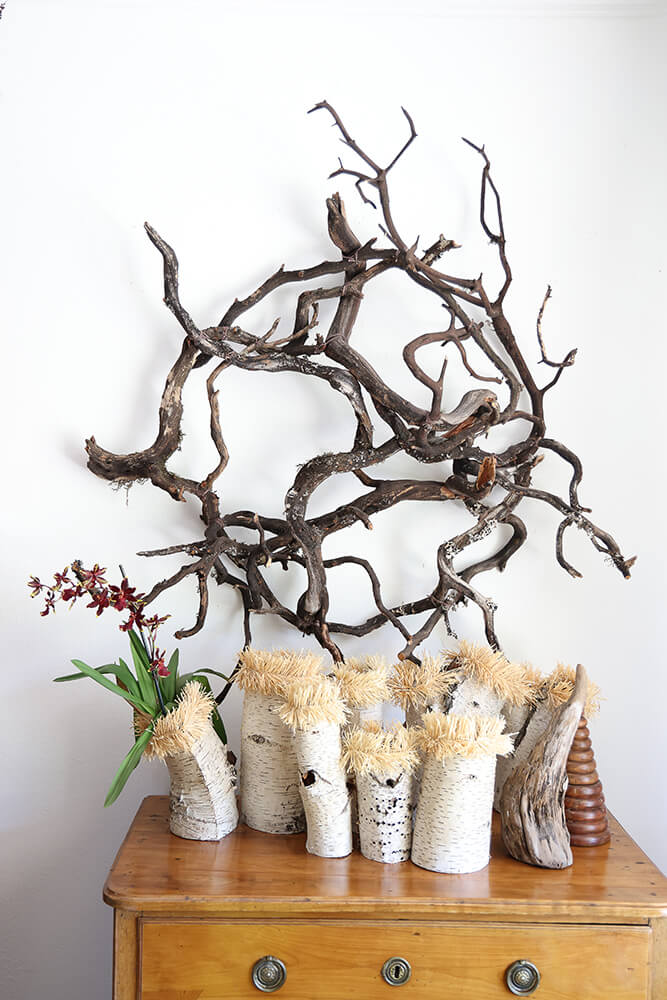 Locally, Emily Joubert in Woodside showcases Paul’s sculptures as well as many of the Bay Clubs throughout the Bay Area and California. His art also decorates the walls at Fremont Hills Country Club in Los Altos and Foothill Tennis and Swim Club in Palo Alto. For one of Paul’s most unique projects, renowned SF designer Ken Fulk commissioned him to help sculpt part of a hobbit kingdom for a $10 million wedding in Big Sur. Paul often works on commission, and his sculpture and wall compositions range in wood colors from red to gray to brown. “It’s also fun to make pieces that aren’t commissioned,” he emphasizes. “Then I have absolute freedom to create whatever size and shape I want.”

As he wrangles and weaves his twig creations, Paul gleans inspiration from many sources including Palo Alto’s Gamble Gardens, architecture and music. He credits his wife Wanda for encouraging his work and lending a hand during installations. But he emphasizes that the twigs themselves are his ultimate muse. “I see the twigs as a creation from God,” he explains. “I fell in love with twigs and their 3D quality and it’s always rewarding when I finish a sculpture.”