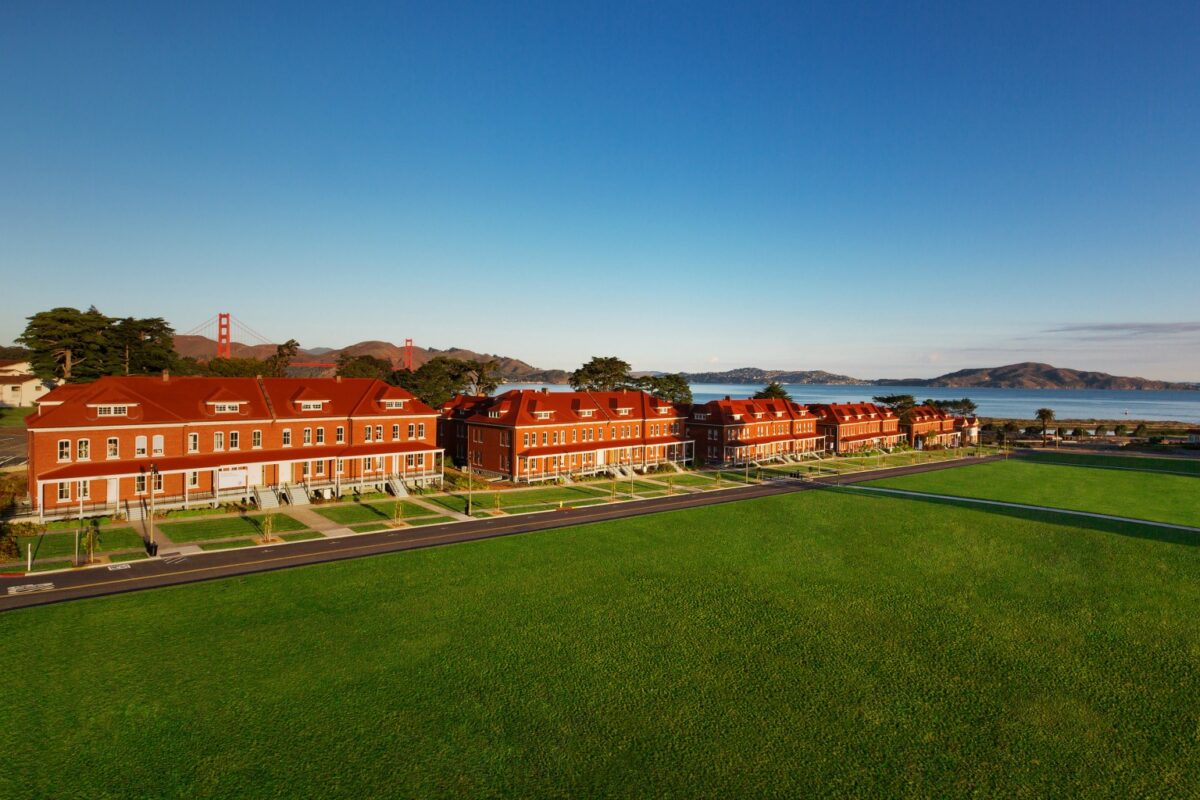 Looking for a getaway that mixes military history, outdoor adventure, hidden art treasures, a quirky blend of curiosities, along with luxury lodging and great dining options? Look no further than the Presidio of San Francisco—and it just happens to be the northernmost point of the Peninsula!

First, a bit of background: Part of the Golden Gate National Recreation Area, the Presidio Trust was created in 1996 by the U.S. Congress to manage 80% of the park land, which includes the interior sections. The National Park Service manages the coastal 20%. The 1,500-acre Presidio is home to 330 native plant species and 350 species of wildlife. It’s divided into four regions, all best explored on foot or on bicycle: Main Post, Crissy Field, Golden Gate and Southern Wilds.

for the military history buff

Formally established on September 17, 1776, the San Francisco Presidio has been administered successively as military headquarters by Spain, Mexico and the United States. Throughout its history, it’s been the launching point of most of America’s military engagements in the Pacific. Until its transfer to the National Park Service in 1994, the Presidio was the longest continuously operated military installation in the United States.

A good beginning exploration of the Presidio’s military history is to park in the area along East Beach near the Marina Gate and head west along the Golden Gate Promenade, which stretches along one side of Crissy Army Airfield that operated from 1921 to 1936.

Continuing past the aptly named Warming Hut—a perfect spot for a hot beverage when the fog has descended—you can take the trail slightly uphill to Battery East or continue on to Fort Point. The former has grass-covered earthen fortifications and brick-lined magazines. The views are spectacular in multiple directions.

Built over a period of eight years beginning in 1853, Fort Point became obsolete following the Civil War because brick forts of its kind were easily breached by rifled artillery. It achieved some 20th-century fame as the scene in the 1958 Alfred Hitchcock film, Vertigo, where Scottie (James Stewart) saves Madeleine (Kim Novak) after she jumps into the San Francisco Bay.

If you return on the other side of Crissy Field, you’ll pass the Military Intelligence Service Historic Learning Center. It was here that four dozen or so Japanese American soldiers were secretly trained as military linguists at the beginning of World War II. In a bit of irony, just a few hundred yards from the school, Lt. Gen. John L. DeWitt issued the order to intern 120,000 Japanese Americans living on the West Coast. Note: The MIS Historic Learning Center is open only on weekends.

No visit to the Presidio would be complete without a stop at the Main Post with its distinctive red brick buildings and parade grounds. It’s here that you’ll find the Walt Disney Family Museum (closed Tuesdays). for the outdoor adventurer

For the hiker or cyclist, the Presidio boasts 24 miles of trails and 25 miles of bikeways. Our favorite hike is a 5.5-mile loop that includes the Southern Wilds. Starting at the Main Post near the Lodge at the Presidio, head out on the Presidio Promenade, which passes the Korean War Memorial as well as the San Francisco National Cemetery, one of the last two remaining cemeteries within San Francisco city limits.

The Presidio Promenade intersects with the Bay Trail before becoming the Juan Bautista De Anza National Historic Trail, which climbs gradually, eventually coming to Mountain Lake, the last natural lake in San Francisco. The Mountain Lake Trail continues past Presidio Golf Course, one of the oldest courses on the West Coast. Built in 1895 as a nine-hole course for army officers, it has hosted presidents—Theodore Roosevelt—baseball players—Joe DiMaggio—and even famous golfers like Arnold Palmer. It’s also the place where people sought refuge following the 1906 earthquake and fire.

Return to the main post via Lover’s Lane, an historic trail established in the 18th century as a shortcut used by Spanish soldiers and missionaries to get from the Main Post to Mission Dolores, located three miles south of the Presidio. It’s in this area where the art lover gets his or her fix.

Note: Presidio trails are dog-friendly but do heed the coyote warnings and keep your dog leashed at all times.

for the art enthusiast

British artist Andy Goldsworthy has four different works on display in the Presidio, which can be explored together on a three-mile walk. The first is Spire, a 100-foot-high structure constructed in 2008 by stitching together the trunks of 35 cypress trees that had been removed in the area to make way for young saplings.

When walking down Lover’s Lane, you are alongside Goldsworthy’s Wood Line, inviting you “to contemplate where the life of a tree begins, the fertile earth.” Made up of eucalyptus branches, it is more than 1,200 feet in length. School children on field trips can often be seen scampering on top of it.

Located close to the Presidio Officers’ Club in a small structure that housed gunpowder and munitions during the Civil War, is Goldsworthy’s third installation, and the first he created indoors. Tree Fall “invites viewers to come inside and to contemplate the relationship between what is ‘natural’ and what is ‘built.’”

Earth Wall is the fourth installation, one that is located within the Presidio Officers’ Club itself. The sculpture’s six-foot-wide sphere was shaped using naturally curved Presidio eucalyptus branches. Clay taken from the courtyard during the club’s renovation was used to bury the sculpture within a rammed earth wall. and quirky discoveries not to be overlooked

One of the delights of exploring the Presidio is coming upon the unexpected. Yes, certainly Goldsworthy’s artworks but also the more mundane, like a bowling alley, one not particularly historic, as it was built in 1989. Today, the Presidio Bowling Center is a favorite of school kids. It takes on a different vibe on Saturday nights after 10PM when it offers “glow in the park” bowling with black light.

The 450-square-foot Presidio Pet Cemetery invites the visitor to ponder gravestone inscriptions written with care and affection. A rickety white picket fence marks the boundary of the cemetery, which may have been first used just after World War II and is now fully occupied. The right-hand corner of the cemetery was apparently the section reserved for birds. “Roc’’ the Macaw rests there, as does “Our Knuckle Head Parakeet to Paradise.”

camping on a hilltop, luxe lodgings and serious eateries

While it’s possible to see at least a portion of what the Presidio offers as a day trip, it’s more satisfying to immerse yourself there over a period of days. The good news is that you don’t need to settle for a dorm room—or food.

The Rob Hill Campground opens for the 2019 season on April 1, extending through October 21. Located at the Presidio’s highest point, it is the only group campground in San Francisco. Reservations are required.

The Inn at the Presidio was originally Pershing Hall Bachelor Officers’ Quarters. Built in 1903, it’s on the National Register of Historic Properties and has been beautifully renovated. It offers 22 rooms in the main building—17 with fireplaces—and four more at the adjacent Funston House, which can be rented in entirety for family reunions (or business functions). Rooms with views of the Bay and Golden Gate Bridge are on the third floor.

The Lodge at the Presidio opened in 2018 and quickly claimed the top spot on TripAdvisor’s list of best hotels in San Francisco. Built in the late 1890s as part of the Montgomery Street Barracks, over the years it housed six artillery companies, two infantry companies and a cavalry troop. It is the closest hotel to the Golden Gate Bridge, which can be viewed while enjoying the outdoor fire pit.

Guests staying at the Inn or the Lodge are treated to particularly well-stocked continental breakfasts along with wine and cheese in the afternoon. Both are pet-friendly. They are also quite popular, so book well in advance, particularly on weekends. While there are multiple options for a quick snack, there are a number of fine dining establishments within the Presidio. Located on the Main Parade Ground, The Commissary is housed in a former mess hall. Overseen by award-winning chef Traci Des Jardins, it’s open for dinner Monday through Saturday.

Located inside the Presidio Officers’ Club, Arguello is Traci Des Jardins’ other Presidio restaurant. It features Mexican cuisine and a contemporary bar with craft cocktails. Its outdoor patio is a popular gathering place, complete with blankets for bundling up when the fog rolls in.

The Presidio Social Club is located just inside the Presidio’s Lombard Gate entrance. The dinner menu features innovative takes on classic ‘40s and ‘50s American standards, like meatloaf, deviled eggs, grilled liver and onions, prime rib and pineapple upside-down cake, as well as 21st-century options. It is extremely popular, so reservations well in advance are advised.

When you’re making plans, presidio.gov/visit is a good place to start. And don’t forget to drop by the Presidio Visitor Center at 210 Lincoln Boulevard for exhibits and maps to enhance your experience.