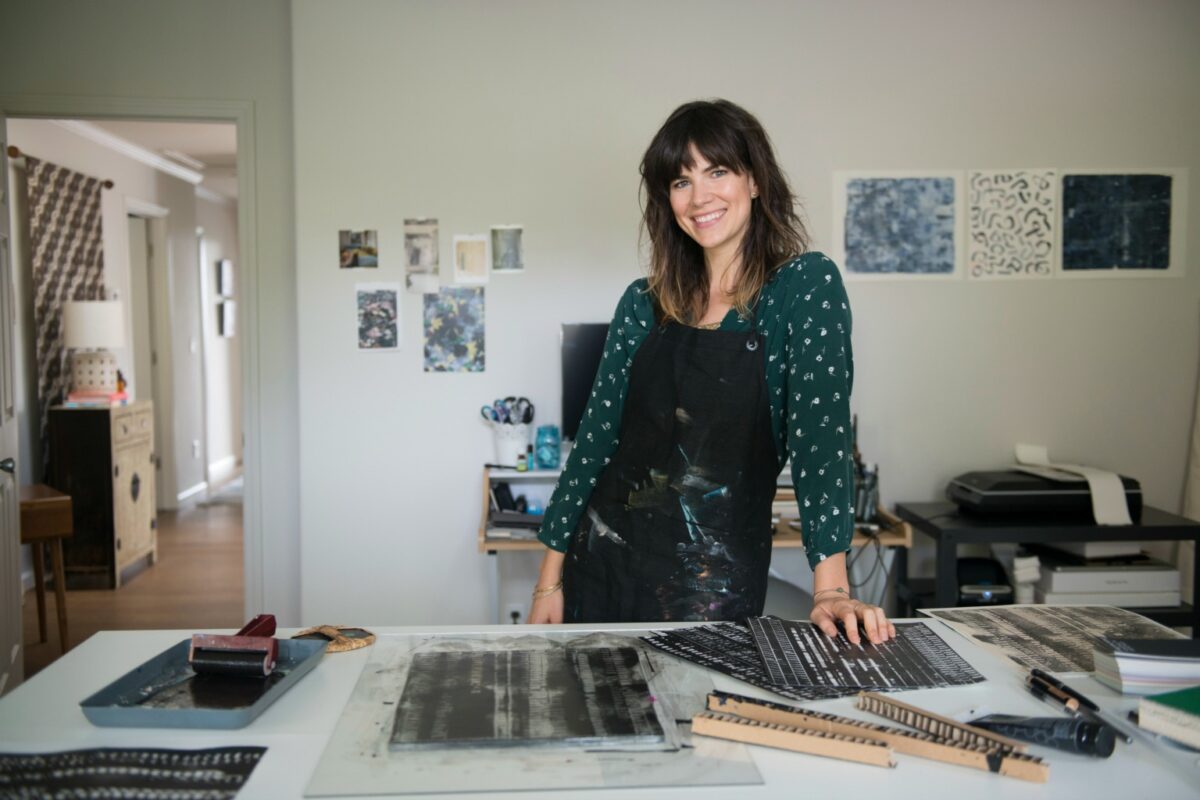 During a recent walk on the beach not far from her home and studio in Half Moon Bay, designer and artist Kate Miller was struck by the sight of countless fragments of shells at her feet.

“I started thinking about shells and how people appreciate their inherent beauty but don’t give much thought to the whole life cycle of these natural objects—they are essentially abandoned homes and might have a few tenants before they are permanently vacant,” she says. “Then begins a new cycle, one of gradual exposure to the elements as they are broken down into smaller and smaller pieces. To me, this process is as poignant and beautiful as the shell itself.”

The overlooked details in nature—rusted drain pipes, the differing shapes of poppies or the finite life cycle of a seashell—become inspirational fodder for Kate as she envisions new wallpaper and textile designs to create through her company Elworthy Studio.

Kate’s process begins with an idea she’ll transform into sketches, filling up her notebook with ways to adapt the concept into interior décor. She prioritizes editing, and sometimes while working, she’ll keep in mind a quote from renowned mid-century designer Charles Eames: “The details are not the details; they make the design.”

“I spend a lot of time exploring what I want to communicate and the editing process is the most important part,” Kate says. “How do I distill this idea or concept down to its essence?” Launched in 2015 and named after Kate’s great-grandmother who “spoke her mind, wore what she wanted and was the most energetic 90-plus-year-old I ever encountered,” Elworthy Studio’s wallpaper and fabrics have been installed in homes, hotels and offices across the country. Kate will introduce one large collection per year with four to six designs available in different colors and offered as either fabric or wallpaper.

Wallpaper has undergone a recent resurgence to become an unexpected trend within the design community. “I picked a very good time to become a wallpaper designer,” she reflects. “I’ve seen so many designers pop up. I had a conversation with a local wallpaper installer and she thinks this resurgence is going to be more long-lasting. The reason is technology. Digital printing allows artists to translate ideas into this medium and there’s this ability for unique expression.”

This liberation in wallpaper and textile design has also extended into how Kate chooses to operate Elworthy Studio as a company offering high-quality products that minimize environmental waste. “I want to control the controllables,” she says. Each wallpaper and fabric design is manufactured using eco-friendly raw materials and Kate only works with suppliers who share her commitment to social and environmental responsibility. Every item in the collection is made to order, which limits excess resources, and she encourages customers to send back samples whenever they’re finished so she can recycle or reuse them.

This last year was the first time Kate was able to accomplish a goal she had since Elworthy Studio began—giving back in a direct way. When she finished the year with a little profit, she donated a percentage to two environmental organizations that manage carbon offsetting projects: CoolEffect and Wildlife Works.

Kate was living in San Francisco when she founded Elworthy Studio, but she and her husband have since relocated to Half Moon Bay. The scenery change has been beneficial in multiple ways; she’s able to frequently take her toddler daughter to the beach and being engulfed by nature has led to a bevy of ideas, such as her exploration into the relationships between nature and urban environments.

“When I took myself out of the urban setting, I felt this sense of space and landscape,” Kate says. “There’s still this amazing juxtaposition of forces in the coastal Californian landscape. I’ll walk outside of my house and it can be serene and calm and other days it’s intense and wild.” This juxtaposition led to a collection of wallpapers and fabrics she calls Native. One of the designs, Botanica, was inspired by abstract shapes of poppy petals. Her process of creation entailed using one hand to dip her artist blade in ink to create petal shapes on paper, while her other hand sprayed the shape with water so that she could observe how water and ink interacted.

Kate accumulated 20 design concepts for her Native collection but only needed a few so she enlisted the help of her then-newborn daughter. “I made black and white flashcards with simple sketches of poppies, rock shapes and succulents, and then showed them to her. She would kind of stare at them but if she stared longer, I thought, ‘Okay, she must have liked this one,’” Kate recalls. “The poppies were definitely her favorite. She was just a few days old but was already part of my design process.”