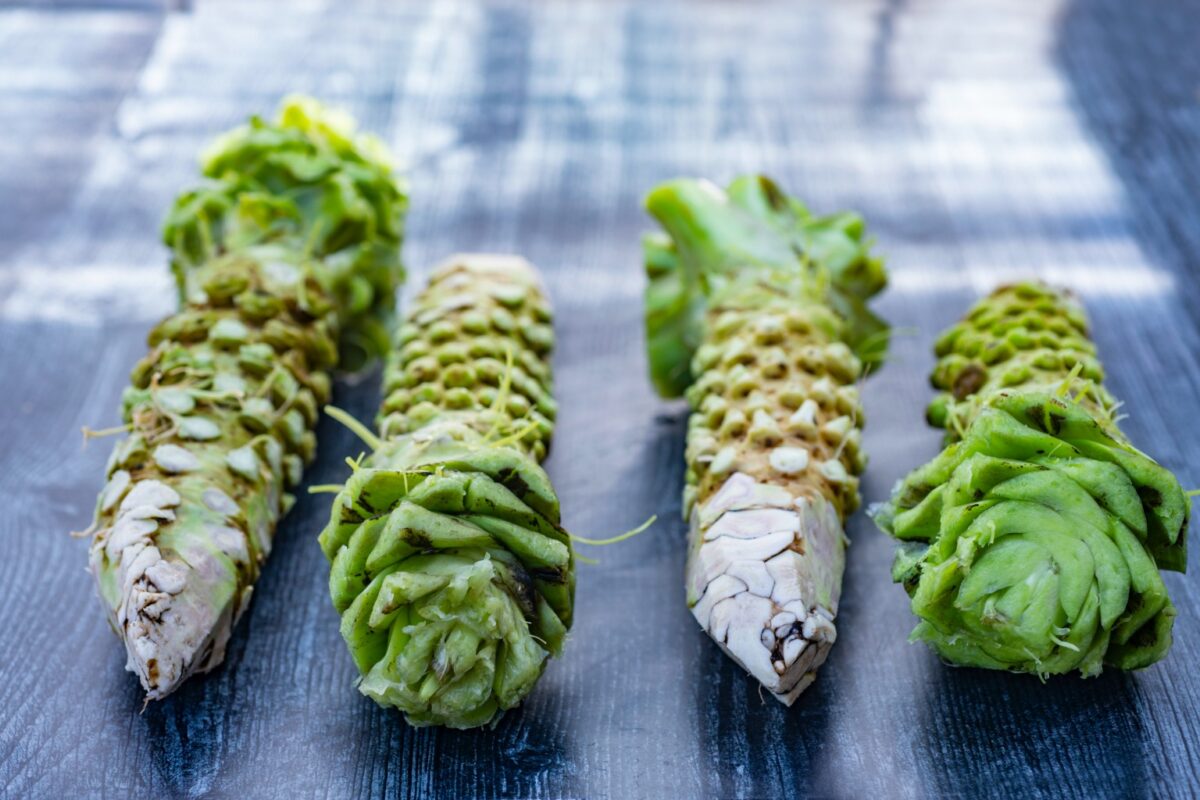 Green paste builds up on the grater. Jeff sets the stem down, reminding me to wait a few minutes for the chemical reaction to take place. The ground wasabi’s heat level peaks between five and twenty minutes, no sooner and no later. We talk for a few minutes, and then Jeff swipes his finger against a lump of wasabi, puts it in his mouth and nods his head. It’s ready.

I put a hunk of fresh wasabi in my mouth, smelling its earthy scent, noticing its moist consistency and light green coloration. A moment after contact with my tongue, the vegetable’s heat warms my upper chest and tingles up my sinuses. The actual taste is sweet, hitting the taste buds in the back and sides.

I’m here at this farm in Half Moon Bay to learn more about a plant-based condiment I usually avoid at the typical local sushi restaurant. Surprises abound, including how two electrical contractors came to be the Peninsula’s wasabi kings.

In 2011, Jeff Roller and Tim Hall were searching for a niche business they could call their own. They wanted to do something where they wouldn’t be constantly underbid for work. Then Tim discovered that the bright green wasabi paste he enjoyed with his sushi wasn’t the real thing. The majority ingredient in a tube of wasabi is horseradish dyed green with little to no actual wasabi plant content.

Both Jeff and Tim became fascinated with the wasabi plant. Its medicinal potential, the challenge of growing it and the fact that wasabi was being faked in the marketplace contributed to their decision to found Half Moon Bay Wasabi. “Nobody else was growing wasabi in California. Some people tried, but nobody was successful,” Jeff says. 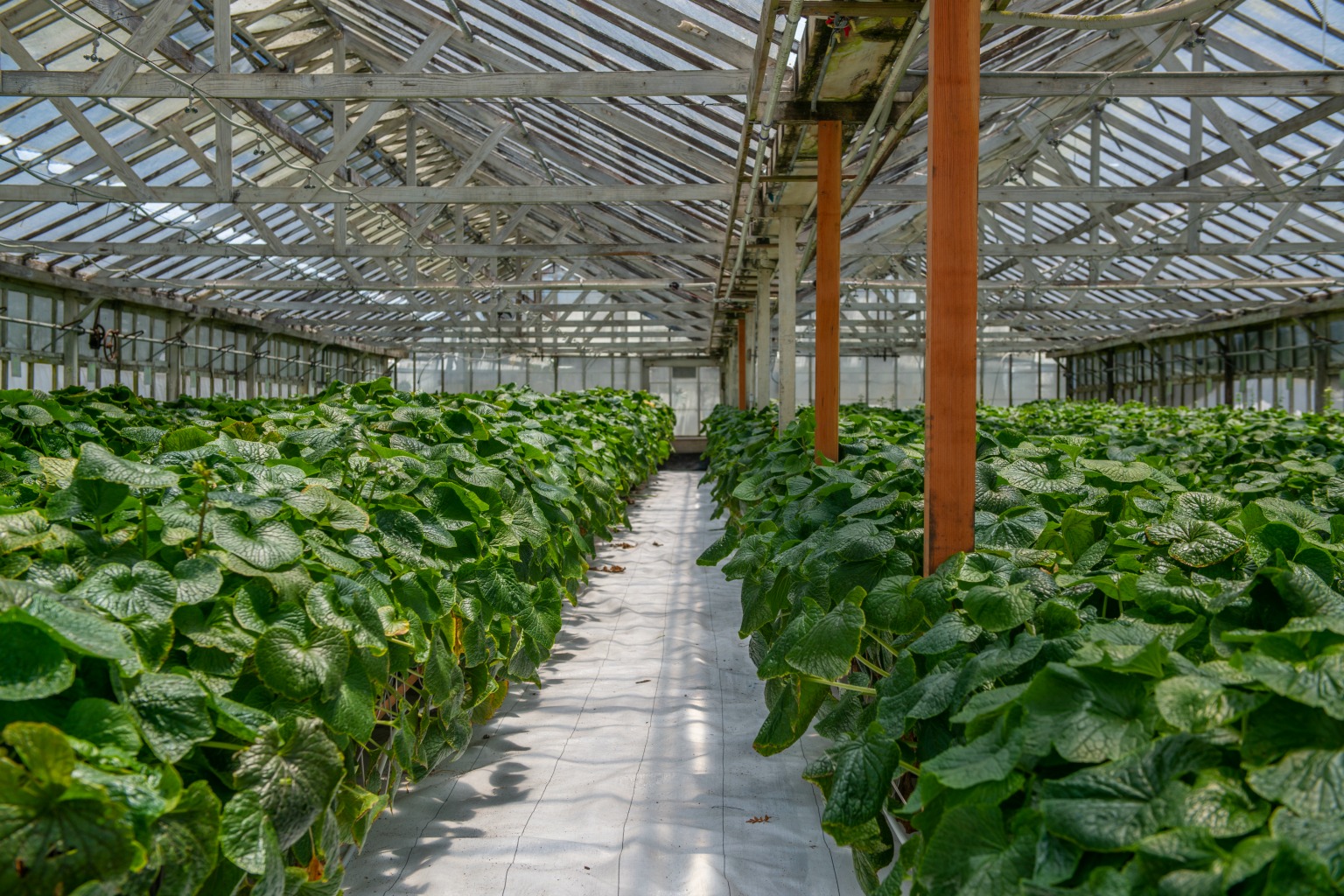 After comparing wasabi’s native growing conditions in Japan to resources available in Half Moon Bay, Jeff and Tim decided that growing wasabi in greenhouses might work. They leased a few dilapidated greenhouses and used their construction skills to rebuild them. As Jeff tells it, “The greenhouses weren’t being used, and the weeds inside were as high as trees.”

The pair began growing plants in one of the greenhouses. Tim had previous agricultural experience, and both have degrees in biology. “Tim tends to deal with building things, setting things up and repairing things when they break because things break all the time,” Jeff says. “I’m generally the one who’s going out and scouting for bugs and just going through the greenhouses looking at all the plants for disease.”

It takes 20 months to grow one wasabi plant, so when Jeff sees signs of bug infestations or disease, it’s a big deal. In the beginning, the farm experienced multiple crop failures, mostly due to bacterial and fungal infections. “It’s a weird plant. It’s semi-aquatic with unique needs from other greenhouse crops,” Jeff explains. Creating the right balance between dry and wet conditions is a big challenge for wasabi growers.

After a virus wiped out two greenhouses and an instance when bugs came in and destroyed a bunch of crops, Jeff felt like quitting. “I was fed up. I would help Tim throw away all the plants and do what we needed to do to clean up,” he recalls. After those losses, Jeff spent a few weeks away from the farm to clear his head. “Tim would have some ideas, a new way to do it to prevent it from happening again. I’d buy in and come back.”

When the wasabi plants started to look good, Jeff and Tim expanded their farming to more greenhouses. They took their first decent wasabi rhizome to the sushi chef at Sushi Main Street in Half Moon Bay for validation: “The chef looked at it, then looked at us, and asked, ‘Where’d you get it?’ We said, ‘Right here in Half Moon Bay.’ He stared at us in disbelief.” Then, the chef sampled the fresh wasabi and gave his thumbs up, to Jeff and Tim’s delight.

Nine years later, Half Moon Bay Wasabi’s five greenhouses are producing long rows of healthy wasabi plants. The greenhouses capture the sun’s heat while the cool coastal breeze rustles in under the plastic-sheeted ceiling. Walking between rows of thigh-high wasabi plants, pebbles crunch underfoot and a musty earth smell permeates the space. Over the years, Half Moon Bay Wasabi has delivered fresh wasabi to 50 Bay Area restaurants. Ongoing orders from 12 local restaurants speak for the 60 to 70 pounds of wasabi harvested every Monday. Jeff is a hero to the San Francisco restaurants where he hand-delivers fresh wasabi and is often greeted by an uproarious cheer of “Wasabi!” from grateful staff. 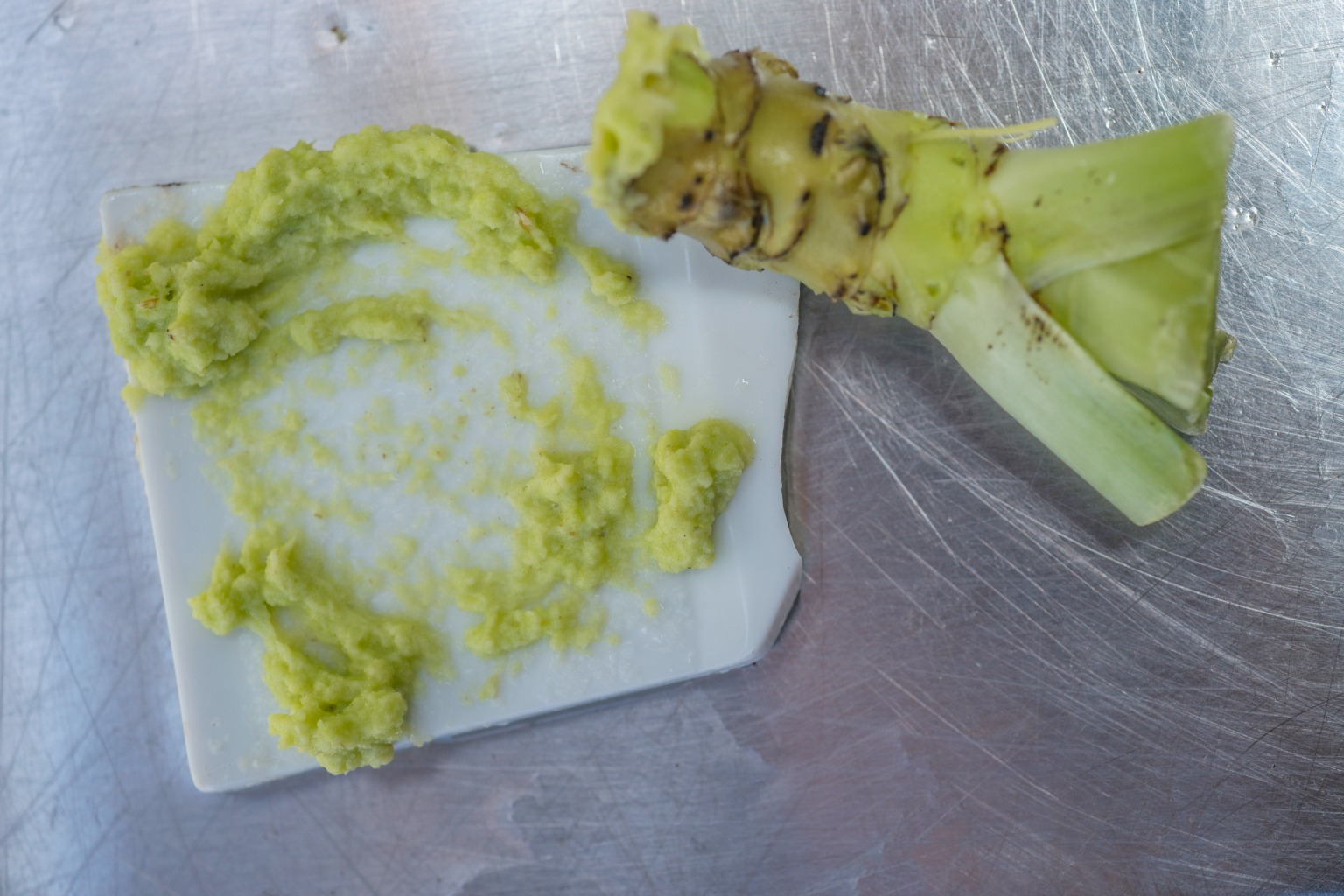 Each part of the wasabi plant is edible, not just its nub-covered rhizome. The wasabi plant’s multiple long-stemmed veiny leaves add flavor to green salads and make great sashimi wraps. Its delicate flower blossoms are a favorite garnish for chefs looking to add beauty and heat to their dishes.

Local foodies can get Half Moon Bay Wasabi on their plates one of two ways: dine at a high-end restaurant with Half Moon Bay Wasabi on the menu, or place an order through the farm’s website to have fresh wasabi, rhizome or stems and leaves, delivered in a chill pack to their door. A half-pound order of wasabi rhizomes is currently $70, shipping included, and is enough to satisfy the curiosity of wanting to try the real thing. A partially grated rhizome will last about ten days if kept in a Ziploc bag in the refrigerator. Jeff says that you can’t freeze wasabi, but you can submerge it in water, changing the water every few days, with the wasabi lasting about two weeks.

Now that Jeff and Tim are on the cusp of having created a predictable farming method for growing wasabi in Half Moon Bay, they are looking for investors to help them ramp up production. Proud of their innovations and discoveries, they have cracked the intricacies of wasabi farming. “We’ve developed a growing methodology to scale up production, drop the price and bring authentic wasabi to the masses,” Jeff says. hmbwasabi.com