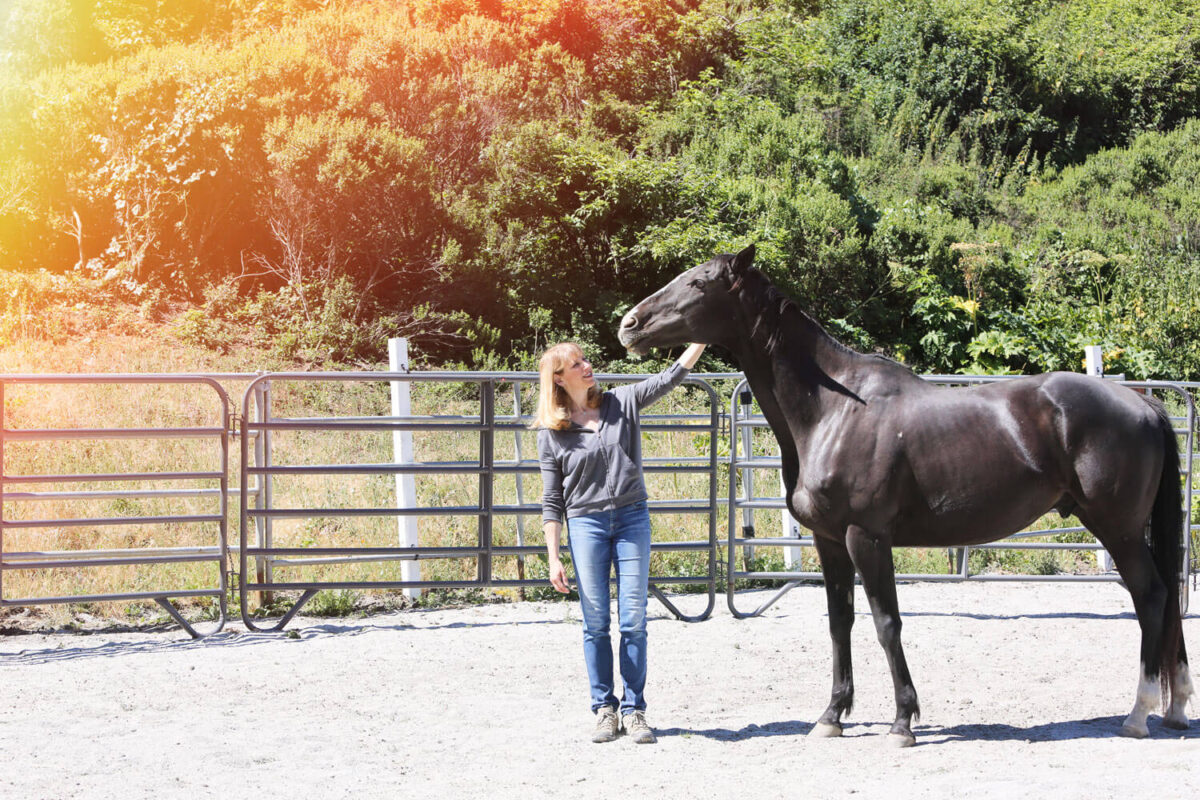 A quick trip over 92 followed by a left on Skyline and I see the turn-off for Woodside’s Ciara West Equestrian (CWE). Bay Area riders come to this 145-acre facility for horse boarding and training, and indeed, I spot several heading out on the property’s panoramic trails.

I am also here to see a horse, but I’m anticipating a very different experience: Equus Coaching, quite simply, life coaching with horses.

Standing by a 50-foot-diameter round pen, CWE founder Steven Ciarametaro introduces me to the equine mindset—which is shaped by horses being both prey and herd animals. “There are two questions horses are always asking themselves,” he says. “Number one is ‘Am I safe?’ and the other is ‘Are you in charge or am I in charge?’”

Steven goes on to explain the history and main principles of Equus Coaching. Back in 2006, renowned life coach and ‘horse whisperer’ Koelle Simpson founded the Koelle Institute for Equus Coaching based on a horse’s intrinsic ability to provide direct and honest feedback. Drawing from her own experience, Simpson recognized the potential in naturally-skittish horses to be four-legged guides to deeper insights. “We work with horses because horses are very sensitive to their environments,” Steven says. “Through evolution, they’ve been able to protect themselves by being acutely aware of what’s going on around them.” 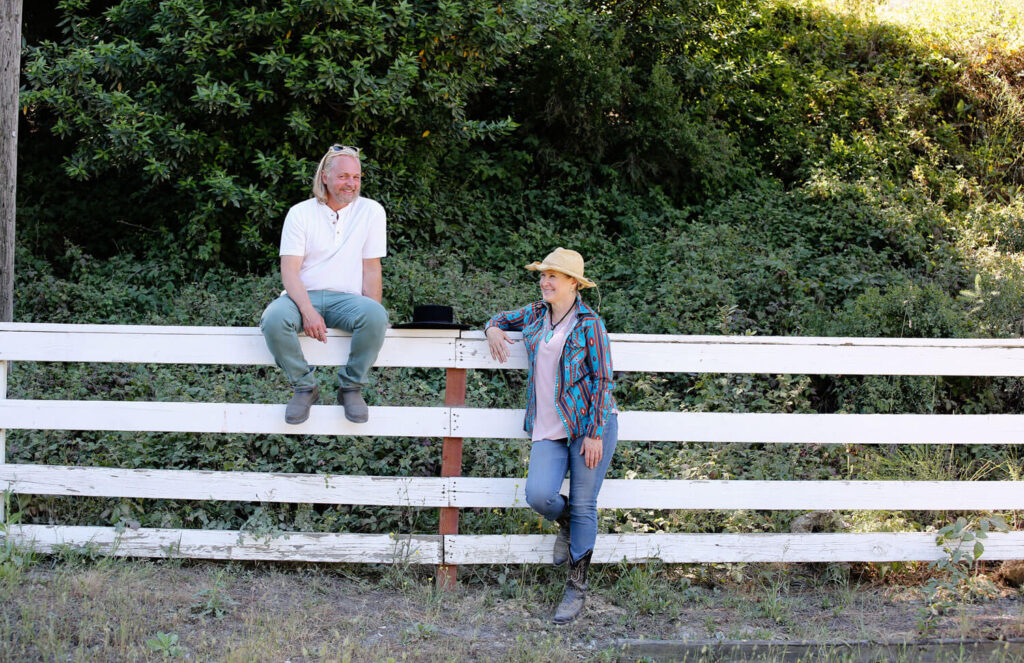 As Steven talks, I check out Sparrow, a 1,200-pound former police horse who appears to be hanging out contentedly in the pen. A mare in a nearby pasture neighs. Suddenly hyper-alert, Sparrow’s ears twitch up and whip toward the sound. I learn that if I watch Sparrow’s ears, I can see where his attention is—and what it means when he drops his head, makes licking and chewing gestures and expels loud gusts of air. “You can see he’s releasing tension. He’s relaxing a bit with us,” Steven interprets. “Koelle refers to Equus as the language of horses.”

Equus is a relatively new language for Steven, who also happens to be fluent in seven human ones. Recently certified as an Equus Coach, he previously spent nearly 20 years in the Silicon Valley tech world focused on software training and certification. While still working full-time, he rediscovered riding, which led to buying his own horse and then taking over the Woodside facility in 2015 to launch his own boarding and training business. A few years into it, the Koelle Institute contacted Steven about holding local Equus Coaching workshops at CWE. Intrigued by what he saw happening, he also connected with a workshop student, Nina Clarke Ericson, a Palo Alto-based clinical psychologist who specializes in life, leadership and dating coaching.

“I’ve always loved horses,” says Nina, “and when I found out about Equus Coaching, I literally cried. I thought, ‘Wow! This is the perfect marriage of two of my greatest passions: helping people and horses.’” Nina received her Equus Coaching certificate through the Koelle Institute’s one-year program and immediately followed it with the Master Facilitators certification, which equipped her to conduct group sessions. She bases her Equus Coaching practice at CWE, meeting clients here several times a week.

“This is not therapy, but you can go deep,” Nina says, citing issues ranging from death, divorce and depression to work transitions, overeating and empty nests. “Clients learn to identify and express authentic feelings and that’s reinforced by the horses,” she says. “My preference is to do almost all my work up here. It’s experiential learning, so it’s very powerful; it gets into your brain better.” 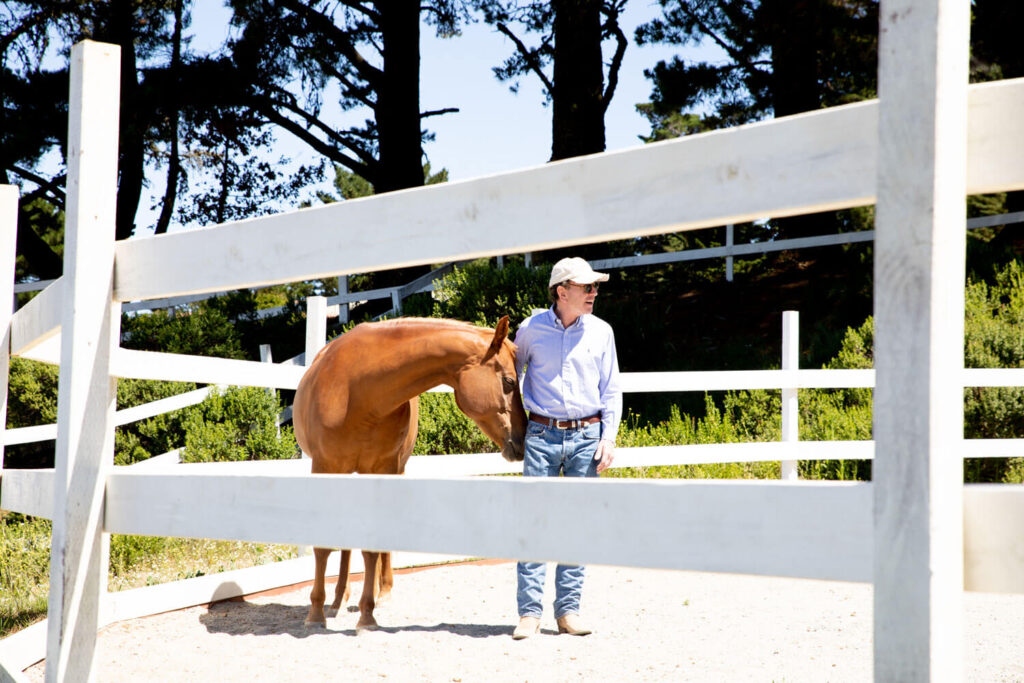 Steven explains it this way: “The horses are truth-tellers—they tell you what you need to know. When your outer reality is aligned with what you’re feeling inside, that’s when the horse feels a connection with us. It’s the same thing they’re looking for within their herd, and the horse reacts in a way that’s immediate and visceral. You feel it as much as you see it.”

After the initial briefing, I watch a demo with Nina. Sparrow eyes her as she enters the pen and approaches her with curiosity. Nina greets the horse by blowing air off the back of her hand directly under his nostrils. Sparrow inhales Nina’s breath and exhales deeply in response. They commune for a bit and then Nina starts walking away. Sparrow notes her movement and begins to follow.

Stepping out of the pen, Nina gestures that it’s time for me to go in. “Do whatever you want,” she counsels.

I don’t want to be too aggressive since we’ve barely met, so I stand a distance away and look directly at Sparrow, willing him to come to me. A piece of hay catches Sparrow’s attention. Another horse whinnies, and his ears flick in that direction. I smile warmly at him, trying to look appealing. Nothing is happening. I can feel my smile becoming forced, even desperate. Minutes go by.

Nina checks in. “What do you want to do?” she asks me.

“I want to interact with the horse,” I respond, feeling dejected. “Then why aren’t you?” she questions. “I don’t want to impose on him,” I reply.

Nina thinks on this. “Why don’t you go up to him,” she suggests, “and if he doesn’t want to interact, he’ll tell you.” So I approach Sparrow, greeting him with the same exchange-of-breath I saw Nina demonstrate. Sparrow exhales his tension with an audible sigh. I start to pet him, and soon he is nuzzling my shoulder.

Nina and I talk about what just happened, which causes me to reflect on the many times I’ve hesitated—didn’t introduce myself, stake a claim or make a request—for fear of putting someone else out. “The way we do anything is the way we do everything,” offers Nina, quoting a favorite saying of life coach Martha Beck. Through this one simple interaction with Sparrow, I know exactly what she means.

“What does that feel like when you make a decision that really fits—that’s coming from your heart, your gut—rather than what you think you should do?” Nina queries further. I register the feeling so I can remember it. In a later session with Steven, I greet Sparrow differently. I know what I want, and I act on it. And when I walk away from Sparrow, occasionally glancing back with a confident smile, I hear the gratifying sound of him clip-clopping behind me. 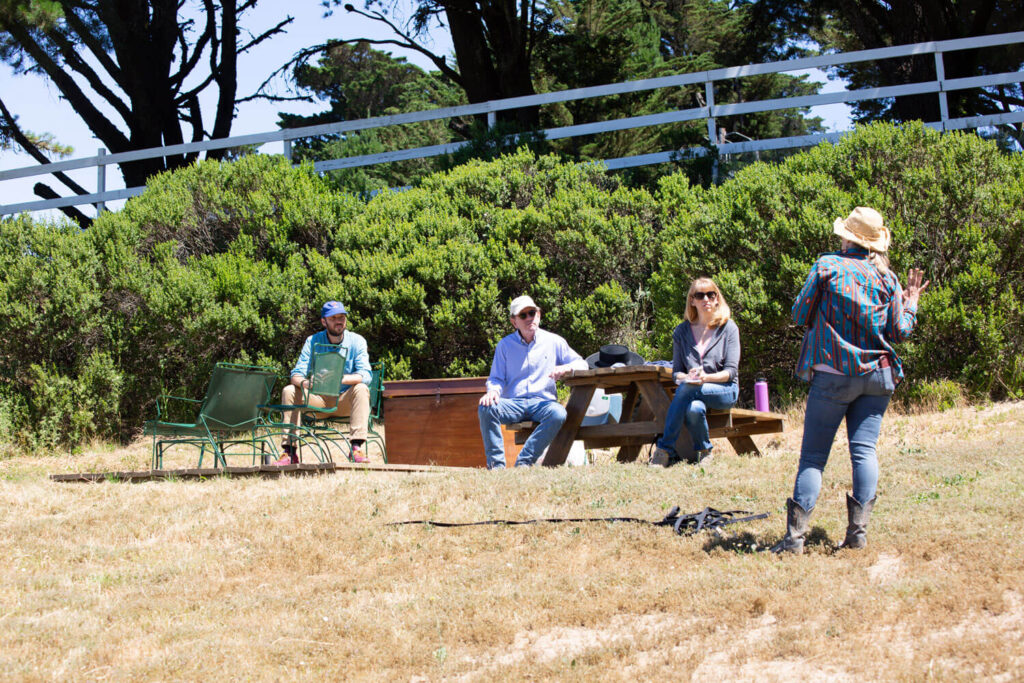 A bit later, my PUNCH cohorts—publisher Sloane Citron and managing editor Silas Valentino—arrive at CWE, so we can better understand what happens in a group session. After going through individual briefings and sessions (Sloane is matched with a mare named Rosie and Silas with Odey), we watch as the pens are reconfigured into a 120’ by 60’ arena. Nina gives us the lowdown on herding—how we’ll set goals and work together as a team to move the horse around obstacles. “You will not be able to talk to each other; you can only communicate non-verbally,” she explains. “We use this for families, couples and executive teams—it shows how you communicate with each other, but it’s also a really fun bonding experience.”

Nina and Steven demonstrate first. Sparrow, who is now rested, responds readily to their tight movements and gestures. Our first turn in the arena doesn’t go so well. Silas isn’t quite following directions. I wave my hands in exasperation. After attempting to intercede, Sloane steps back and becomes an observer. When we break to discuss, we talk about how our behavior maps to office dynamics—how we naturally fall into certain roles and what we can do to better align as a team. 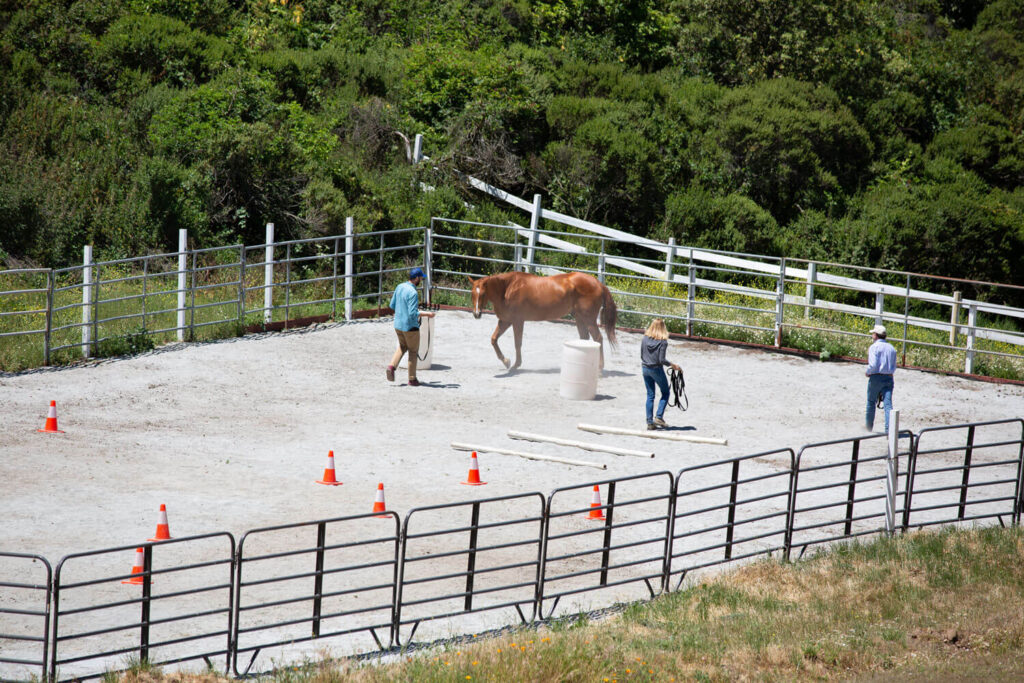 When we try again, we watch each other closely for cues and start gesturing more effectively. Sparrow responds to our uptick in confidence. We get him to maneuver around a barrel and trot up the side of the arena. Eyeing a barrel in the far corner, I point to it with clear intent. We each move into position, but it looks like Sparrow is going to cut the barrel just short. With a surge of collective energy, we somehow divert Sparrow’s direction, who makes the intended turn at the very last second. Words burst forth: “We did it!”

“Sometimes this just sparks a realization and then you know what to start working on,” Steven comments as our session wraps up. A final question comes to mind. “Is this easier if you’re a horse person?” I ask, thinking regular riders must have an inherent advantage. Steven shakes his head. “When you’re riding a horse, the horse can’t not react,” he responds. “Here, you’re asking the horse to interact and giving the horse the opportunity not to—that’s the really powerful thing.” 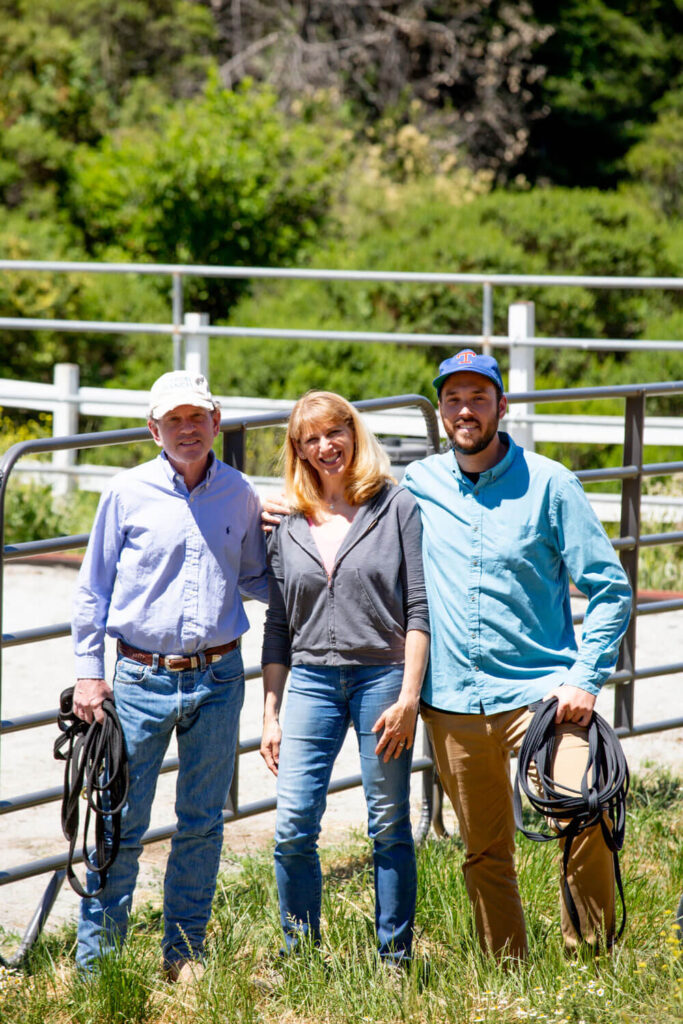