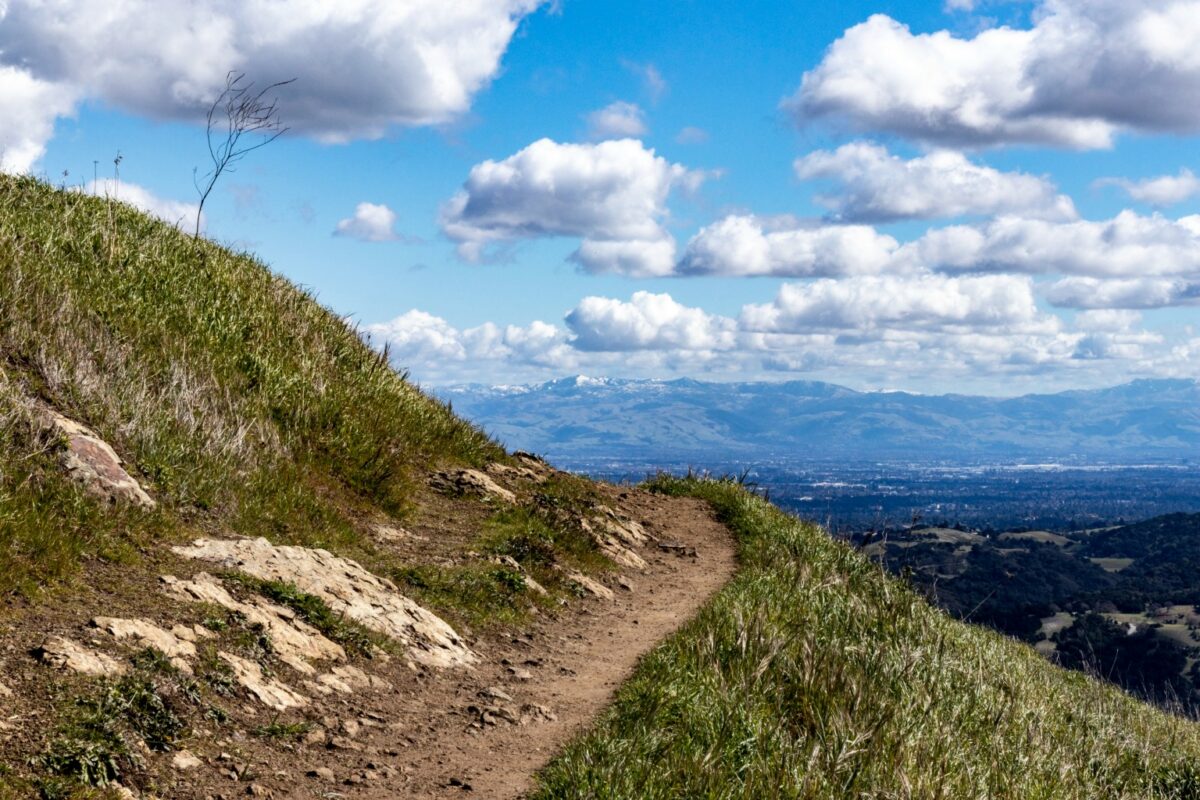 As you ready yourself for the Thanksgiving holiday and feast, here’s a sobering note: According to the Calorie Control Council, the average person will consume 3,000 calories when sitting down for the traditional turkey dinner. And that doesn’t count drinks, appetizers and dessert!

But don’t despair. Here are four Peninsula hikes (including one good, long walk) that can make your holiday feasting almost guilt-free. Start moving now, and you’ll have a calorie deficit by the time the big day comes in late November!

Thought by many to be the jewel of Midpeninsula Open Space District preserves, Windy Hill features almost everything the Coast Range has to offer—grasslands, oak woodlands and fir and redwood forests. You ascend on a series of switchbacks, a climb of just under 2,000 feet, to reach Skyline Boulevard. Spectacular views of the Pacific Ocean to the west and the mid-Peninsula and the San Francisco Bay to the east are the payoffs. Shortly after leaving the parking lot, you’ll come to a fork with the Spring Ridge Trail on the left and the Betsy Crowder Trail straight ahead. We prefer the latter, which passes through shady oak woodlands interspersed with some grassy areas. In a little over a half-mile, you’ll join Spring Ridge Trail on your right, which will take you all the way to the top. While there are some serious butt-kicking pulls, there are also brief flat stretches that provide catch-your-breath opportunities. When you hit Skyline Boulevard, take the Anniversary Trail on your left. Before looping around to the picnic area—also on Skyline—you can ascend one of Windy Hill’s peaks to take in the 360-degree views. From the picnic area, the Lost Trail runs parallel to Skyline before reaching Hamms Gulch Trail, which winds back down on the other side of the canyon from Spring Ridge Trail. It eventually rejoins Spring Ridge, which will take you back to the parking lot.

+ Parking lot is on Portola Road next to the Sequoias retirement complex; overflow parking is at Portola Town Center

+ Terrain is dirt; steep both ascending and descending

+ Find more information and a trail map at
openspace.org/preserves/windy-hill

Unlike Windy Hill, which basically has one trail up and another down (with some variations along the bottom), Edgewood provides multiple loop options of varying distances within its 467 acres. It shares with Windy a too-small parking lot on popular days. Edgewood’s mix of woodlands and grasslands translates to a lot of wide-open spaces, perfect for crisper fall and winter days. The route we enjoy most is leaving the parking lot, walking up by the restroom/picnic area and then picking up the Sylvan Trail, which climbs steadily before joining the Serpentine Trail and then the Sunset Trail. From this trail, you get expansive views of the Coast Range to the west. After a half-mile on the Sunset Trail, Ridgeview Trail appears on the right. You’ll ascend again, sheltered by woodlands. Pick up Franciscan Trail and then Edgewood Trail back to the parking lot.

+ Open to hikers and equestrians; no dogs or bikes

+ Restroom in the picnic area near parking lot

+ Find more information and a trail map at parks.smcgov.org/edgewood-park-natural-preserve

It’s the location that makes this post-holiday feasting hike ideal. With fall (and extending into winter) come clear skies and less wind along the ocean. You can be shivering in the low 40s on the Peninsula while it’s 20 degrees warmer at the coast. Of note, the famed Mavericks surfing area is a half-mile or so offshore and can be viewed from the bluff top. You can also spot porpoises, dolphins and a variety of whales depending on the season; humpbacks are most predominant in November. There are various trails that run parallel to the coastline, rolling slightly up and down. Some swerve inland for a bit before rejoining Jean Lauer Trail located almost smack-dab on the middle of the bluff. We stay coast-side going north, taking the Ross Cove Trail and Frenchman’s Reef before turning back on the Pillar Point Bluff Trail with views of the Half Moon Bay Airport. This trail joins the Jean Lauer Trail briefly, and a cutover trail rejoins the Ross Cove Trail back to the parking lot. It’s near impossible to get lost with the ocean always on your right or left.

+ Terrain is packed dirt; rolls up and down

+ Open to hikers, cyclists and dogs on leash

+ Find more information and a trail map at
parks.smcgov.org/pillar-point-bluff

Recognizing that not everyone desires a butt-kicking hike, we offer this flat, stroller-friendly walk with a respectable distance. The bonus is spotting vastly different kinds of birds: the big aluminum ones that take off from SFO and a variety of shorebirds that hang out on the Bay. When complete, the Bay Trail will cross 47 cities and nine counties over a distance of 500 miles. Today there are 350 miles, including this segment that begins at Bayfront Park just south of SFO where there is a lot with two-hour free parking. After starting out, you’ll pass the Burlingame Bird and Plant Sanctuary, at which point you’ll need to walk along Old Bayshore Highway for a short distance. We turned right at Bayside Park/Fields and then walked along the east side of landfill before encountering the Burlingame Recreation Lagoon, a bit of a hidden wonderland, given nearby Highway 101. There’s another stretch along Old Bayshore before turning bay-side once again, returning with Anza Lagoon on the left and the Bay on the right.

+ Terrain is flat and paved

+ Open to walkers, cyclists and dogs on leash

+ Find more information and a trail map at baytrail.org